Their flight was delayed, so these traditional Irish musicians decided to make the most of it. 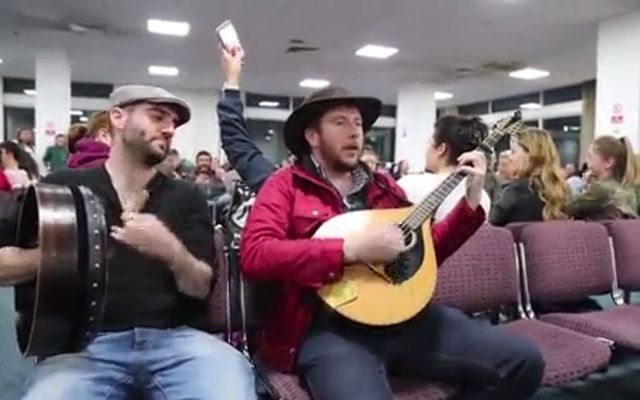 Nobody likes a flight delay, but what's a passenger to do when one inevitable occurs? There's the chair nap method, the expensive airport bar pints, the stare at your phone for hours approach, and of course the hover by the airline desk asking questions every 5 minutes tactic.

One group of Irish trad musicians had a different idea - why not turn a two-hour flight delay into a session?

"We could tell that everyone was a little bit unhappy about this and Geoff [the banjo player in the video] suggested that we play a bit of a music session," Daoiri Farrell told The Irish Independent.

'I then proceeded to sing a song. I picked one that I thought everyone would know, 'Galway Girl' and it went down really well."

Well indeed! The other passengers seemed to agree.

This isn't the first time Irish trad music has made air travel better. A céilí session, complete with dancing, broke out on an Aer Lingus flight to the US in 2016, and another Irish sing song took place on a Ryanair flight from Ireland to France.

How do you make the most of a flight delay? Let us know in the comment section.