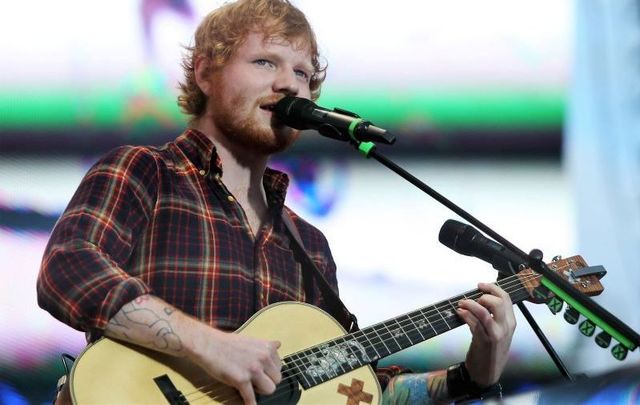 Ed Sheeran, our favorite honorary Irishman, recorded his hit “Thinking Out Loud” in Irish for an album named “CEOL 2016.”

For the past number of years, Conradh na Gaeilge and their hit radio station Raidió Rí Rá have produced an album for Seachtain na Gaeilge (Irish language week) on which the biggest and brightest in Irish music sing translated versions of their songs, and in 2016, the first track featured pop superstar Ed Sheeran.

It’s been known for a long time that Ed is a big fan of Ireland where he spent a lot of time as a kid with his family, especially his grandparents, and he’s spoken before about his soft spot for the music venue Whelan’s in Dublin where he saw Damien Rice perform for the first time.

The singer also has some tattoos in Irish. If that’s not dedication to the Irish language, we don't know what is.

McDermott approached Sheeran to see if he’d be interested in taking part and of course, he said yes!

What with the pop star's hectic schedule, however, the chances of getting together to help him record the song looked impossible and they had all but given up hope when McDermott received a phone call from Ed in Australia where he took time out from his tour to record the song himself overnight.

How fantastic is this!! #EdSheeran promoting the Irish language by singing Thinking Out Loud as Gaeilge. IONTACH! https://t.co/y5GzdNIcWI

In tears here bc @edsheeran took the time to translate learn and sing thinking out loud in Irish on @RTE2fm @eoghanmcdermo legend !

As it happens, the song was translated by Seo Linn themselves, and McDermott sounded out the lyrics phonetically for Sheeran so he could get his pronunciation down.

"Getting Ed Sheeran to record a bespoke version of one of the biggest songs in the world is incredible," McDermott said, "the fact he is singing as Gaeilge makes it all the better".

"Ed and the host of other incredible musicians on our CD shows that the use of the Irish language is being revolutionized at the moment, particularly in music. This album shows that anyone can speak as Gaeilge and that we should all give it a go."

“Ag Smaoineamh Os Ard” was revealed as the first track on the album when McDermott officially released it on his 2fm show this week. Other artists featured include Kodaline, Daithí (who we heard a few weeks ago with this sweet remix of an interview with his Granny), and of course, our favorites, Seo Linn, with their own new version of famous Irish song “Oró Sé do Bheatha Abhaile.”

The album in full was distributed free to schools and universities in 2016, and 100 copies were up for grabs at the Conradh na Gaeilge Facebook page.