WATCH: Dingle Coast Guard gets in on the #Jerusalema dance challenge fun

The Irish Coast Guard has since advised all of its units to not partake in the #Jersualema dance challenge. 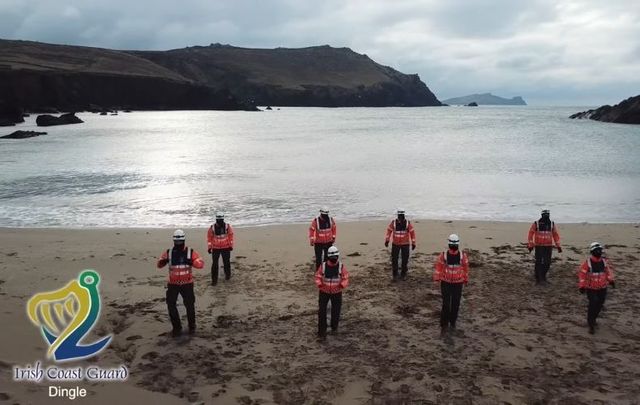 The Dingle Coast Guard filmed their own version of the #Jerusalema challenge. Ciarán Williams, YouTube

The Dingle Coast Guard filmed their own take on the viral #Jerusalema dance challenge, but have since been told by upper management that they cannot "produce dance videos for social media."

The Dingle Coast Guard in Co Kerry said they decided to make their own #Jerusalema dance video "as an act of solidarity with other frontline services who have made videos" and to give people "a bit of a much-needed lift."

The now-viral video, shared online by Ciarán Williams, features Dingle Coast Guard members dancing in some of the most scenic spots in the southwest of Ireland, including Clogher Strand and the Slea Head route.

The Dingle Coast Guard's version of the #Jersualema challenge comes after An Garda Síochána, Ireland's police force, released their own video dancing to the song by Master KG in response to a "challenge" from the Swiss Police.

Indeed, the Dingle Coast Guard's video has been well received across social media. Williams' post on Facebook has so far been liked more than 2.5k times and shared more than 1.7k times.

"Absolutely fabulous well done lads!!," wrote one person, while another said "Fantastic well done and super scenery! Such talented dancers." Another commenter wrote: "Love it. Well done all and thanks for all your service."

Despite the generally positive feedback, the Irish Coast Guard has since issued a letter advising its members to not partake in such dance challenges.

According to the Clare Herald, the letter said in part: "There have been several requests from CGUs to participate in unit dance videos since the weekend. I wish to advise that it is not permitted for units to assemble personnel to produce dance videos for social media, or indeed to assemble for any reason other than for reasons central to a unit’s operational objectives.

It continued: “Where likelihood of exposure to a hazard is increased, such as through unnecessary gatherings of unit personnel, this increases our likelihood risk rating and weakens our risk mitigation strategy."

"Our primary aim throughout this pandemic has been to maintain our operational readiness to respond to SAR taskings. Thus far we have achieved this, and it is imperative that each of us continue this disciplined and methodical approach towards safeguarding this core objective,” the letter added.