This effort by staff and residents at an Offaly nursing home will make your heart lighter. 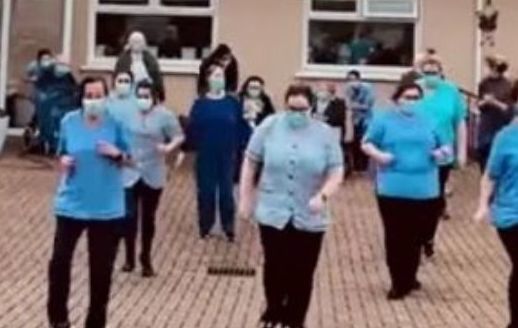 Residents and staff at an Irish nursing home have brilliantly taken on An Garda Síochána's viral Jerusalema dance challenge in a video that will make your day.

Ealga Lodge Nursing Home's staff and residents followed in the footsteps of police officers around the country by tapping their feet to Master KG's viral hit "Jerusalema".

The video begins with a group of staff members dancing to the popular song outside the Offaly nursing home. One member of staff showed off her Irish dancing moves before several nursing home residents were led outside to take part in the dance.

Wheelchairs and Zimmer frames were no obstacles for these enthusiastic residents who eagerly took part in the viral sensation.

The video has unsurprisingly been a huge hit on social media and many have called it inspirational.

Look at this..... such a feel good factor. Well done to all in Ealga lodge nursing home 👏👏👏 @NursingHomesIrehttps://t.co/aDS24E1ckO

"We are overwhelmed with all of the likes, shares and lovely comments on our video," the nursing home staff wrote on Facebook.

"We are so proud of our amazing team here in Ealga Lodge, where we work hard to create a fun and friendly atmosphere for our residents. We are privileged to provide care for the most wonderful group of people and every day is a joy to come to work."

The Offaly nursing home was responding to a challenge from An Garda Síochána after their Jerusalema dance went viral earlier this week.

Officers around the country danced to the song in response to an effort from the Swiss police and called on people to post their own efforts as long as they were within 5km of their homes with their own social bubble.