Cliff diving off the Aran Islands, can you say vertigo!

Inis Mór was the incredible backdrop for the first stage of this year’s Red Bull Cliff Diving World Series. 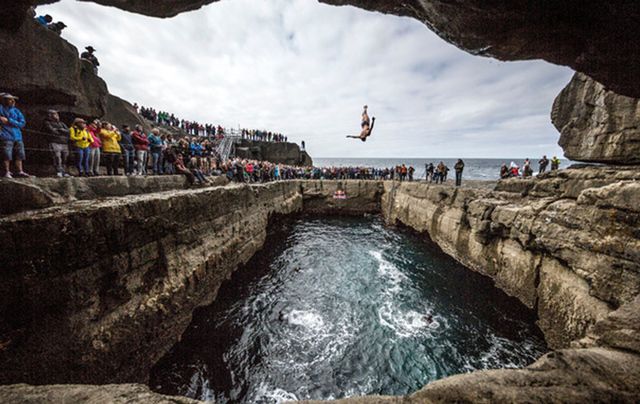 Divers in action at the Red Bull World Series on the Aran Islands, off Galway. Red Bull Content Pool

Seriously! Can you say vertigo?! The Serpent’s Lair, on Inis Mór, was the incredible backdrop for the first stage of this year’s Red Bull Cliff Diving World Series.

Thousands turned out to watch 21 cliff divers laugh “in the face of fear” and pull off some spectacular dives from the 27-meter-high platform at the Poll na bPeist, a naturally occurring limestone pool on the Aran Islands off Galway.

Apart from the height of the platform, divers had the heavy dark clouds, 55F temperatures and high Atlantic winds off the west coast to contend with, but what’s clear is that this competition is any adrenaline-junkie's dream come true.

British star Gary Hunt and Australia’s Rhiannan Iffland both came from behind to take crucial victories.

Hunt said, “When you’re up there in these conditions, your training kind of goes out of the window.”

“But with years and years of experience, you remember to block things out and you just think about the actions you have to go through to perform your dives and not be distracted.”

Iffland, who tested the waters earlier in the week with a spectacular dive from a helicopter at the Cliffs of Moher, admitted it was “the most challenging competition yet.”

After the Aran Island’s competition on June 29 the action moved to Portugal and then on to Italy in July. Red Bull’s Cliff Diving competition will then move on to the USA and Bosnia-Herzegovina in September and Chile will play host to the World Series in October.

Here are the highlights of the winning dives on Inis Mor: