July 14 is Shark Awareness Day! Did you know basking sharks are commonly found in Irish waters in spring? 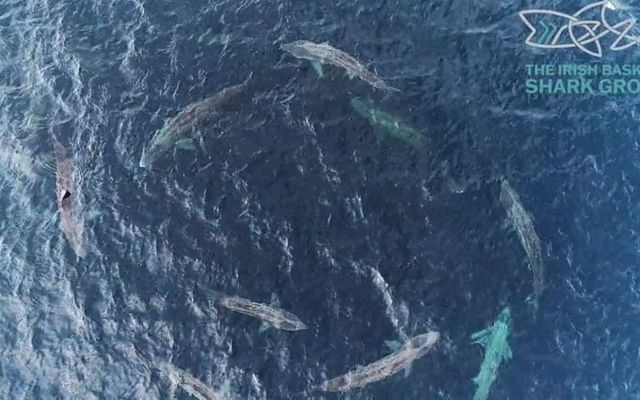 The footage was captured in August, about three months after basking sharks are usually spotted in Irish waters. Irish Whale and Dolphin Group Vimeo

An Irish shark group captured rare and spectacular drone footage of basking sharks engaged in possible courtship behavior off the coast of Clare back in 2020.

The Irish Basking Shark Group (IBSG) captured the footage in Aug 2020, which appears to show at least nine sharks circling an inflatable boat piloted by researchers with the group.

The basking shark is the second-largest fish in the world and is often found feeding in the Atlantic Ocean off the coast of Clare in the spring. However, this particular footage was captured in August 2020, three months after the sharks are usually spotted in Irish waters.

However, Dr. Simon Berrow, a researcher with the IBSG, also said that the behavior observed in the drone footage was not feeding.

"It was methodical, orchestrated behavior as if they were doing synchronized swimming," Berrow told RTÉ News.

"But we realized immediately that they were not feeding. This was something else, something special."

Researchers know very little about the courtship behavior and reproduction cycles of basking sharks. However, behaviors exhibited in the footage, like the nose-to-tail following, parallel swimming, and breaching, are all theorized as being part of the courtship process.

"This spring we collected over 60 samples from sharks off West Clare. So to get a further opportunity to take more samples, in the same location but at a different time of the year, was just too good to miss."

He also said that the drone footage allowed researchers to gain perspective of the size of the shark from above and described it as a "humbling experience."

Basking sharks are harmless plankton feeders but are unprotected in Irish waters. The IBSG is working to change that, however, and also sets out to improve people's awareness and understanding about the giant sharks.

The spectacular footage is part of the IBSG's film documenting courtship in basking sharks.