You may want to look away from these Aran Island cliffs at Dún Aonghasa on Inis Mór if you suffer from acrophobia (a fear of heights!) 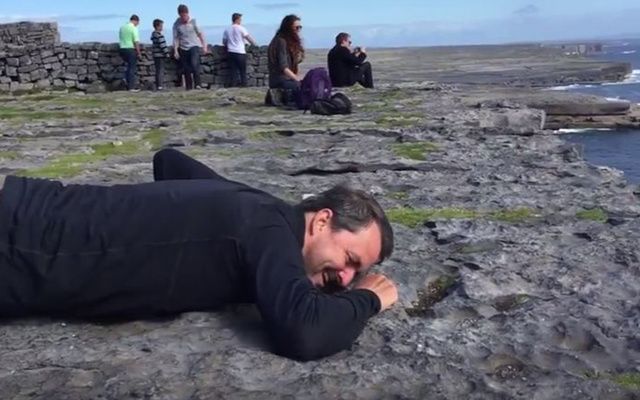 Acrophobia is the fear of heights but this acrophobe took on the incredible Dún Aoghasa cliffs. YouTube/Alex

Dún Aonghasa fort on the Aran Islands may be the most scenic place to cure your fear of acrophobia.

If you’re going to conquer your fear of heights, we can’t imagine any place in the world better than the magical Dún Aonghasa fort on Inis Mór, the largest of the Aran Islands. One brave American father recently tried to give it a whack by crawling along on his belly to the edge with some encouragement from his daughter.

According to the acrophobe’s daughter, who narrates the whole task, her father had battled through motion sickness on the ferry to even get to Inis Mór and was now determined to look down at the Atlantic Ocean from 87 meters up for just a few seconds, at least.

Visibly unnerved by how high up he is, we have to commend him for his steely determination to overcome his acrophobia. While we're not sure he’s completely cured, he can at least say he’s tried it once and now has the photo/video to prove it.

In the background of the clip, we can see the magnificent Dún Aonghasa, the most famous of the prehistoric hill forts that lie on the Aran Islands. It is not known exactly when the structure was built but it is thought to have been at some point in the Bronze Age or Iron Age. Not only is the popular tourist spot an archaeological site of great significance but it also offers some of the most spectacular views to be seen in the whole of Ireland (and that’s really saying something).