In the midst of the pandemic, Canadians flock to online Irish classes 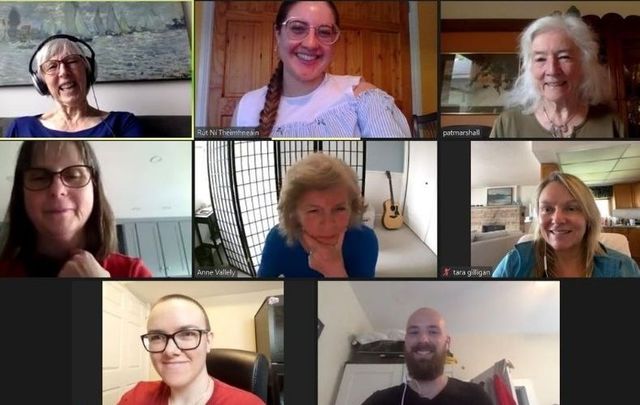 While Ireland and Canada have been in state of lock-down due to the COVID-19 pandemic and all non-essential travel between the two countries ground to a halt, over four hundred Canadians have taken advantage of the time to become better acquainted with the Irish language, thanks to a gift of free online classes provided by the Ireland Canada University Foundation (ICUF) with the support of the Irish Department of Culture, Heritage and the Gaeltacht.

The completion of five weeks of caint, craic agus cairdeas (talk, fun and friendship) came to a climax on Saturday, June 6 with a massive online party or Coisir Mhor, featuring singer-songwriter and musician Liam Ó Maonlaí, best known as the frontman of the Irish band Hothouse Flowers, himself a fluent Irish speaker and gaeilgeoir. He will be joined the virtual festivities from the living room of his home in Dublin. The remainder of the hour-long event is to be filled with story, song, and other entertainment as Gaeilge provided by the learners themselves from the comfort and safety of their homes across Canada.

This innovative project, to join Canadian ICUF teachers who were already deployed to Canadian universities in 2019 and 2020 with eager Canadian learners (Irish ex-pats who just wanted to brush-up their cúpla focal as well as Canadians for whom this was a brand-new experience) was the brain-child of James Kelly, CEO of the Foundation, who said, "At the time of the lockdown, we had a number of our Irish Language instructors still in Canada. There were a lot of great initiatives happening online to support people under lockdown, so we decided pretty quickly that it would be great to work with our scholars to be able to offer free introductory Irish classes online to Canadians”.

So in March, Kelly sent out a few fledgling tweets and some tentative emails to gauge the level of interest in such a venture. “The response was overwhelming!”, said Kelly. “We expected maybe forty or fifty people... Instead over four hundred people responded. We know the Irish diaspora in Canada is very large (over 4.5 million Canadians claim Irish heritage), and we know there is a huge interest in Irish Language and culture in Canada. Nonetheless, we were surprised to see how our offer really took off."

The idea proved to be a win-win for both instructors and students who enjoyed up to five weeks of free classes together delivered in small groups online from coast-to-coast. The ultimate aim of the classes, according to Kelly, was “to encourage Canadians of all ages and from all walks of life to connect to their Irish heritage, and it is hoped that through these online classes, Canadians will continue to seek out classes and cultural events in their own communities.”

Judging from learner responses, classes have been an enormous success. One learner from Montreal commented, “The classes were a brilliant booster of morale in these difficult times.”

And the connection between Ireland and Canada has been strengthened, enhanced, and invigorated prompting one Vancouver to write: “What a wonderful experience. Three of us from our family participated, and my eight-and-a-half-year-old son is the best at Irish among us! It really made my son feel connected to Ireland, which is something that we'd lost since the death of my wonderful aunt 10 years back. Now he can't wait to visit, and says he wants to live in Ireland someday!”

In fact, a survey conducted near the end of the course noted that 81% of respondents indicated that they were more likely to visit Ireland after these classes. Concluded Kelly, “People can develop a powerful link with Ireland though the Irish language - this is what we are looking to do - to provide create and develop such links between Ireland and Canada, so we are delighted to hear this feedback, it seems we’re on the right track!”  All this bodes well, not only for future events of this kind, but for the state of the Irish language in Ireland, Canada, and the Irish diaspora across the globe.

Anyone interested in future online classes is invited to send a message to gaeilge@icuf.ie

The Ireland Canada University Foundation (ICUF), a Charitable Trust, was established in Dublin in 1995 to build academic co-operation, greater inter-cultural understanding, and the potential for increased trade between Canada and Ireland. ICUF has made over 500 awards to Canadian and Irish scholars, to enable research visits between both countries. Further information is available at icuf.ie. ICUF is funded in part by The Department of Culture Heritage and the Gaeltacht, Ireland.