The Caherconnell Iron Festival, showcasing medieval iron smelting and forging, will take place in a stone fort in Co Clare this month. 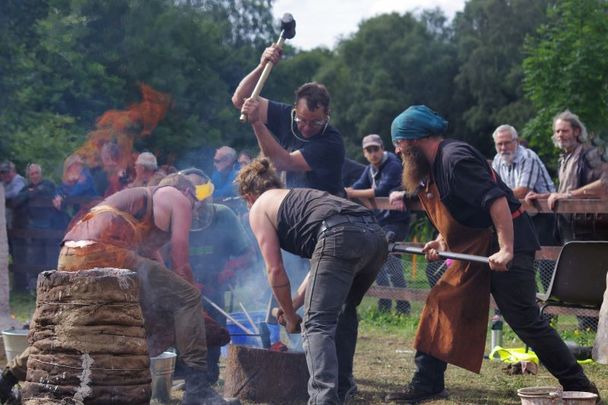 The Caherconnell Iron Festival will take place at Caherconnell Stone Fort in the heart of The Burren in Co Clare on the weekend of August 27 and 28.

The family-friendly festival will transform the 1,000-year-old fort into an open-air museum, with iron smelted on-site and forged into replica arrowheads, knives, and belt buckles. Iron experts will provide a running commentary on the process throughout the festival.

More than 50 blacksmiths and iron smelters from Ireland, the UK, the US, and Europe are set to participate in the inaugural Caherconnell International Furnace Festival.

The festival is organized by the Irish Iron Heritage Foundation and funded by Clare County Council, Fáilte Ireland, the Heritage Council, and the Geological Survey of Ireland.

On Wednesday 24 August, 25 iron smelters from all over Europe and even the US will arrive in the Burren, Co. Clare. On...

Dr. Paul Rondelez, an Irish smelting archaeologist who is a member of the Irish Iron Heritage Foundation, said that the event will demonstrate the vital role played by iron in Late Medieval Ireland.

"Archaeologists from NUI Galway excavating the interior of Caherconnell Stone Fort recently uncovered evidence of iron smelting dating back more than 1,000 years, which makes it a perfect host location for this event," Rondelez said.

"In 1580 a Spanish writer wrote ‘The inhabitants of Ireland call it Erin, which means land of iron because it is made there.’ The etymology is incorrect, but it is a nice clue to the metal still being smelted locally."

Geologist Dr. Eamon Doyle of the Burren & Cliffs of Moher UNESCO Global Geopark said the most spectacular part of the festival would be the "Birth of Iron" exhibition.

"The only materials used to make our Irish iron are iron ore and charcoal. In the skilled hands of the smelters and the intense heat of the clay furnaces, these two raw materials are transformed into a lump of very dense, red hot iron metal which is then pulled out of the furnaces," Doyle explained.

"After the birth, the iron needs to be folded (kneaded like dough) after which blacksmiths can forge it into practical objects. This Birth of Iron will happen every hour or so on Saturday and several times on Sunday."

Dr. Doyle explained that forges have existed in Ireland since at least the time of St Patrick and were the places where all the iron objects from knives and nails to spades and much more were made.

“The replacement of wrought iron by mild steel and a general change in the global economy during the 20th century led to significant changes in Irish blacksmithing,” Dr. Doyle added.

“To this day, however, blacksmiths still work in Ireland, from the farriers looking after the horse stock in the country to those hand-forging gates. You can meet many of these skilled Irish blacksmiths at the Caherconnell International Furnace Festival.”