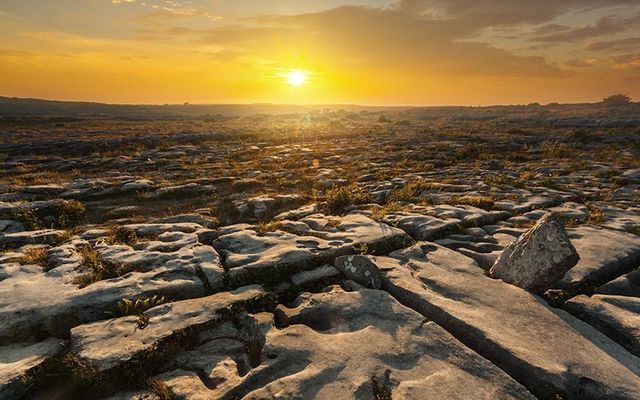 An Irish documentary narrated by Brendan Gleeson telling the story of the Burren region in County Clare is set to air on US television this month.

The two-part documentary, which attracted more than one million viewers when it aired in Ireland, will treat audiences to a visually impressive and thought-provoking story about the resilience and beauty of the famous Irish landscape.

The documentary is created by acclaimed Irish filmmaker Katrina Costello of Silver Branch Films and narrated by multi-award-winning actor Brendan Gleeson and will be broadcast to 90% of US households on PBS over the next 12 months.

Costello, who has spent 13 years working in the Burren, said in a statement that the area is like no other place on Earth.

"The most striking thing for me about the Burren, is that both the landscape and the people of the Burren have evolved to be shaped and dependent of and on each other, like no other place in the world," Costello said in a statement.

"Untangling all these mysteries is a highly complicated affair, but our cast of local experts are at the leading edge of discovery and share these amazing insights that are endlessly fascinating."

Costello believes that the documentary will give US viewers with an Irish heritage a real yearning to go to Ireland.

"I see them making their way over greenways and rugged tracks the way their ancestors might have done. I see them standing on the shoreline, gulping great lungs full of salty air, contemplating what and who tread these paths before them.

"I hope my work will inspire these visitors in recognizing the immeasurable value in treading delicately on their way, resonating in nature with a deeper understanding of the fragility of our wonderful wildlife networks."

"Symphony of Life" - the first part of the documentary - pays tribute to the nature and wildlife found at the Burren, exploring prehistoric Celtic rainforests and underground caverns. Meanwhile, "Songs of Our Ancestors" - the second and final part of the documentary - traces the genetic history of Irish people and allows viewers to witness the landscape through the eyes of their ancestors.

Consultant paleontologist Dr. Ruth Carden said during the documentary that the discovery of a prehistoric bone in the Burren "changed the history of Ireland".

"This bone just changed Irish human history, it means we have humans coming into Ireland 33,000 years ago, which changes everything for Ireland and changes northwestern Europe as a whole," Carden said during the documentary.

The Burren programs are available to purchases on-demand here.

US audiences can enter their zip code into www.silverbranch.ie to learn when the programs are screening their state.