The best Irish Halloween costumes of 2020

2020, for all its flaws, inspired some hilarious Halloween costumes. 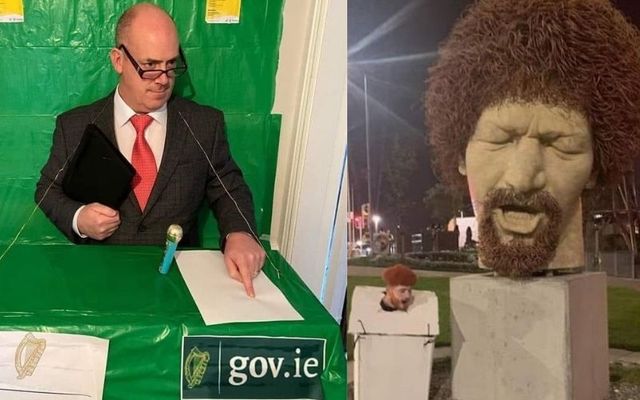 There was no trick or treating or Halloween parties in 2020, because of Covid, but that didn't stop some Irish people from getting creative! Let's see if we can get inspired for Halloween 2021.

The year 2020 was a year like no other and that undoubtedly led to some unique costumes that had never even been contemplated in years gone by.

One man's costume, for example, expertly captured the look of a man who has dominated Irish news coverage of the coronavirus - Chief Medical Officer Dr. Tony Holohan.

It is unfathomable that anyone would have thought of dressing up as Dr. Holohan pre-Covid since almost no one knew who he was prior to the coronavirus pandemic, but these are the times we live in and the costume perfectly captures the look of Holohan's coronavirus press briefings.

A young child, meanwhile, chose to dress up in a homemade coronavirus costume, recreating the stock image of the virus seen in so many news articles.

I see your Holohan costume and raise you this...? pic.twitter.com/sfyfResDbS

McDonald said that she had "serious competition" after Lynch's grandmother posted images of the 11-year-old's costume on Twitter.

The Sinn Féin leader became an increasingly important figure in 2020 as Sinn Féin's popularity surged, inspiring the young Dubliner to put the uncanny costume together.

But it was Jonathan Quinn who arguably stole the show with his Halloween costume, and it wasn't even 2020 specific.

Quinn hilariously recreated the statue of Luke Kelly's head in North Dublin and posed alongside the actual statue on October 31.

Irish viral star Tadhg Fleming and his family, meanwhile, who rose to prominence when a bat got stuck in their kitchen, went all out with their Halloween costumes for 2020, perfectly mimicking the Oompa Loompas from Willy Wonka & The Chocolate Factory.