Astuanta Niang's hilarious reaction to being labeled as "Irish" has scored her millions of views and reactions across social media. 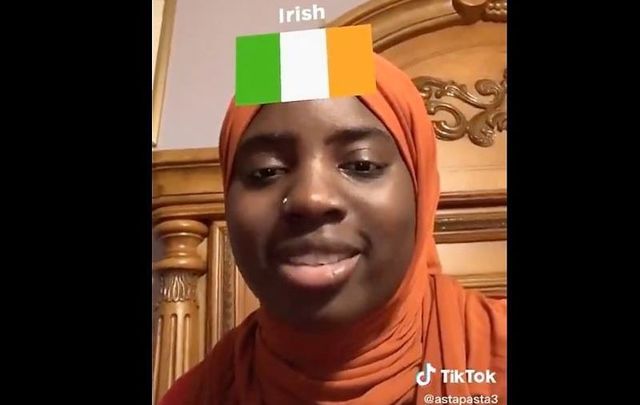 Astuanta Niang has gone viral across social media after an app labeled her as "Irish." @astapasta3, TikTok

Astuanta Niang has legions of new fans after a trendy app labeled the Senegalese-American woman as Irish.

The app, which of course is by no means accurate and only meant as a game, sees different country's flags sort across a person's face to determine what "nationality" the user looks like.

Niang filmed herself using the app for the social media platform TikTok, and her reaction to being labeled as "Irish" has made the 19-year-old a viral star.

As the video begins and the flags are sorting, Niang complains that she keeps getting the same flags before it ultimately lands on Ireland’s flag.

“Yes,” Niang says with a smile, before cutting into an attempt at an Irish reel.

A leprechaun hat, potatoes, and even a “they’re magically delicious!” get thrown into the video into the now-viral video.  Stereotypical? Yes, but it's clear Niang was only having some fun.

@shellybirla tagged Niang in the tweet’s replies, who reveled in her newfound viral fame. On TikTok, Niang’s original video has accumulated more than 1.6 million likes and 18k comments.

While the 19-year-old college student was, unfortunately, the recipient of some disgustingly racist replies across the social media platforms, by and large people both Irish and not enjoyed her video.

Niang even got a shout out from Nicola Coughlan, who stars as Clare in the hit show “Derry Girls:”

You’re one of us now, Queen ☘️ https://t.co/GsUwktITPu

THANK YOU SO MUCH FOR BEING SO ACCEPTIVE AND SWEET it makes my heart warm :)