Matthew Kelly, an Irish drone operator, made an incredible archaeological find while flying a drone in Lahinch, Co Clare in April. 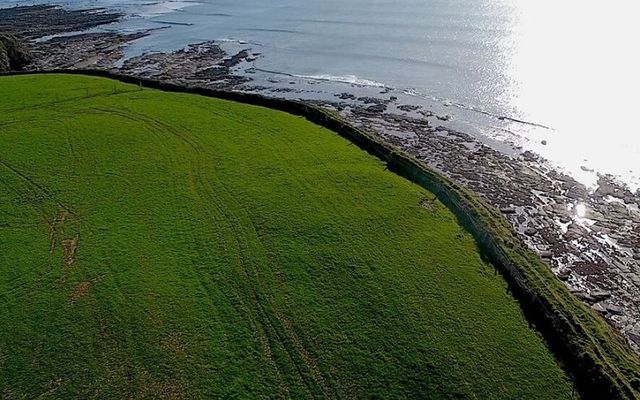 Kelly made the discovery while flying his drone during COVID-19 lockdown. Matthew Kelly Facebook

Matthew Kelly, an Irish drone operator, made an incredible archaeological find while flying a drone in Lahinch, Co Clare in April.

Matthew Kelly, a satellite, communications and electronic engineer from Ireland, found a previously undiscovered cliff fort near Lahinch in Co Clare in mid-April while flying his drone.

Read more: Have you seen the first known map of Ireland from 140AD?

His discovery had not been recorded with the National Monument Service (NMS), but the organization added the fort to its database after Kelly logged the discovery.

He posted his discovery on his Facebook page and said that he named the for "Dun Clíodna."

He didn't take credit for naming the cliff fort, however.

"The artist Jim FitzPatrick inspired me to get into Irish mythology years ago so I asked him to name the fort and he suggested 'Cliodna of the Waves', so we will call it 'Dun Cliodna' (Cliodna's fort)," he said on Facebook.

"Clíodhna is the goddess of love and beauty and is said to have three brightly colored birds who eat apples from an otherworldly tree and whose sweet song heals the sick."

A few days ago I found a previously unknown Cliff Fort in Lahinch with my drone. The National Monuments Service checked...

Cliff forts, or ring forts, are defensive forts built on cliff edges that commonly date back to the Iron Age in Ireland.

Kelly has experience filming ancient Irish sites, so he knew that he had discovered an authentic site.

"I have been filming forts and stone circles for years so I knew what it was when I found it. I emailed the National Monuments Service who checked it out and added it to their database which means it is now recorded and protected," he told the Irish Examiner.

Kelly previously discovered a group of 5,000-year-old forts in County Louth in 2018.