Here's what you need to know about the Grianan of Aileach, the impressive 'Sun Temple' of Donegal. 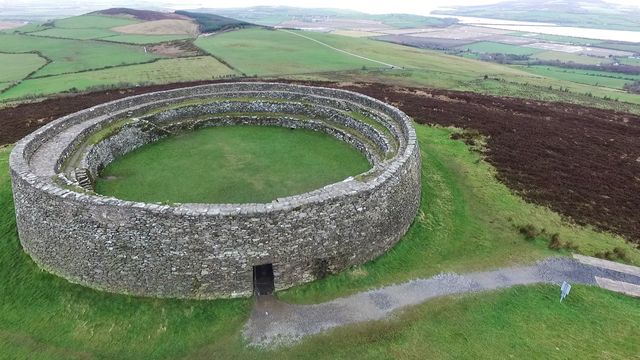 The ancient Greek astronomer and geographer Ptolemy of Alexandria drew a map of the world in the 2nd century, which shows the stone fort as one of only five Irish sites to be noted.

The Grianan of Aileach, which translates to the Sun Temple of Aileach, is one of Ireland's most impressive circular stone hilltop enclosures.

It is believed to have been built between the 6th and 9th centuries AD but may date back as far as 1700 BC.

Located on top of Greenan Hill in Donegal, the fort was built by the Great God Dagda. According to local legend, Dagda was a member of the Tuatha Dé Danann: a group of pre-Celtic Era race of supernatural beings. Legend and mythology maintain that the Grianan of Aileach was built by Dagda as a burial monument for his dead son.

Aside from the mythology, the fort was reportedly built by the Uí Néill dynasty, who used it as a gathering place for clans to discuss important matters.

However, this dynasty only reigned supreme between the 5th and 12th centuries AD - and the Grianan of Aileach is one of the Irish sites marked on Ptolemy’s map of the world, which was produced during the 2 nd century AD.

"Claudius Ptolemy (roughly AD 90168) presents us the oldest surviving account of Ireland in the form of a set of coordinates showing different geographical features or a ‘virtual map’. While Ptolemy’s map looks roughly like today’s Ireland there are a number of discrepancies. Likewise, while some locations are obvious, others are disputed or obscure."

One of the best view points in the #derry area for sure ?

The original stone fort did not survive until the present day, as in 1101 it was destroyed by Uí Néill rival, Murtagh O’Brien the king of Munster.

In 1830, the site was surveyed, and the remains of an early Christian church and a burial mound were identified. In 1860, the monument was restored by Walter Bernard, a doctor and antiquarian from Derry. Alongside Bernard, a Derry-based group called the Irish Irelanders would go to the site each Sunday afternoon to repair and rebuild the monument. The restoration work lasted from 1874 to 1879,  resulting in the Grianan of Aileach as we know it today.