Meet the Irishman who takes the world’s best animal selfies

This Irish photographer is making tons of friends in the animal kingdom and he has the selfies to prove it! 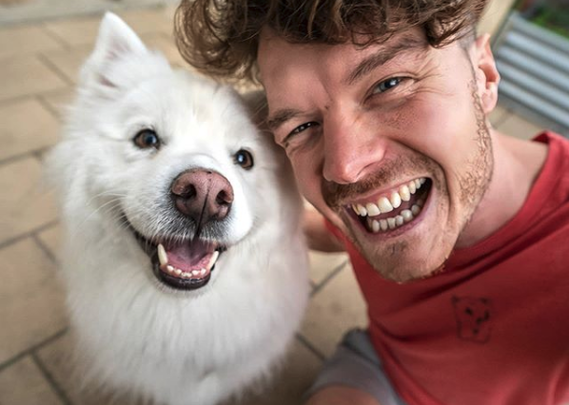 Allan Dixon takes one of his famous selfies. Allan Dixon/@Daxon via Instagram

Irish photographer Allan Dixon is making tons of friends in the animal kingdom and he has the selfies to prove it!

One quick and easy thing you can do to bring yourself some smiles in 2019? Start following Irish photographer Allan Dixon on social media.

Known as an “animal whisperer” and “the new Dr. Doolittle,” Dixon is a photographer and adventurer who’s built a name and career for himself around his extraordinary animal photography - which often includes Dixon himself in the frame.

Back in 2013, the Irishman won the “Best Job in the World” competition, nabbing $AUS 100,000 and six months in the Australian wilderness as an Outback Adventurer. He gained an impressive following and now collaborates with tourism bodies and conservation groups around the world as an adventure content creator.

He also is the leading artist in the (adorable!) arena of animal selfies. Kangaroos, giraffes, elephants, birds, cats, dogs, monkeys - he’s taken selfies with them all.

It’s clear that beyond posing and getting the perfect shot with these animals, Dixon really cares about them too. As he explains in the following video about how to take an animal selfie with quokkas - the cutest animals you’ve probably never heard of - it’s all about respecting the animals and approaching them with caution and kindness.

Dixon seems to be an especially strong advocate for the quokka, a small and vulnerable marsupial found on islands off the coast of western Australia, and Rottnest Island in particular.

Found the next best thing to a cloud. ☁️ This is Poppy, one of 5 clouds as part of the family @miss_poppet_the_samoyed  A little life update, I’m going to Bali for a few weeks as it’s time to throw myself into the deep end and focus on some wildlife projects. Where in Indonesia should I goto? Wanna meetup? See you soon   #animalselfie #samoyedpuppy #samoyed #DaxonsAnimalSelfies #dogsofinstagram #dogs #instadoggo #doggo #dogselfie #dogs_of_instagram #melbourne #australia #bali

Ducking and diving 閭This girl coaching me on swimming. Such a magical moment Currently down in Okinawa to take some time out and plan for the next few months. Follow along on my YouTube channel for a behind the scenes of Mr Duck coming soon  link in bio. #DaxonsAnimalSelfies #snorkeling #animalselfie #duck #ducks #swimming #okinawa #japan

Behind the camera is an ice cream Such a funny time hanging out with the giraffes. Thanks @visitsunshinecoast for helping me out with this experience.  @australiazoo. PS, there was no ice cream just enthusiastic kisses. #DaxonsAnimalSelfies #australiazoo #VisitSunshineCoast

Let’s fill the world with unconditional love. If you’ve forgotten what it’s really like to feel that positive energy you’ll find it by helping the people that need it the most. 珞- #daxonsanimalselfies #animalselfie #selfie #animals #catselfie #catsofinstagram #catstagram #instacats #cats.

Get my good side  樂 The last few months have been a blast, it’s been go go go. But there’s no better feeling than your bed at home. I’m going to take a rest in Ireland with family for the next month and edit the hundreds of videos I was supposed to upload. Everyone needs a good recharge to blast through their next goals. Big surprises on the horizon!  The crazy snap is thanks to the BelarusFeed team. They organised a meet and greet with some local animals that seemed to love the camera. Cheers for the behind the scenes snaps @volha.shukaila!

It's elephant selfie time! For the next two weeks I'm here in Thailand with @loopabroad and their awesome crew helping elephants.  Most people can be apart of this program if you want to help. They're freaking adorable in person. #SaveTheEles #DaxonsAnimalSelfies

We need to talk, you haven't showered in awhile.  Proboscis Monkey's goal in life is grow a big nose. In this case the bigger the better to attract the females to mate. They're an endangered species and under threat of deforestation for palm oil plantations. Luckily this gang have been saved with an open jungle sanctuary. Free to explore and survive in the wild. @sabahtourism #sabahtourism

I love you this much 珞#DaxonsAnimalSelfies

Started from the bottom now we’re deer! 歷 Going to Thailand next week to the Elephant Nature Park in Chiang Mai. All with the aim to help create stories about their dog rescue mission. Expect way more updates going forward as I had such a busy schedule the last few days. Miss you crew #deers #deerpark #naradeerpark #naradeer #japan #kyoto #osaka #animalselfie #DaxonsAnimalSelfies

Do you have a good animal selfie? Share in the comments!