Two-thirds of Irish pubs could close permanently because of COVID

Most Irish pubs have been closed since mid-March. 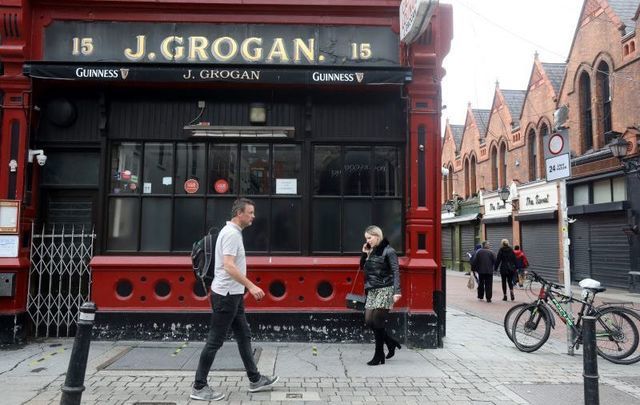 Grogan's pub in Dublin, one of thousands of Irish pubs forced to remain closed during the pandemic. Rolling News

A group representing pubs in Ireland has warned that two-thirds of Irish bars face permanent closure by Christmas amid continued uncertainty during the coronavirus pandemic.

The Vintner Federation of Ireland (VFI) has claimed that the continued forced closure of more than 60% of Irish pubs during the pandemic has completely damaged the industry, with thousands of pubs on the edge of permanent closure.

The VFI also condemned the Irish Government's support package for pubs forced to close during the pandemic, describing it as "inadeqaute" and claimed that it could lead to two-thirds of Irish pubs shutting their doors for good before Christmas.

The Irish Government recently announced a €16 million support package for pubs around the country to compensate for delaying the reopening of pubs for the third time.

All pubs were initially slated to reopen on July 20 as part of the Government's roadmap to COVID-19 recovery. However, most pubs have still not reopened due to a spike in coronavirus cases and will be closed until mid-September at the very least.

Tanáiste Leo Varadkar has hinted that "wet pubs", which only serve alcohol, may not reopen again this year.

In total, there are around 3,500 pubs in Ireland that only serve alcohol and the VFI reacted furiously to the support package.

"This so-called support package for publicans who are closed almost six months is woefully inadequate. Our members are facing into an autumn of uncertainty with no guidance from Government about how and when they will be allowed reopen," Cribben said.

He said that publicans were in "complete despair" and claimed that they "couldn't see any light at the end of the tunnel."

Donall O’Keeffe, Chief Executive of the LVA, criticized the Government, arguing that they had plenty of time to put a satisfactory package together.

"We asked for Support, Not Sympathy and the Government has given us crumbs," O'Keeffe said.

"This is the third time the reopening of the pubs has been delayed and they have had weeks to put a package together."

Irish pubs have now endured the longest lockdown in the European Union, with pubs in every other member state permitted to open in some form.