A year in Dublin tech 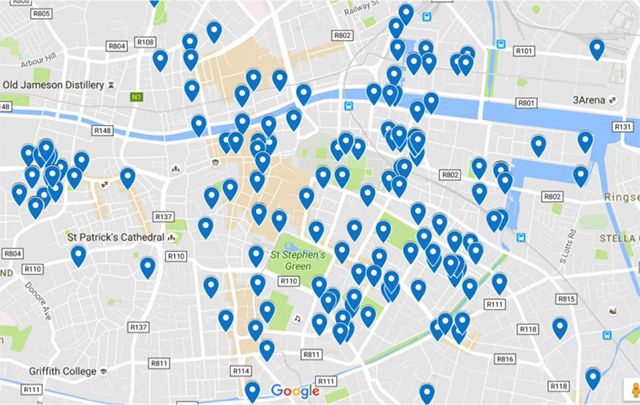 “It’s been a quiet year” quipped IDA Chief Martin Shanahan at an event earlier in December.

As we all know, 2016 was a loud, noisy and unpredictable year, but while uncertainty worldwide and regarding Brexit impacts Ireland, our economic picture remains strong with the ESRI forecasting GDP growth in 2017 of 3.5%.

The mood remains confident in Dublin’s tech and startup sector too. 2016 was a good year and in some ways a breakout one, with strong numbers and an ecosystem that’s maturing in many tangible ways. Let’s start with some baseline numbers:

According to TechIreland, there are 775 Irish startups with headquarters in Dublin. There are also 230 global tech multinationals, 23% of whom are building products from Dublin. Dublin has over 50 startup hubs from incubators and coworking spaces to accelerators and research centers. We have 3 universities and an estimated 3,000 computer science graduates every year.

Dublin city center is dense with startups as the TechIreland map above illustrates.

By the end of September 2016, funding in Ireland already totaled €734m compared to €522m for the whole of 2015, but as Draper Esprit VC Brian Caulfield cautions, the devil is in the detail:

"The increase in 2015 (about 30% over 2014) was characterized by some very large raises by digital technology companies such as Swrve, Intercom, Clavis, Movidius, and AMCS. In 2016 there was a big increase in funds raised by health sciences companies, from just 28% of the total in 2015 to 54% of the total in the first three-quarters of 2016. The amount raised by digital technology companies may still be up somewhat year-on-year but 2016 will not show a huge increase over 2015" – Brian Caulfield

The below table provides further details on where big chunks of money were invested in 2016.

There were also many small but “notable” fundraises in 2016 and we’ve featured a sample of these below. They’re notable because of the new investors they’re bringing to Ireland and/or because of the exciting tech the companies are developing from here:

According to John Phelan at Halo Business Angel Network, angel investments across Ireland in 2016 will be close to €13M compared to €10.8m in 2015. The number of active angels also increased this year by 15%. These numbers are trending in the right direction, but given angel funding’s importance to the overall health of the ecosystem, there’s still lots of work to be done. John aims to hit €20M by 2020.

What about Female Founder Funding? Enterprise Ireland is one of the most active female funders in Europe, funding 45 female-led companies in 2014 and a total of 61 in 2015. Sarita Johnston from EI says that the number for 2016 may be higher again, but we’ll have to wait till early next year to learn more.

"We’re moving from a very loose, incohesive ecosystem here in Dublin to one that has shape, form, and structure. It’s important to continue to develop that cohesion and make Dublin as productive as possible in terms of creating value" – Johnny Walker, Health Founders

But the fact that great Irish companies like Brite:Bill and Datahug are still exiting at a relatively early stage shows that our ecosystem needs to mature further to fully support scaling companies.

Ronan Perceval, CEO of Phorest, sees Dublin’s maturing in 2016 in terms of an uptick in skillsets and ambition:

"We’re starting to see some internet companies like Intercom and CurrencyFair scale rapidly from right here in Dublin. That means there is a growing group of people leveling up and learning the skills of how to scale. Those skills will compound in more and more successful companies as they are passed on" – Ronan Perceval

And Conor Stanley of Tribal VC sees Dublin’s maturation as part of a trend across Europe, one we’re in a good position to capitalize on:

"We’re seeing more and more companies scaling successfully in Ireland, rather than just starting here. We’re also seeing more venture capital coming in from overseas. The other dynamic is that Europe is now pretty hot on tech, with a multitude of advanced ecosystems developing. You’re seeing the flow of capital around Europe, with European investors working together. Dublin’s quite advanced and can be a real piece of that cog" – Conor Stanley

Some of the most exciting companies building product in Dublin today are run by international founders who came here to work for multinationals and have since moved to the startup world. Companies like Cesanta, Profitero and Leapchat. Dublin Globe has published a number of articles on these new Dublin startups, the most recent one in December.

Barcelona is known for IOT and mobile, Helsinki for gaming, Berlin for consumer internet. Dublin, and Ireland by extension has always been known as a center for B2B enterprise tech but in 2016 we started to talk with more specificity about our leadership positions in areas like TravelTech. As Mark Lenahan of CJ Ignition confirms:

"It has been an interesting year for the 60+ tech companies in Ireland that support the travel industry. RetailInMotion, Fleetmatics, OpenJaw and Arconics were acquired, while Boxeverand Roomex received significant funding rounds. Dublin hosted important industry events like PhoCusWright, IATA and CAPA and Ryanair Labs grew to 150 people as they work on turning the company into an Amazon-like travel retailer" – Mark Lenahan

A listing of 60+ traveltech companies was published earlier this year on Dublin Globe. It was updated in Q3 and will be updated again shortly as this dynamic sector continues to develop and expand. This listicle is one of the most popular in Dublin Globe’s history.

Dublin is well known as a fintech center, and developments in 2016, including Brexit, kept us firmly on the radar as the number 2 location in Europe after London. In 2016, Deloitte chose Dublin for their EMEA blockchain lab, where fifty blockchain developers and designers will complement an emerging indigenous cluster of companies like Coinprism and Signatur. Dave Anderson’s map of 111 Irish Fintech companies was also published this year, and by Q3, €101 million was raised by twelve companies in areas from payments and currency exchange to savings and online authentication.

In 2016, Dublin also burnished its reputation as Europe’s capital of SaaS by hosting Europe’s first ever SaaS conference SaaStock in September. Our SaaS chops are unique and impressive, from the global SaaS companies who call Dublin their EMEA home to Irish success stories like Teamwork, Intercom, and Boxever whose playbooks will be the bibles for growth for the next generation. Some of our most internationally active VCs like Draper Esprit, Tribal, and Frontline are also focused on SaaS. As Fergus Gloster explained it at the Newstalk SaaS Bootcamp:

"The more people there are in Dublin who understand how to build a SaaS company, make it scalable and make it outrageously valuable for all stakeholders, the better for the Irish economy moving forward" – Fergus Gloster

2016 also exposed the full breadth and depth of “deep tech” in Dublin and Dublin Globe covered these developments extensively with articles and listicles on Machine Learning, AR/VR and Blockchain.

AI, Machine Learning and NPL (natural language processing) meetups all started in Dublin in 2016 and have become some of the most popular – and most crowded – in the city.

Two other breakout sectors in Dublin in 2016 were Digital Health and Drones.

In 2016, we continued to attract the world’s best tech companies to Dublin, and they continued to bring their R&D centers and innovation labs with them. Being an international location of choice for data scientists and engineers means more welcome diversity to Dublin’s tech scene. It also means that the competition on the ground for engineering and other key talent has never been fiercer. New multinational developments in 2016 include:

At best, 2016 was an uneventful year for tech and entrepreneur related policy in Ireland. Elaine Coughlan, of Atlantic Bridge Capital, defined the tech sector’s challenge with government in broad terms:

"There is low awareness among the government and civil servants about what is now required in a very competitive global world to fund, grow and scale Irish tech businesses globally. We need policies that support international irish companies growth, and a taxation structure that facilitates the flow of capital from multiple sources – repeat entrepreneurs and EIIS investment along the lines of the UK offering, enabling Angels, VCs, Growth and Mezz funds who are all taking high risk to fund Irish companies to become global companies" – Elaine Coughlan

John Murphy of PWC who has worked closely with us on policy submissions during the year adds:

"Some incremental progress has been made in the budget on the capital gains tax front for entrepreneurs but the progress really just highlights the issues rather than addressing them fully. Raising funding and rewarding entrepreneurs remains a challenge in Ireland from a tax perspective" – John Murphy

Possibly the biggest frustration of the 2017 Budget, announced in October, was the government’s refusal to solve, or even acknowledge, how difficult it is for startups to use current share options policy as a key talent acquisition tool. Claire McHugh, the CEO of startup Axonista called the current policy a “dark art” and it seems set to remain so for months – if not years – to come.

So what up for 2017? Here’s the beginnings of a Wishlist

"It is widely accepted that Ireland’s greatest natural resources are our people, our heritage in the arts and our commitment to education, all of which feed into a culture of imaginative, resilient connectors" – Julie Spillane

Here Julie Spillane, Director of The Dock, Accenture’s new global center for innovation sums up Ireland’s enduring strengths and sets the tone for a great year for Dublin tech in 2017.

Happy Christmas everyone and see you soon in 2017.

This article appears courtesy of the Dublin Globe. For more stories on Dublin's tech industry and startup ecosystem, visit their website.