The Irish economy is now officially in recession after GDP contracted in successive quarters. 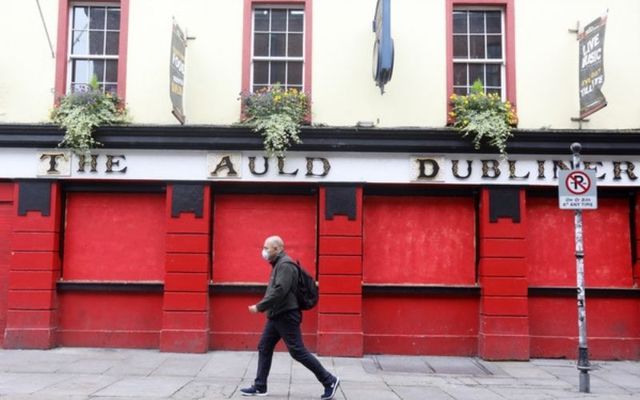 The Irish economy contracted by 6.1% in the second quarter of 2020, the largest quarterly drop ever recorded in Irish history.

The figures, compiled by the Central Statistics Office (CSO), show that Gross Domestic Product (GDP) shrunk by 6.1% between April and June due to the impact of the COVID-19 pandemic, meaning that the Irish economy is now in recession.

A recession is defined by a drop in GDP for two quarters in-a-row. Figures released earlier this year found that the Irish economy also contracted during the first quarter of 2020.

Ireland's Gross National Product (GNP), which excludes the profits of multinational companies based in Ireland, fell even more dramatically than its GDP.

A number of different economic sectors contracted significantly in Ireland in the three-month period.

The construction sector, for instance, dropped by 38.3% as virtually all building work ground to a halt, while the sector encompassing the distribution, transport, hotel, and restaurant industries fell by 30.3% due to COVID-19 restrictions.

The arts and entertainment sector took the worst hit, contracting by a staggering 65.5% in Q2 of 2020, while the Agriculture, Forestry and Fishing sector also fell by 60.6%.

Industry and Government spending were the only sectors that continued to grow in the volatile three-month period.

Personal spending on services and goods, an indicator of a healthy economy, contracted by a significant 19.6% in the same period.

Paschal Donohoe, Ireland's Minister for Finance, said that the second-quarter decline of 6.1% represents the biggest quarterly decline in GDP ever recorded.

He also stressed that the Irish economy had not suffered as badly as its European or American counterparts.

"The hit was not as severe as many of our trading partners, for instance, the UK, eurozone and the US where GDP declined by over 20, 12 and 9% respectively in the same period," Donohoe said at the launch of Ireland's Credit Guarantee Scheme on Monday.

He also said that the figures were not unexpected since a large number of businesses closed down in Q2 to comply with the Irish Government's lockdown.

Donohoe said that there are already signs that the economy has begun to pick up in Q3 of 2020 after Ireland reopened from COVID-19 lockdown.

He said the Government was now preparing the Budget for 2021 and a National Economic Plan to help the country recover from the recession.

The €2 billion Credit Guarantee Scheme, which Donohoe launched on Monday, will provide Irish businesses with access to low-cost loans and is the largest-ever state-back loan guarantee in Irish history.