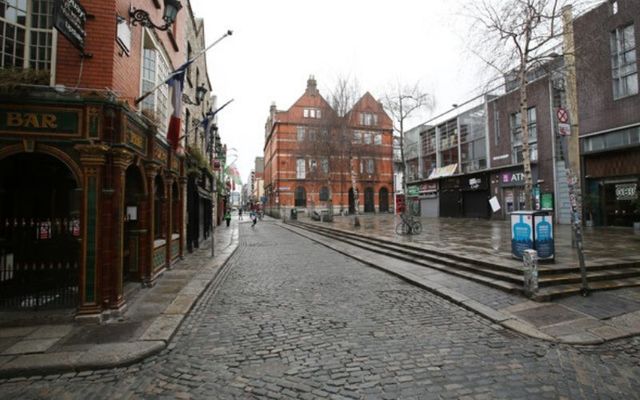 The Irish economy has been ravaged by COVID-19. Rolling News

The Irish Central Bank has warned that the Irish economy could shrink by 25% by the end of the year due to the COVID-19 crisis.

The Central Bank said that the virus has already "triggered an extremely severe economic shock" and said that it is unlike anything the Irish economy has ever seen before.

The bank said that a global health crisis was fast becoming a global economic crisis.

The Irish GDP could fall by 8.3% this year and unemployment in the country could rise to 25%, according to a quarterly bulletin published by the Central Bank.

It added that the economy could collapse by 25% in the next three months.

The bank is predicting that as many as 500,000 people will lose their jobs during the COVID-19 crisis and, while it expects the employment sector to recover somewhat before the end of the year, it still forecasts that unemployment will be above 10% in Ireland at the turn of the year.

320,000 people have already been made redundant due to COVID-19, according to Mark Cassidy, Director of Economics at the Central Bank.

The job losses will be concentrated in the hospitality, tourism, recreation, retail and construction sectors, according to Cassidy.

The bank is also predicting a €19.6 billion ($21 billion) deficit in public finances for the year. It had previously forecast that Ireland would have a €2.2 billion ($2.4 billion) surplus before Coronavirus hit Irish shores.

Additionally, the Central Bank says that 16,000 new houses will be built in Ireland in 2020 after initially forecasting that 26,000 houses would be built.

Paschal Donohue, Ireland's acting Minister for Finance, said that Ireland would have to rebuild a new economy in the wake of the COVID-19 crisis but said that jobs and incomes can be recovered.

Donohue said that Ireland's credit was good and also emphasized that the Central Bank predictions are only "possible scenarios."

He described the scheme as "unprecedented" and said that it was  the "first step in laying our foundation for recovery."

He appealed to companies to take advantage of the scheme to keep their employees on their payrolls.

Otherwise, people made redundant from the COVID-19 pandemic can collect a €350 social welfare payment every week.

Donohue said that the Irish Government may have to add further support to businesses in the coming weeks.

Read more: "It can be beat" - Elderly Irish man inspires others after coronavirus battle