Tough times and hard decision for Ireland’s economy during COVID

How are we going to pay for the cost of Covid-19 and the devastation it is wreaking on the Irish economy? 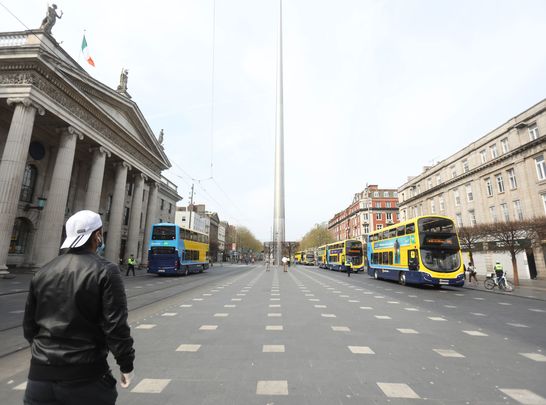 Empty O'Connell Street, in Dublin, during the COVID-19 lockdown.

How are we going to pay for the cost of Covid-19 and the devastation it is wreaking on the Irish economy?

We are still in the middle of battling the pandemic, of course, and all our attention at the moment is focused on preventing the virus from getting out of control here.  That battle is being fought regardless of cost -- and rightly so -- but the cost is already enormous as is the economic damage being caused by the lockdown.

The government has done its best to cushion the effect with generous support for the one million who are now out of work.  For that reason, the depth of the crisis has yet to register with many people here.

But the unprecedented scale of what is happening has economists here deeply worried. And last week some were starting to question just how long the state can maintain the present level of support and how deep the long-term damage to the economy will be.

The speed of this has been terrifying.  Just weeks ago when all this began -- the first case here was at the end of February --  we were close to full employment.

Now we have just over a million people on state support of some kind.  Single people who have lost their jobs claim the pandemic unemployment payment of €350 ($390) a week which is not means-tested.  Those with a family claim welfare payments, which exceed the €350.

Businesses that are closed but keep on their employees get up to 70 percent of the wages bill, the aim being to keep them functioning until the crisis is over.  And there are other supports to help businesses with cash flow and so on.

The cost of all this, as we said, is enormous.

The support schemes were introduced in mid-March for 12 weeks.  Last week the Minister for Finance Paschal Donohoe warned that if the situation has not improved by then the supports will have to be reviewed and may have to be modified.

This is no surprise because we simply could not afford to continue support at that level.  The generosity of what has been done is illustrated by the fact that the half a million people who are getting the €350 a week pandemic payment are substantially better off than they would be in normal times if they had lost their jobs and were on the €203 jobseekers (welfare) payment.   Plus it's not means-tested, so even if they could use their own money to keep going they don't have to.

Estimates of how much all this will cost the state this year are in the €20 billion to €30 billion range.  The annual budget is now over €80 billion a year in revenue and we spend almost every euro of it.

In fact, we were still running a deficit in recent years in spite of the recovery and have barely managed to balance revenue and spending in the last two budgets.  So the money to pay the enormous cost of Covid-19 here will have to be borrowed.

Unfortunately, the tale of economic woe does not stop there.  The big problem is that we don't know how long this crisis will last and how much of our economy will be lost when it is over.

Unemployment is forecast to hit 22 percent by the end of June and it could stick there, much higher than the 18 percent it reached after the crash a decade ago.  That saw mass emigration at the time, but with the U.K. and the U.S. now in deep trouble as well that way out will not be available to us this time.

So what will we do?  Negotiations are continuing here to try to form a new government.  The two big parties, Fianna Fail and Fine Gael, have said they will not repeat the austerity era we had after the crash and have promised not to increase taxes or cut welfare payments.

But the truth is, this will be impossible given the situation we now face with tax revenue collapsing due to the lockdown and state spending soaring to ease the impact on the population.

The smaller parties and independents are all demanding massive increases in state spending, in housing and other areas, as is Sinn Fein who Fianna Fail and Fine Gael have ruled out of the coalition they are trying to form for reasons we all know about.

The most likely group to form a government with Fianna Fail and Fine Gael is the Green Party, which last week produced a long list of demands which may be laudable for climate change reasons but could end up costing the state billions.  What all of this shows is that our politicians are still in some kind of fantasy land where there are forests of money trees.

The reality is going to be painful for them and for us. The idea that we can borrow vast amounts of money because interest rates are low is misplaced.

If the markets decide we are in over our heads, that could change rapidly.  You will remember that it was because the markets would only buy our state bonds at impossible rates that caused the bust here a decade ago and left us needing a bailout from the IMF.

Yet Sinn Fein, the Greens, and the smaller parties and independents still don't get a new reality.  The election early in February, before the Covid crisis began to emerge here, was all about making promises of massive spending on housing, health, and other things in the so-called "change agenda.”

Much of that will now have to wait because we won't have the money.  This battle is about survival, not spending.

Much of the present caretaker government's predictions are based on a 12-week shutdown until mid-June, followed by an orderly reopening of the economy and a quick recovery.   Even that is forecast to cost €20 billion and to cut GDP by 10 percent.

But if much of the shutdown has to continue until later in the year with only a partial reopening of the economy the hit will be €30 billion and GDP will fall by 15 percent.  We would then be deep into a recession that could drag on into next year or even longer.

The coming recession will be global, of course, and with so many jobs here dependent on exports we are particularly vulnerable.  The big companies here should be able to cope, although even they are feeling the pressure because of the shutdown and the collapse of international markets.

But over half of the workforce here is in small and medium-sized companies, and many of them will struggle to survive if this drags on longer than expected.  Already an alarming number of them, particularly in the hospitality sector, are saying they are in trouble and won't be opening again.

The impact on tourism will be huge and could last for several years, with only a very slow recovery in the number of visitors coming here. Many hotels, bars, and restaurants may not survive even this year.  Even when they are open again, social distancing rules will make it difficult for many of them to be profitable.

The agri-food sector, a huge part of our export economy, is also facing tough times.  Of course, people still have to eat, but it's not as simple as that.  We supply the beef for many of the burgers eaten in Europe, for example, but with restaurants closed that trade has collapsed.  And it's the same in other parts of the food industry, as markets are disrupted.

All this means that Ireland has a very difficult time ahead.  It's going to be a thankless task for whoever makes up the next government, as Taoiseach Leo Varadkar admitted last week.  He said it will require a huge effort, a great deal of disappointment, and a lot of criticism as a consequence.

Everyone will be looking for a less painful way out when none exists.  Even if the EU steps in with coronabonds or some other way of spreading the cost, every country will be in difficulty.

Our ability to survive this will depend very much on ourselves.  To continue to support the most vulnerable in our society, the next government will have to take some very unpopular decisions.

It's going to have to restrict support to those who really need it and reduce payments to levels that match other countries in Europe and will be sustainable.  It will have to implement painful ways of raising revenue, like a comprehensive array of wealth taxes.

An example of what could happen is what was done the last time after the crash a decade ago. Back then the government raided the private pension savings of people, many of them self-employed, who thought they were doing the right thing by planning for their old age.  A pension savings levy was applied each year from 2011 to 2104 which cost thousands to most individuals.

That might well be done again.  Or the government might apply a progressive levy to cash balances in bank accounts above a threshold of, say, €10,000.

So people who have been saving in recent years and have built up a nest egg in their banks could find the government dipping in to take a chunk. And of course the property tax and asset tax structures could be expanded to catch more of the wealth individuals might have.

It won't be pretty and it won't be popular.  But when the new government is formed, tough decisions like this will have to be taken over the coming years.

That's one of the reasons it is now taking the parties so long to form a new coalition.   It will be a thankless time to be in government.