June conference has been the launch pad for some of the most ambitious projects connecting the US and Northern Ireland. 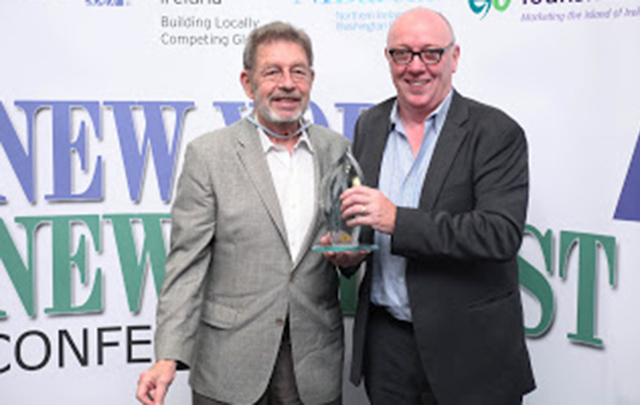 Civic leaders from New York and Belfast will gather in the Big Apple next month at an annual conference hailed for transforming transatlantic relations, the New York-New Belfast conference.

As the premier annual meeting place of influencers from both cities, the New York-New Belfast conference has earned a reputation as the launch pad for some of the most ambitious projects connecting the US and Northern Ireland.

That’s the view of Oscar-winning director Terry George who has spoken at the conference several times since its inception in 2010.

“The New York - New Belfast conference has been the single most important event for establishing business contacts and fixing the idea of Belfast as a vital trading partner and friend to Wall Street, Broadway and the multitude of ethnicities that make up the world’s most vital city,” said the Director of newly-released epic The Promise. “If you want to make it here in the Big Apple, then it’s New York-New Belfast for you.”

That’s a view echoed by prominent Irish American and Belfast native Shaun Kelly who is Global Chief Operating Officer of KPMG International — premier business partner of the conference which runs on 15-16 June.

"KPMG is thrilled to support this gathering of dynamic bridge-builders from New York and Belfast who are leading ambitious regeneration projects in both cities,” he told IrishCentral.

"As lead business supporter of this groundbreaking transatlantic initiative, KPMG has been delighted to see lasting, mutually beneficial alliances in the fields of sport, culture and commerce emerge from contacts and friendships forged at this annual conference."

New York State Comptroller Tom DiNapoli addressing the 2015 New York-New Belfast Conference shortly after he had made a fact-finding visit to Belfast.

A Belfast delegation of prominent community, cultural and business figures, led by the city’s Lord Mayor, will meet with their New York counterparts during the conference to discuss how they can work together.

The event will open with a welcome reception for delegates at the American Irish Historical Society on Fifth Avenue on the evening of Thursday, 15 June and move the following day to Pier A, Harbor House, at the tip of Manhattan, where discussions on a range of issues, including tourism development and Brexit will take place.

Conference Director Connla McCann says she is looking forward to “spirited debate to reflect this era of turbulence and opportunity.”

“It’s true that Brexit has cast a cloud of uncertainty over the future course of the US-Ireland relationship but it’s also a fact that there has been a surge of capital investment in Belfast most notably in terms of a new $300m university campus in the city centre and the plans for 13 new hotels. New York-New Belfast gives us a chance to assess progress and plan for the future.”

Harry Connolly, director of leading Belfast tourism body Fáilte Feirste Thiar (West Belfast Tourism Agency) has been represented at New York-New Belfast for several years and will be setting out his stall again next month.

"New York-New Belfast provides an unrivalled platform to showcase our local tourism offering, to engage with policy makers, to lobby for investment and to gain real traction in a critical market for Irish tourism,” he said. “The conference has provided us with the confidence to be bold, creative and ambitious in our approach to the US market and each year we continue to see partnerships flourish and relationships develop."

This year, Connolly will join forces with TWU International President John Samuelson to unveil a unique transatlantic partnership with US labor to create a new James Connolly Interpretative Center on the Falls Road in West Belfast where the 1916 Rising leader once lived.

Further information on this year’s event, running from June 15 to 16, can be found online or by contacting Connla McCann, at c.mcann@aisling-events.com.