Meet the Irish artists blazing a trail in Brooklyn

Ireland’s expats contributing to the cultural and literary landscape of New York City. 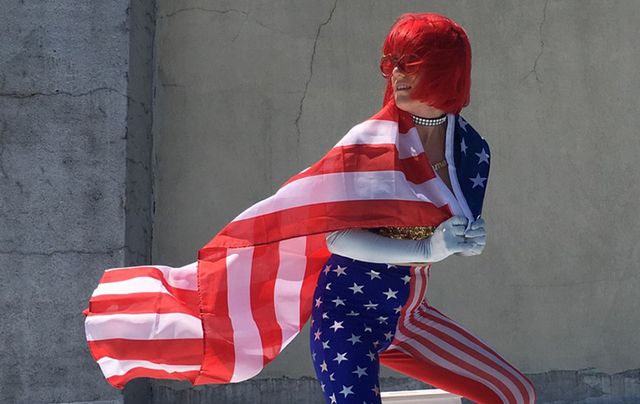 The Scarlet Bob! A style activist in Brooklyn who hails from Cavan. @thescarletbob / Instagram, taken by @corbinchase

The Irish have contributed to the cultural and literary landscape of New York City for generations. Our heritage and culture are deeply woven into the city’s identity and our impact on the architecture, music and in hospitality has been well-documented.

For generations, we have been found on construction sites, in political circles and behind the bar in the city’s favorite pubs. Beyond the stereotype, there’s a new stream of creative immigrants arriving today and making their mark on the city’s aesthetic at open-mics, on catwalks and across Brooklyn art galleries and walls.

Although getting a visa to work in the U.S. has become significantly tougher for young Irish people, there is, still, a wave of trail-blazers making their way to the cultural capital of the world, to write, create and get inspiration. The well-documented exodus of artists from Manhattan to the boroughs has carried the latest Irish incumbents along with it. Brooklyn, particularly Bushwick, has become a hub for Irish talent.

I had the pleasure of spending some time in the neighborhood, meeting up with fellow expats pushing the boundaries of the Brooklyn art scene.

Dubliner Annelise Berghenti studied English at Trinity but had always wanted to live in New York. Before making the move, Berghenti’s work was published in the Banshee Irish Literary Journal in Ireland.

Once in NYC, the writer settled on an MFA in poetry at Columbia University in Manhattan, a two-year program.

Working and living in the city helped Annelise to “read more diversely,” and “reading people who have very different life experiences; going to hear them speak and read their work” is important to her.

Currently working on her thesis, it’s a collection of her poetry that should provide the basis for a book, she says. It’s the “skeleton of a book” but the intent is to publish a book of works soon.

Hailing from Sligo, Connie Bree lives and works in Brooklyn where she runs her own company providing project management for artists and arts organizations.

Having worked as a graphic designer, then an arts festival programmer and art curator in Belfast, Bree first came to New York with renowned illustrator Oliver Jeffers to help him set up his presence here. Once that project was finished, the engaging producer utilized her unique set of skills – a design background, fine art knowledge and productions experience – to set up her own business, The Connie Bree Machine. She facilitates the work of artists, creatives and film-makers from the U.S. and around the world but remains a contact point for many Irish who want to take their work across the Atlantic.  “I’ve had a lot of artists contact me from home who are coming here. People who want to come here, to do a residency or a month and don’t know how to maneuver around the city and get contacts. I’ve noticed more people who are coming here and trying to get set up.”

Bree is happy to help and is generous with her time, insisting it’s the nature of the creative community. “The intention was to be an Irish artist in New York who can assist Irish people who are coming here. That’s something I really wanted to do.”

Gemma Sherlock aka The Scarlet Bob - Style Activist. (Via: @anthonylycettphotography for @self.styled swag is @sophiecochevelou)

Gemma Sherlock, aka The Scarlet Bob, arrived in New York to “save the world from boring fashion.”

Her fearless style has garnered the Cavan native a loyal Instagram following and her ethos is “fundamentally about self-acceptance.”

From styling high-fashion editorial shoots to blogging about life in Bushwick, the Scarlet Bob says her alter ego is all about “letting people know it’s OK to be different.”

Gemma moved to the city in 2015, leaving behind an advertising career in Dublin, and that’s when her personal style really evolved, she says. She became tired of seeing the same minimal images on fashion sites and Instagram pages and The Scarlet Bob was born.

Is it easier to express yourself creatively in NYC? “People are very supportive of it (fashion) as an art, the nurturing of art. That sounds so New York,” she roars laughing…

The Scarlet Bob settled in Bushwick because “it’s where all the creative people are” and where the you are exposed to new “people who are willing to collaborate and try out new things.”

Sinéad Lawlor left Ireland ten years ago. The Dubliner spent some time working with Marks and Spencer in Istanbul before doing a Masters at The Parsons School of Design in New York.  In her role as head designer with sustainable women’s brand ÖHLIN/D, Sinéad gets to work on her passion – conscious manufacturing.

The designer puts great importance on knowing the factories they work with (a lot of which are run by women) as well as only working with sustainable fabric, yarn and denim washed with recycled water.

Although settled in Bedford–Stuyvesant neighborhood of Brooklyn, the 33-year old manages to get home to Ireland often, thanks to working with a linen company in Wexford and frequent travel to Italy.

“It worked out that a lot of my friends are Irish and in the creative scene.” As with many fellow ex-pats, Sinéad gets contacted a lot by other Irish people trying to navigate the tricky New York landscape.  “You’re happy to help each other out because you know how hard it is.”

New Yorkers will recognize Solus’ work from around the city, particularly his giant Joey Ramone mural on the corner of Bleecker Street and The Bowery. The Dublin artist splits his time between home and NYC. During his first visit in 2012, the creative connected with local artists and new friends though social media and painted his first mural on a Brooklyn rooftop. Since then he’s been back frequently for chunks of time and is considering relocating to New York full-time.

He’s currently working on a piece in Bushwick and considering a spot in the Bronx. “Street art is very temporary, a month later it could be gone.” Solus has been lucky in terms of New York longevity; his work has lasted over a year in some places, but he’s aware of the fluid nature of the business. “It’s hard to find wall space in such a big city with so many artists, you have to share the space.”

He enjoys splitting his time between the established street art scene in Brooklyn and the burgeoning movement in Dublin. Is it easier to create street art in New York? He mulls this for a moment “It’s becoming more accepted at home as well,” he admits.