Ireland faces its worst recession in history due to COVID-19

COVID-19 in Ireland could produce one of three scenarios, a report from ESRI says, and all three will result in the country's worst-ever recession. 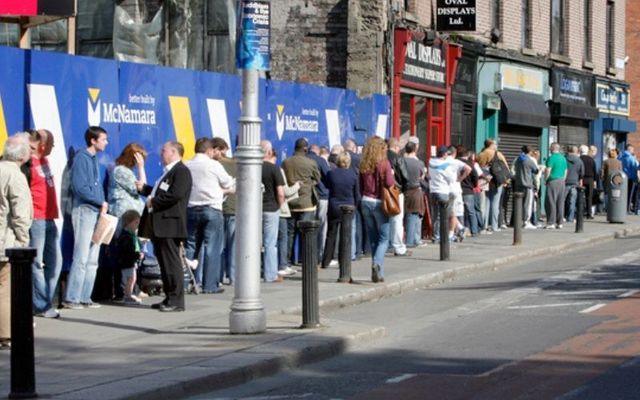 A large queue for social welfare payments in Dublin during Ireland's last recession in 2011. Rolling News

Ireland faces its worst recession and annual decline in history in the aftermath of the COVID-19 pandemic, according to a report by the Economic and Social Research Institute (ESRI).

The report found that Ireland is facing into one of three scenarios following COVID-19 lockdown and that all scenarios will result in the worst economic recession ever witnessed on Irish shores.

The ESRI, which conducts research to inform government policy and support a healthy economy released its Quarterly Economic Commentary on Thursday, May 28, as Ireland continues to steadily move out of COVID-19 lockdown.

The institute used three different scenarios to forecast Ireland's economic recovery from the pandemic with GDP falling by at least 8.6% and falling by 17.1% in the worst-case scenario.

The Benign scenario is based on successful disease suppression by the end of Q3 and a return to economic normality during the last quarter of the year.

The Severe scenario assumes that there will be a second wave of the virus later in the year and a return to strict lockdown measures during Q4.

The Baseline Scenario, meanwhile, is the "normal" scenario and is somewhere in the middle of the two extreme scenarios. The Baseline Scenario assumes that there will be at least some physical distancing and containment measures will still be in place in Q4.

The worst-case scenario, on the other hand, forecasts that Ireland's investment will shrink by 38% in 2020 and consumption will fall by 20%.

The best-case scenario predicts an 18% fall in investment and a 12% decline in consumer spending.

The Baseline Scenario also predicts that unemployment in Ireland in 2020 will average 17.4%.

Unemployment reached a record high of 28% in April with young workers living outside Dublin most heavily impacted.

The Benign and Severe scenarios are forecasting 15% and 19% unemployment respectively.

The government deficit in 2020 is expected to be over €27 billion under the Baseline Scenario.

The ESRI is urging the incoming Irish Government to stimulate the economy by investing in social housing and retrofitting homes to help Ireland reach its climate goals.

The report points to the lack of social housing in Ireland, particularly in Dublin, and argues that the response to the incoming recession would be a good time to catch up on the demand for housing.

Kieran McQuinn, one of the report's authors, also warned against implementing severe austerity measures like the response to the 2008 economic crash.

He argued that introducing harsh measures on taxpayers would compound the dire financial situation. He said that imposing severe fiscal adjustments (austerity) straight away would deter consumer spending and actually prolong Ireland's recovery.

“If you start to enforce the fiscal adjustments too soon that will compound the shock and compound the downturn in the overall economic activity which, ironically, will mean you need a larger adjustment over the longer term," he said at a press briefing on Thursday.

Furthermore, the ESRI's report found that household expenditure is set to decline at an unprecedented speed, significantly faster than the 2008 economic crash. However, the report also stated that extensive income supports distributed to households across the country has allowed people to save and may encourage spending when life returns to normal.