Can Biden save American democracy and can Ireland help?

"After four years of unprecedented assault, American Democracy is in tatters." 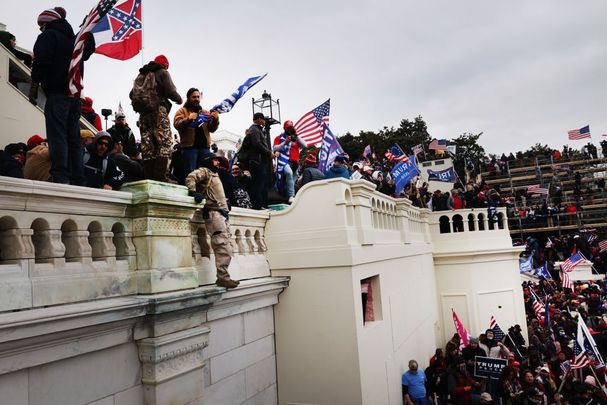 In the Christian calendar, Jan 6 is the feast of the Epiphany marking the visitation of the three wise men to the Christ child. On Jan 6 2021 Washington experienced a  visitation of a very different type. The visitors certainly weren’t wise, the star they followed was a perma-tanned reality television personality and they came bearing gifts of hatred, insurrection, and death.

The Democratic Party completely underestimated the power of social media and stood by helplessly as a barely literate, narcissistic, megalomaniac with questionable business acumen and ethics harnessed and controlled a mixture of vulnerable, desperate, gullible, and in some cases psychopathic individuals who in the death throes of his presidential term, obediently waited for the call to arms, as the Monopoly mogul played his last desperate ‘Get out of jail free card’ and mobilized his personal militia in an attempt to subvert the Democracy of a Nation.

After four years of unprecedented assault, American Democracy is in tatters; The basic tenets of Liberty, Equality, and Justice, shredded by a narcissistic nihilist abetted by a sinister cohort of amoral self-serving gombeen men; politicians, propagandists, and a murky media magnate and kingmaker Rupert Murdoch.

Complicit were the apolitical disseminators of the “alternative facts “ who stood by watching cynically from behind the veil of free speech – It took six days for Facebook, Instagram, and YouTube to block Trump's account following the deadly assault on the Capitol building! Twitter which hosted a  staggering 90 million followers, took two days!

It is a sad indictment on American democracy that again it took a catastrophe to bring down an incompetent Head of State. This time a Global epidemic, last time a tanking Global economy.

Against the background of almost half a million American lives lost to a virus that has spread like wildfire, fanned by the flames of ignorance and contempt, is a country awash with guns. America is experiencing the worst recorded increase in its national murder rate. Figures from the Council on Criminal Justice indicate “ The largest single-year increase in homicides ever reported in the US”. According to Small Arms Analytics which tracks industry sales an estimated 22.7 million firearms were sold in 2020! A record increase of 63%.  A simple equation is obvious -  More Guns = More Deaths!

It's not just the alarming amount of Americans on life support that is a cause of serious concern. Democracy itself is hanging grimly on to life!  The necessity for Americans to engage with politics has never been so vital. Education is key - citizens need to be actively encouraged to engage on a local level with their representatives.  more platforms and forums, via the media of radio and television, local and national should be established championing lively debate.

Ireland compared to the USA is a small homogeneous country, a fledgling Democracy with a reputation for exceptional literature and tolerance - Ireland was the first country to legalize same-sex marriage in 2015 and in 2017 elected an openly gay mixed race man as Tánaiste. (Prime Minister)

May 25 2018 was a turning point of such immense magnitude in Ireland. A referendum was held on the hugely contentious issue of abortion which resulted in a two to one majority for the Yes camp,  overturning a constitutional clause inserted in 1983 ‘Life from the moment of conception’. This was a truly remarkable result. Ireland was still largely a post agrarian country emerging from a theocracy where Priests issued edicts from the pulpits and literature was routinely censored. So how did the Irish shake off the iron grip of the Catholic church and throw a bucket of cold water over the seemingly inextricable bedfellows of state and religion?  Not to mention overcoming the pervasive overtures of the Big Tech Sirens?

Debate and discussion are essential in an open democracy and these hitherto forgotten basic tenets were meticulously observed during the referendum when the population was encouraged to participate at a local and national level through the medium of Radio, Television, and Newspapers.

The decision to call the referendum was based on the recommendations of a citizens assembly made up of 99 citizens and a Chairperson, who were randomly but selectively chosen to reflect a broad spectrum of age, gender, social class, and location. The Lorry drivers, Teachers, Students, Farmers, homemakers, etc who made up the Vox populi body were invited to attend seminars held by experts in ethics, law, and medicine and to listen to Women who shared their real life experiences of then very oppressive laws. A total of 17 various Lobby groups also made presentations.

“Whilst men are linked together, they easily and speedily communicate the alarm of any evil design. They are enabled to fathom it with common counsel, and to oppose it with united strength. Whereas, when they lie dispersed, without concert, order, or discipline, communication is uncertain, counsel difficult, and resistance impracticable. Where men are not acquainted with each other’s principles, nor experienced in each other’s talents, nor at all practised in their mutual habitudes and dispositions by joint efforts in business; no personal confidence, no friendship, no common interest, subsisting among them; it is evidently impossible that they can act a public part with uniformity, perseverance, or efficacy.”

The alarming decline of local Newspapers in the USA and the U.K. has led to a more centralized media which is inevitably less rigorous in news research and more sensationalist - the perfect breeding ground for fraudulent News.

Similar forces unleashed by the Brexit and Trump campaigns via social media and enabled by the tech giants failed to gain any traction in  Ireland resulting in a trouncing for the extremists.

This contrasts strikingly with the imploding democracies of the USA, UK, Hungary, and to a lesser degree  Poland where Personality strongman politics has proved so irresistible to a very large part of an undiscerning electorate where versions of fact are spewed out, controlled by the seductive algorithms of the tech industry and their bespoke versions of the truth, based on the political propensity of the user. Big Tech is too big and too influential. One of the most urgent priorities for the Biden Government should be to break up these oligarchies and apply fairer levels of taxation to the Billionaire Barons.

Let us sincerely hope that President Biden can rake over the dying embers of democracy and reignite the torch of liberty for a more enlightening epiphany!