Ireland's coastline is a wonder and the Causeway Coastal Route is the newest new wonder on the scene. 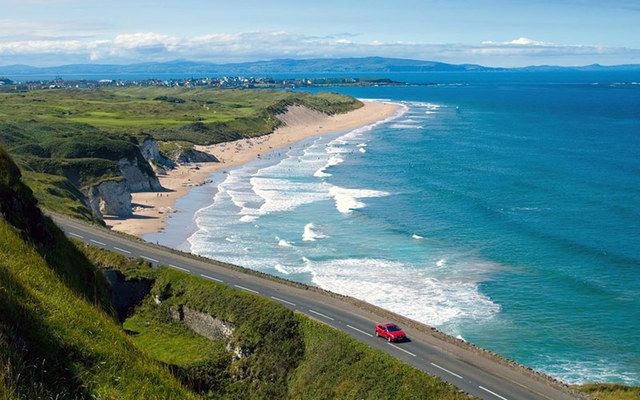 Back in early July, as some of the world’s best golfers battled for the Irish Open title in Portstewart, County Derry, one of the commentators drew a comparison with a faraway place.

At that moment a camera was focused on a tranquil, watery scene.

The sky overhead was blue, the sea but a darker reflection of it, and some folk were having a grand old time in a boat just offshore.

The commentator compared it with Pebble Beach in California.

This would have to be a compliment to most places on earth.

That said, the stretch of coastline on either side of Portstewart stands on its own merits.

And the same can be said for the coastline stretching further in either direction, to Belfast one way, Derry/Londonderry the other.

For this is the Causeway Coastal Route, an ancient rampart with a catchy new name.

Ireland’s coastline is a wonder.

Parts of it have been well known to visitors for years, most especially the Ring of Kerry and Dingle Peninsula.

In more recent times the Wild Atlantic Way has been presented to the wider world for what it truly is: wild, ocean-facing, and traversable.

Now the Causeway Coastal Route is being offered as an Irish journey between two cities, one that covers ancient ground by means of modern modes of transport.

It also covers more than one body of water.

Starting in Belfast, with its famous lough, the coastal route is lapped by the most northerly drops of the Irish Sea, the North Channel, one of the "Ocean’s Seven" bodies of water, the Sea of Moyle, a name drawn from the depths of Irish folklore, and, last but very much not least, the Atlantic Ocean.

By way of explanation, the Ocean's Seven consists of seven long-distance open-water swims and is the marathon swimming equivalent of the Seven Summits mountaineering challenge.

Suffice it to say, for the Causeway traveler the channel is generally better for gazing at than plunging into.

A car journey from Belfast to Derry/Londonderry along the Causeway Coastal Route would not take all that much time if you were concerned about time.

The idea, of course, is to take your time – to linger, to savor, to imbibe.

And no better place to start than in Belfast, a storied Victorian city full of old wonders and more recently minted ones based on old wonders such as can be found at the Titanic Center, not only now one of the most popular visitor attractions in all of Ireland, but hailed as the “World’s Leading Tourist Attraction” at the 2016 World Travel Awards.

Heading north from Belfast the idea is to follow a meandering route, one that takes you by way of the peninsula of Island Magee and its Gobbins Cliff Walk, to the town of Larne.

Regarded as the most dramatic cliff walk in the whole of Europe, the roughly 2-mile stretch of path starts off at the “Wise Eye”, named after Berkeley Dean Wise, the Irish railway engineer who masterminded the incredible tourist attraction hovering over the crashing waves of the North Channel. Here you get access to the most spectacular section of the original path, first constructed over 100 years ago, and from here you can take advantage of a fully-guided tour and hear the tales of local smugglers while enjoying the fresh feel of the Irish Sea wind.

Once you leave the cliff walk and make your way to Larne, proceed into the magical Glens of Antrim (take your time herein and step into Glenariff Forest Park, a nature reserve in the heart of the glens with three spectacular waterfalls and a choice of peaceful riverside walks) and then continue back to the coast and to some of the most picturesque villages and small towns on the entire island of Ireland.

These would include Glenarm, Carnlough, Cushendall and Cushendun, the last of these being the most northerly of the foursome.

From Cushendun it is possible to see Scotland on a clear day – this unless you find yourself in the Cushendun Caves, one of the many filming locations in this corner of Ireland for "Game of Thrones".

It is hereabouts that the traveler sets eyes on the Straits of Moyle, or Sea of Moyle, famed in Celtic mythology through the story of the Children of Lir.

This is the narrowest expanse of water in the North Channel between County Antrim and the Mull of Kintyre in Scotland.

The distance between Ireland and Scotland here is only about twelve miles. But twelve very challenging miles, even if you are up to Ocean’s Seven standards, so a nice paddle should be enough for the passer-by who has places to go and appointments to keep.

One such appointment would be a stop (albeit back down the road a wee bit, but this journey is all about meandering) at Glenarm Castle which has been home to the McDonnell family since the 1600s and is surrounded by gardens that are among the oldest in Ireland.

The Causeway Route begins to turn westward now, just to the south of Fair Head, but still to the north is Rathlin Island which is an offshore, and must-see, ingredient in the journey that is accessed by ferry.

Rathlin is a standout in more ways than one. Being an island it does just that, but it also holds the title of being Northern Ireland’s only inhabited island with a population of about 140.

That would be the people.

Rathlin is also home to plentiful wildlife including seals and significant numbers of seabirds including kittiwakes, razorbills, guillemots, and those charming favorites, puffins.

At this point, you are facing true west and into what is the very heart of the Causeway Coastal Route.

This is where you can trip the light fantastic, or perhaps not, by stepping onto the famed Carrick-a-Rede rope bridge.

The bridge is about a hundred feet above the sea and has linked Carrick Island and the County Antrim mainland for around 350 years.

Don’t worry, the bridge has been maintained and upgraded and you can take in the view with ease, that being the view below, above, and all around.

Down the road a wee bit, the visitor reaches the place that gives the Causeway Route its name. The Giant’s Causeway is a natural wonder that looks like it was deliberately set in place.

Lonely Planet has opined that it "looks for all the world like the handiwork of giants.”

You can take your pick: a geological phenomenon dating back sixty million years, or a battleground for giants?

Look at it long enough and both explanations seem to work.

They say that the Giant’s Causeway at sunset will be a standout lifetime memory.

The Causeway Coastal route, of course, include the Giant's Causeway in Co. Antrim. Image credit: @storytraveler

Well, before the giants set to it again this might be the moment to repair inland a bit to the village of Bushmills, home of the famous distillery, and a place now noted for its fine food too.

Distilling here dates back to 1608 and Bushmills is the oldest location with a license to distill on the island of Ireland.

The distillery’s doors are open to visitors and they come from all over the world.

Onwards to the haunting ramparts and towers of Dunluce Castle, which dates back to the 13th century.

When you cast eyes on Dunluce you can immediately see that, back in the days of sieges and such, it was intended for invited visitors only.

Well, this is a time for visitors.

Not too many arrow shots from Dunluce is Royal Portrush, one of the most famous links golf courses in the world, the venue for The Open Championship in 1951, and host again in 2019.

This is the last significant stop on the Causeway Coastal Route in County Antrim, but if you stop here there is more than golf to enjoy.

This stretch of the coast offers fine beaches, places to swim and walk and work up an appetite in clean, vigorous air. And local hospitality is ready for your appetite, the area being increasingly rated for its restaurants and hostelries.

Over the county line and the golf theme endures with Portstewart – of the aforementioned comparison to Pebble Beach.

A quick diversion here can mean a visit to the town of Coleraine, and then it’s back to the Causeway Coastal Route as it meanders towards the walled city of Derry/Londonderry.

Before those walls, a stop at Downhill Demesne is recommended. Downhill is the site of one of Northern Ireland's most iconic landmarks, Mussenden Temple.

It was originally built as a replica of the Temple of Vesta in Italy, a folly of course, but one to behold, though perhaps while shaking one’s bemused head.

Not far away is Mountsandel, purportedly the oldest archaeological site on the island of Ireland. That’s quite a title since there have been people on the island for, give or take, 9,000 years.

And onwards again to the route’s final destination, Derry/Londonderry, a city that has undergone a renaissance in a time of peace, and which has opened its gates wide to welcome and embrace the visitor from near and far.

Here is a place to linger and enjoy.

And at the end of it all, well, there is always the road back to Belfast.

Been there, done that you say.

Not really, because not all the places to visit have been mentioned in these few lines.

So back you go. Same distance, more or less.

But twice the enjoyment.