These eight Irish hotels feature on the 2020 Forbes Stars Awards list - a prestigious ranking of some of the world's best hotels. 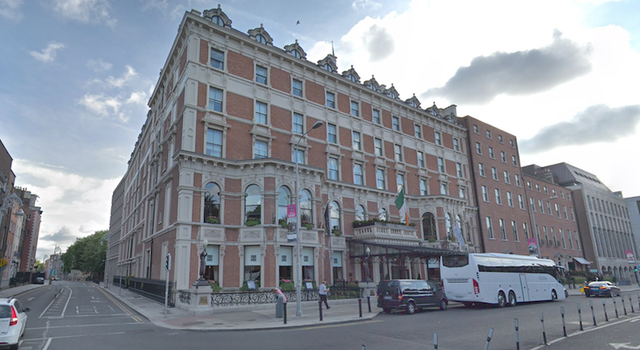 These eight luxury Irish hotels have made it onto Forbes' 2020 Stars Awards list - a compilation of some of the best hotels in the world.

Almost all of the hotels are located in Dublin, with just two exceptions - the K-Club in Kildare, location of the 2006 Ryder Cup, and Ashford Castle in County Mayo.

From modern luxury hotels to old-fashioned hotels steeped in history, they are some of the most exclusive places to stay in Ireland.

The business magazine compiled its annual list of the most luxurious hotels in the world from a total of 73 countries. In total, 1,898 hotels were deemed worthy of a place on Forbes' list and these Irish hotels were judged to be the cream of the Irish crop.

Arguably Ireland's most famous hotel, The Shelbourne Hotel on St. Stephen's Green is one of its most luxurious.

The hotel had a part to play in the Easter Rising of 1916 when British soldiers used upper rooms as a vantage point against rebels who were fighting in the park below.

Read more: One of Ireland's most iconic hotels had a makeover and it's stunning

This hotel rose to international prominence in 2006 during the aforementioned Ryder Cup.

It is the pinnacle Irish hotel and golf resort and offers guests a chance to play on a professionally recognized course.

Inside, the hotel offers extremely comfortable rooms and a sizeable swimming pool.

With sweeping lawns and an aesthetically pleasing interior, it's easy to see how the K-Club made it onto Forbes' list.

Situated a stone's away from Ireland's parliament, The Merrion is a grandiose hotel in the heart of Ireland's capital.

Similar to the Shelbourne, the Merrion is tastefully decorated with vintage furniture and comfortable rooms.

It is as worthy as a place on Forbes' list as any Irish hotel.

Situated in the affluent area of Donnybrook in Dublin's suburbs, the Intercontinental is one of the more modern hotels on the list.

The well-known hotel chain provides luxury service across the world and Dublin is no different.

With extremely comfortable rooms and large surrounding grounds, the hotel is worth its place on Forbes' longlist.

A modern hotel on Dublin's docklands, the Marker is a stylish and contemporary addition to Dublin's hotel scene.

Featuring a rooftop terrace with stunning views of the River Liffey and Dublin City Center.

Dark and elegant on the inside, the Marker is worth a stay on one of those city breaks to Dublin.

Ashford Castle is perfect for any guests looking for an authentic ancient experience.

With turrets and towers aplenty, the hotel stands as a relic to Ireland's ancient past.

The castle's grounds are home to tennis courts for those guests who fancy some recreational activities on their getaway, while the surrounding woods are perfect for a surrounding stroll.

The castle's interior boasts a billiards room, an old-fashioned cinema, and four-poster beds to really make visitors feel like they've taken a step back in time.

Read more: Vacation in pure luxury in one of these Irish castles

Located just off Grafton Street, Dublin's most famous shopping street, the Fitzwilliam Hotel is about as convenient as it gets.

Guests have the chance to wander into the park on Stephen's Green or onto the high-end shopping street without breaking a sweat and, for that reason alone, it could almost be afforded a place on Forbes' list.

However, it also an ultra-comfortable, modern hotel that gives visitors to chance to kick back in style at the end of a busy day exploring Dublin's many sites.

If the Fitzwilliam Hotel deserved a place on Forbes' list based on convenience alone, then the Westbury probably deserves to top the list.

Like the Fitzwilliam, the Westbury is located within steps of Grafton Street. In fact, it is almost located on the street itself.

With spacious and tastefully decorated rooms, the Westbury is one of the most high-end hotels in Ireland's capital.