Why Ireland is the ultimate destination for Star Wars fans

To find the magic of Star Wars, you don’t have to journey to a galaxy far, far away – it’s right there in Ireland, where much of The Last Jedi was filmed 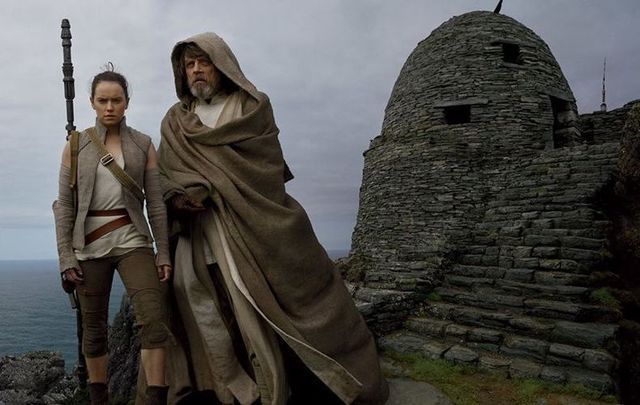 Daisy Ridley and Mark Hamill in The Last Jedi Disney/Lucasfilm

To find the magic of Star Wars, you don’t have to journey to a long time ago in a galaxy far, far away – it’s right there in Ireland, where much of The Last Jedi was filmed.

A Star Wars fan since I was gifted a VHS box-set of A New Hope, The Empire Strikes Back, and Return of the Jedi for my 9th birthday, I was pretty much beside myself with excitement for the premiere of Star Wars: The Force Awakens back in 2015.

Watching it in a packed theater on opening weekend, I cheered along with the audience when familiar characters like Princess Leia (the late, great Carrie Fisher) and Han Solo (Harrison Ford) graced the screen and was dazzled by the new inhabitants of the Star Wars universe like the courageous Rey (Daisy Ridley) and terrifying Kylo Ren (Adam Driver).

But the appearance that filled me with the most joy and awe didn’t happen until the end of the movie, and it wasn’t even a speaking role. No, I’m not talking about Luke Skywalker (Mark Hamill), I mean the Irish island of Skellig Michael, which was the setting for the planet where Skywalker had been hiding.

The Skelligs from above. Photo: Valerie O'Sullivan

Having spent time traveling Ireland and writing about the Emerald Isle daily, I know full well how majestic, other-worldly, and stunning the Irish landscape is, and with The Force Awakens, I was excited for Ireland to get its prime-time, big screen moment. Sure enough, there were audible gasps and “wow”s when the cameras first panned over Skellig Michael and Little Skellig. Later, talking about the movie with friends, I was proud to tell them that yes, that was in fact a real place, and it was in Ireland.

It seems that Lucasfilm producers and the Star Wars cast were also very impressed, because they spent even more time in Ireland filming the next installment, The Last Jedi, and went to an even greater number of Ireland filming locations in Kerry, Donegal and West Cork.

During and after filming, neither new director Rian Johnson nor the film’s stars held back one iota when it came to talking about how much they loved being in Ireland.

That's a wrap on the emerald isle. Thanks to all the lovely amazing people here who have made our shoot extraordinary.

When they wrapped, they even took out an ads in the Irish Examiner and local papers in Kerry and Donegal thanking the locals and their Irish crew.

With The Last Jedi in theaters now, chances are that in addition to attempting to work on your Jedi mind control powers, you might also be yearning for a trip to Ireland to walk in the footsteps of Luke and Rey and see all the stunning filming locations in person.

Whether planning a dedicated Star Wars trip or incorporating these attractions into a larger tour of Ireland’s tremendously popular Wild Atlantic Way coastal route, here’s how to plan the ultimate Star Wars fan trip of Ireland.

Go mbeidh an fórsa leat! — May the force be with you!

This UNESCO World Heritage site off the coast of Co. Kerry in Ireland’s south-west has long been a popular destination, but since its Hollywood close-up in The Force Awakens, interest in this rocky former monastic settlement has sky-rocketed.

Visit Skellig Michael and you’ll be walking in the footsteps of not only the Star Wars cast and crew, but also the monks who lived there and built the stunning steps and beehive huts between the 6th and 12th centuries. The island is accessible only by boat, with local operators and fishermen giving tours. Be sure to book well in advance as space is quite limited and access also depends on the tide and the weather.

For The Last Jedi, the Star Wars team went all the way to the tippy-top of Ireland, to its most northerly point, Malin Head, on the Inishowen Peninsula in Co. Donegal. It’s the perfect starting point or end point for a Wild Atlantic Way adventure.

The breath-taking cliffs were home to a Millennium Falcon replica for a number of days during filming, but during a typical day on Malin Head, attractions include Banba’s Crown, a lookout tower built by the British in 1805 as a watchpoint for Napoleonic invaders. There’s also a restored “Erie” landscape sign, used in WWII to inform pilots they were flying over a neutral Ireland. At nighttime, Malin Head is one of Ireland’s best spots to catch a glimpse of the Northern Lights. Before or after, grab a drink at nearby Farren’s Pub – Mark Hamill himself was a patron.

With the Shannon Estuary on one side and the vast Atlantic Ocean on the other, Loop Head Peninsula in Co. Clare offers some of the most gorgeous views – all the better seen from Loop Head Lighthouse, which dates back to 1854 and was renovated and reopened to the public in 2015. You can even spend the night there as part of a special program with the Irish Landmark Trust.

Loop Head is just an hour and a half’s drive from Shannon Airport. Take the Loop Head Drive, or walk the Loop Head Heritage trail. Get to know the charming nearby towns of Kilkee and Kilbaha, or explore the natural wonders with birdwatching or aquatic focused tours.

In addition to being a jaw-droppingly beautiful spot in its own right, Ceann Sibéal or Sibyl’s Head on the Dingle Peninsula in Co. Kerry played a dual role for the Star Wars team, filling in as something of a location double for Skellig Michael, which due to its special preservation designations could only host the crew for a limited number of days. Instead, they re-built some of Skellig Michael’s signature beehive huts on Ceann Sibéal.

This proved to be great fun for Mark Hamill and the rest of the Star Wars cast and crew present who got the added bonus of being able to enjoy Dingle, one of Ireland’s most famous and beloved towns. According to local reports, they were patrons of Bean in Dingle, ‘Idás Restaurant, Global Village restaurant, and Dick Mack’s Pub.

The Star Wars cast and crew sure got around Ireland! Not only did they film at Malin Head, the northernmost point, they also set up shop for a few days at Brow Head in west Co. Cork, the southernmost point in all of mainland Ireland.

At Brow Head, not only will you find a surviving British Signal Tower from 1804, but the nearby village of Crookhaven is a popular summer destination, with the year-round population of about 60 inhabitants surging to 400 during the warm months as visitors and vacation home owners flock to enjoy the sunshine. Crookhaven is a two-hour drive from Cork City, with some of the county’s best towns for both history and tourism, such as Cobh, Kinsale, and Skibbereen, along the way.

To find out more about Star Wars, The Last Jedi and the filming locations in Ireland visit ireland.com/starwars