A new exhibition at the National Museum of Ireland has opened celebrating the life of the Irish patron saint on the 1,500th anniversary. 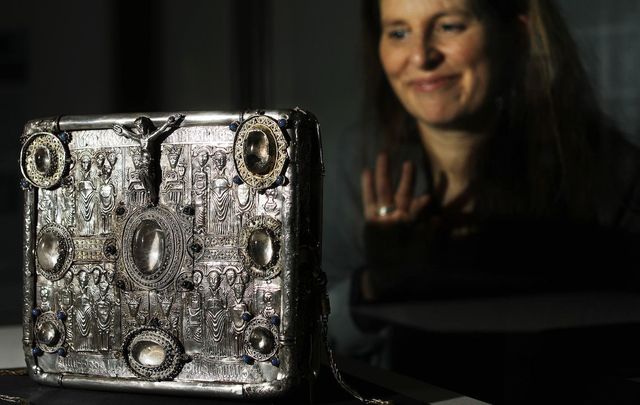 Artifacts on display at the Dublin city museum, as part of "Colmcille: Sacred objects of a Saint – 1500 years of devotion", include the Shrine of the Cathach, the Bell of St. Columba, and the Crozier of St Columba.

Colum, (Columba in Latin, and Colmcille as he became known in the Irish language) was purportedly born in Donegal and lived throughout the sixth century. St. Columba established the ecclesiastical site of Kells, County Meath, and the hugely influential and prosperous monastery of Iona in Western Scotland.

Prominent objects associated with St. Columba are the focus of this exhibition including the Shrine of the Cathach - a book shrine dating from the 11th century constructed to contain a late sixth/ early seventh century manuscript known as the Cathach, or the "Battler", believed to have been written by St. Columba. It was the battle standard of the O’Donnells, Columba’s kinsmen, and is regarded as the chief relic of the family.

Other prominent artefacts include the Crosier of St. Columba, the Shrine of the Miosach, and the Bell of St. Columba from which it was believed that drinking water from could cure disease. A beautiful embroidery of Columba by Lily Yeats from 1920s is also included to represent the saint’s continued legacy.

Speaking at the launch, Keeper of Irish Antiquities at the National Museum of Ireland, Maeve Sikora, said “It brings me great pride to be here and help launch this exhibition... another addition to the proud history of Ireland’s preservation and display of medieval artefacts. These objects on display are both national and international treasures and it’s incredible that that many of which were made over 1,000 years ago.

“They are important to so many people from so many walks of life. These objects are symbols of power and devotion. Not only do they survive for us to see today, but often the inscriptions on these objects name those who commissioned the shrine, the keeper who was entrusted with its care, and even the craftsman who made them. Incredibly, we know, for example, that a man named Sitric, made the Shrine of the Cathach in the eleventh century.  I want to encourage anyone interested to come down and have a look at these wonderful pieces of our history.”

Lynn Scarff, Director of the National Museum of Ireland, said “What I find really fascinating within this exhibition is that it not only tells us about the objects, but it also tells the remarkable story of how they came to be preserved. Care of these relics was initially entrusted to the hereditary tenants of church lands, several of whom held the objects for generations until the 19th century.

“Many were acquired from these families by the Royal Irish Academy and were later transferred ultimately to the National Museum of Ireland. I think the story of their care speaks so poignantly to Columba’s legacy in Ireland, even today and I am so proud that the National Museum is a part of the history in preserving these treasures for the next generation.”

Here's a short RTE Radio 1 interview with Maeve Sikora, Keeper of Irish Antiquities at The National Museum of Ireland on the exhibition:

Find out more at Museum.ie.