Formed over 300 million years this popular tourist attraction was the site of a Viking massacre. 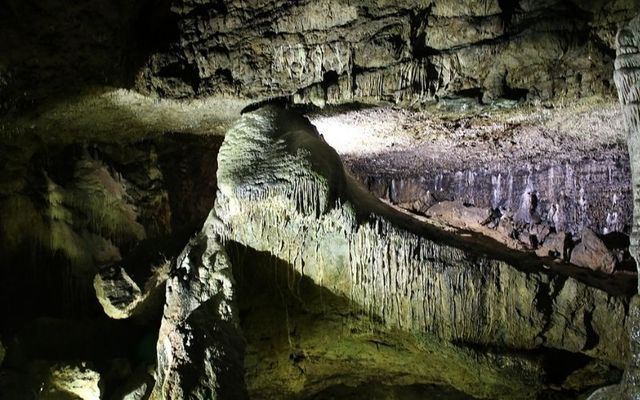 Formed over 300 million years the Dunmore Cave, in Kilkenny, a popular tourist attraction, was the site of a Viking massacre. Wikimedia Commons/Jan-Philipp Litza

Dramatic calcite formations in Kilkenny are small but perfectly formed over the millennia. Dunmore Cave includes a bat colony and even skeletons encrusted in the limestone.

Editor's note: Due to the COVID-19 pandemic travel is currently restricted. Please contact your country's government for further advice and updated restrictions. For now, we can dream right?!

Formed over 300 million years the Dunmore Cave contains some of the most dramatic calcite formations in Ireland and has been mentioned in annals throughout the centuries including as far back as the 9th-century Irish Triads. The annals also provide references to a Viking massacre that took place there in 928 AD.

The Dunmore cave is a limestone cave and it's located at Ballyfoyle, County Kilkenny. The entrance is in the townland of Mohill, where a visitors and exhibition center has been established. Just 6.8 miles outside Kilkenny City the Dunmore Cave is comprised of a quarter of a mile of passages. At its deepest point, the cave is 150 feet below the ground.

While the Dunmore Cave is smaller than many other cave complexes in Ireland, it is the wonder of the cave's calcite formations, its scientific noteworthiness, and connections to history that make it fascinating.

The cave has been millennia in the making, but it’s only in recent years that attempts have been made to unravel its history. In 1944 the cave was designated a National Monument by the Commissioners of Public Works, but the development of a visitor center did not begin until 1967. This was at the behest of archaeologists and speleologist J. C. Coleman. Dunmore Cave was closed in 2000 for archaeological work and redevelopment and reopened in 2003.

The caves are now accessible via stairs and walkways and extensive lighting makes for dramatic and easy viewing of the calcite deposits, plants and animal life. At one point the cave was home to a bat colony and some of their skeletons can be seen encrusted in the calcite limestone. The most spectacular calcite display is that Market Cross, a distantly cross-shaped column that measures 19 feet / 5.8 meters high.

The earliest archaeological writings on the cave came from Bishop George Berkeley in 1706. He had visited as a boy and in his essay, which was not published until 1871, he gives a detailed report on the cave.

In 1869 Arthur Wynne Foot, a physician, made an archaeological visit to the cave with Reverend James Graves and Peter Burtchaell. They discovered large quantities of human remains during their visit. They were collected. In his reports Foot meticulously documented his findings and his work became a source of reference for all those studying the area over the next 120 years.

In 1999 a hoard of 43 silver and bronze items was discovered in the cave. Archaeologists dated these items, including silver, ingots and conical buttons woven from fine silver to 970 AD.

The earliest reference to the caves can be found in the Triads of Ireland, dating from the 9th century, where “Úam Chnogba, Úam Slángae and Dearc Fearna" are listed under the heading, "the three darkest places in Ireland." “Dearc Fearna,” meaning the “Cave of the Alders" is thought to be the present Dunmore Cave. The other two, “Úam Chnogba, Úam Slángae,” translate as the caves of Knowth and Slaney (most likely those at Baltinglass).

In the “Annals of the Four Masters,” from the 17th century, Dearc Fearna was recorded as the site of a great Viking massacre in 928 AD. It states that Godfrey, grandson of Imhar, with the foreigners of Ath Cliath, demolished and plundered Dearc Fearna, where one thousand persons were killed.

Admission to the caves is by guided tour only. The caves are open seven days a week and tours start from 9.30 am. Unfortunately, the caves are not accessible via wheelchair.