We list the best hangouts and cultural institutions frequented by NYC’s Irish community. 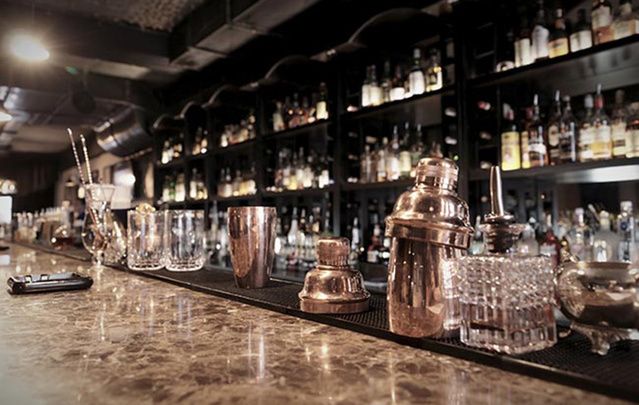 Read our pick of the top Irish spots in NYC iStockphoto

The Irish have a long and storied history with New York City and for anyone new to NYC the choice of activities, bars and restaurants can be overwhelming.

To make things simple, we asked our Irish and Irish American friends in NYC to come up with some of the top Irish spots – some are pubs, some restaurants, and some cultural centers. Some are perennial favorites, while others are new to the scene, but what they all have in common is a commitment to providing that famous Irish friendliness and to keeping Irish culture, heritage and craic alive and well.

The Dead Rabbit, one of the most decorated bars in NYC, is nestled down among the high rise buildings of the Financial District and is the best-kept secret of Wall St denizens and Irish people alike.

Set up by two Belfast men, Sean Muldoon and Jack McGarry, recipient of the prestigious International Barman of the Year 2013 award, the Dead Rabbit sets the standard in New York for top class service, delicious food and of course, their exhaustive drinks menu. In the grand tradition of many old Irish alehouses, The Dead Rabbit has a grocery attached to the bar that will a catch the heart of any Irish person, with Barry’s tea, Tayto cheese and onion all on offer.

Although The Dead Rabbit is a recent enough arrival on the scene at four years old it has quickly established itself as one of New York’s best bars.

The Irish-owned Brass Monkey has been in business for over ten years and has a well-earned reputation as an unpretentious pub in the usually snobby Meatpacking District.

The bar is set across two floors with an extensive range of drinks. The Brass Monkey is at its best, however, when the rooftop garden is open during the summer months, affording its patrons a stunning view of the Hudson River. The Brass Monkey attracts a diverse crowd from all over the city, but it remains a perennial favorite for both visiting and resident Irish people thanks to its great location and friendly service and atmosphere.

The Late Late Bar, opened in 2014, has already become a fixture on the nightlife scene for young Irish people in New York. Located on East Houston St on the trendy Lower East Side bar scene, The Late Late is named after the famous late night Irish talk show ‘The Late Late Show.’

The walls are adorned with kitschy Irish memorabilia, both fondly mocking and celebrating our Irish roots. This busy bar is a fun mix of young Irish professionals and the trendy East Village/Lower East Side crowd, both for after-work drinks and weekend dancing.

With a great music sensibility and reasonably priced drinks (and the occasional Niall Horan sighting) The Late Late has established itself as a top Manhattan venue.

The most common Irish imprint on New York is, of course, the Irish pub, with one found on nearly every street in the city. Tucked away at the border between the East Village and Alphabet City, St. Dymphna’s is a cozy, small Irish pub with a traditional Irish aesthetic both inside and out.

Named for the Irish patron saint for mental disorders, St. Dymphna’s exudes the same atmosphere as a quiet, local watering hole in Ireland. The drink is reasonably priced and the food both hearty and easily washed down a very decent pint of Guinness. St. Dymphna’s is well worth a visit if you’re looking a few drinks in comfortable surroundings.

Fraunces Tavern is a national historic landmark that includes the aforementioned tavern, a restaurant, and a museum.

The Irish-owned bar is situated down on Pearl Street, at the heart of the Financial District and enjoys a steady stream of diverse visitors, from tourists from County Clare to the high rollers of Wall Street.

The Dingle Whiskey Bar in Fraunces Tavern has over 200 types of whiskey and is named for the picturesque County Kerry town. This iconic bar is both a friendly Irish establishment and an American landmark – visit the museum and head down to the bar for a well-earned whiskey after.

The list of Irish bars in Manhattan is endless, but here’s a brief word on other choice locations:

Kelly’s Sports Bar (East Village) – Kelly’s is a well-known sports bar on the Lower East Side and has screenings of all American sports and is known particularly for its hockey fanaticism. All major Premier League and Champions League games are played and the laid back vibe and great staff make it a great spot for a pint for sports lovers.

O’Reilly’s (Midtown) – This Midtown bar is a popular spot for after work drinks. Located just a few streets away from Macy’s, it attracts a nice crowd of tourists from Ireland as well.

McSorley’s Old Ale House (East Village) – McSorley’s is a New York institution; it is one of the oldest bars in the city and has counted presidents and poets among its patrons. The storied history of the bar imbues the place with a significance not seen in many other pubs; one gets the sense that McSorley’s will still be doing serious business long after we’re gone! Indecisive orderers need not worry – there are only two beer choices at McSorley’s: light or dark.

In addition to the Irish bars, there are a plethora of other Irish-flavored cultural centers.

The Irish Arts Center has been at the very heart of Irish cultural life for over forty years. Situated in Hell’s Kitchen, the events run by the Irish Arts Center run the gamut from lectures and readings to music and theater. There really is something for everyone. The Arts Center has a great ability to honor the rich Irish tradition in the arts while giving the spotlight to new, exciting work by emerging and established artists, writers, and performers. Keep an eye on their website for the calendar for the upcoming season.

Irish playwrights, actors and all kinds of theater folk can be found all over Broadway, with many going on to great success and fame – one needs just look to the sensation of ‘Once: the Musical’ to see evidence of this. However, there is one venue that guarantees an emphasis on Ireland and Irish America in every play they showcase: the Irish Repertory Theatre. The theater has garnered many accolades and awards over the years, showcasing the best of Irish theater and dance. The theater is currently housed near Union Square while renovations are on-going at its permanent home in Chelsea, where it will return in 2016.

Although it may technically be cheating to include a pub in the culture section, this is a bit of both: the Scratcher Sessions, a series of music events, are held at the Scratcher pub in the East Village. The Sessions invite a range of musicians, often Irish and Irish American, to play music across a range of genres, though most fall into the singer-songwriter and traditional music wheelhouses.