Now is an ideal time to visit Ireland and we have a list of all the great things to do and see before the end of the year. 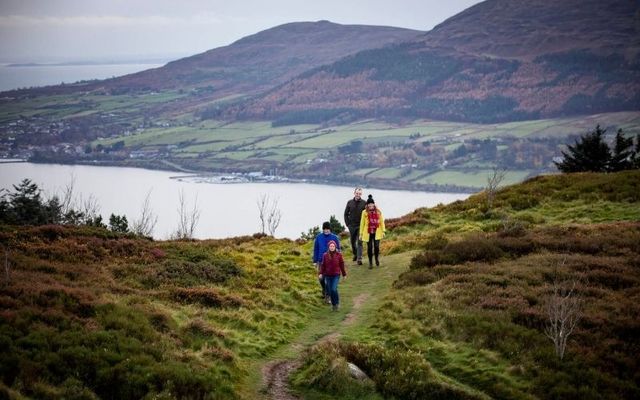 Have you been missing Ireland? The summer may be rolling to an end but there's still plenty to do and see in Ireland and plenty of time to do it. Why wait any longer, start planning your trip now!

Ireland is a magical island but especially during the fall months when the weather becomes crisp and the trees are filled with vibrant colors. We've put together a list of some great suggestions on what to plan for your trip to Ireland.

Road trip along the coast

Take the road trip you’ve always dreamt of along the Irish coast. There's a number of routes you can choose from, including the spectacular Copper Coast, located in Ireland’s Ancient East in County Waterford.  Extending from the coastline of Kilfarrasy in the east to Stradbally in the west, the Copper Coat is a UNESCO Global Geopark and is described as an outdoor museum of geological records.

You could also take a journey along the Wild Atlantic Way stretching from Kinsale in County Cork to the Inishowen Peninsula in Donegal. This route from start to finish unfolds the wonders of nature, the power of the ocean and its imprint on the west coast of Ireland, and the stunning countryside in all its diversity.

Plus don't miss out on the incredible Causeway Coastal Route in Northern Ireland. The designated waymarked route will take you around the north coast of Ireland between Belfast and Derry-Londonderry, passing through a variety of landscapes from river valleys, glacial glens, mountains, and headlands. 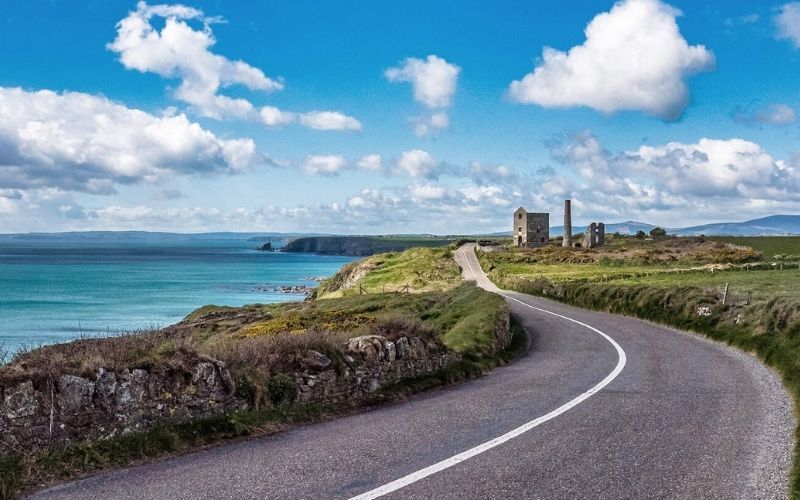 The Copper Coat is a UNESCO Global Geopark

Visit the places you have always wanted to see

Now is your chance to tick some boxes on your bucket list and visit the places in Ireland you've always wanted to explore. Travel to the Titanic Belfast in Northern Ireland and see how the world-leading visitor attraction tells the story of the RMS Titanic right in the heart of Belfast city. If you’ve always dreamed of visiting the Ship of Dreams, now’s a great time!

Experience the spectacular multicolored display of the Northern Lights dancing in the night skies above Donegal on the Wild Atlantic Way. As the most northerly point in Ireland, Malin Head in Inishowen is undoubtedly the best place on the island to witness the astronomical phenomenon.

We'd also recommend Hook Head Lighthouse in County Wexford on your list of things to see. Known for being the oldest operational lighthouse in the world, you're guaranteed to be blown away by the spectacular view from the balcony with miles of blue sea rolling out before you.

Also, take a peaceful stroll around Phoenix Park in Dublin and be mesmerized from a distance by the wild deer that roam the grounds. The park is also home to the residence of the President of Ireland known as Áras an Uachtaráin, Dublin Zoo and the U.S. Ambassador’s Residence, so there's an endless amount to explore. 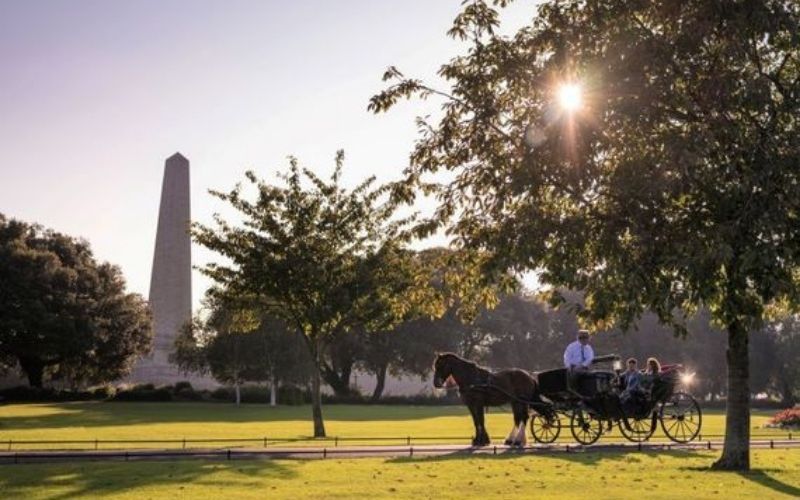 The Phoenix Park in Dublin

The cooler months are the perfect time for enjoying a smooth whiskey in a cozy pub while listening to the crackling of an open peat fire. Many restaurants on the island pride themselves on sourcing local and seasonal ingredients for their cuisine. Take advantage of the fresh, fall flavors by dining in some of the island’s best restaurants. Check out Cassidy's pub located in the Burren mountains in County Clare, the historical English Market in Cork City, or the Bushmills Inn in Northern Ireland. 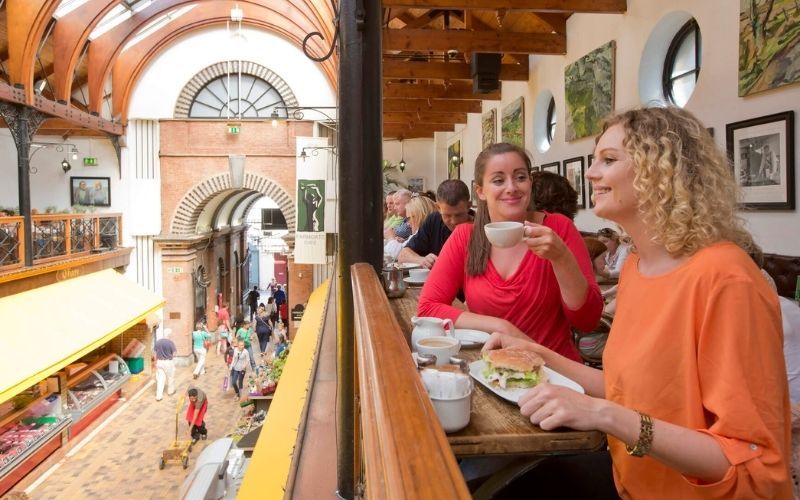 Dine in the historical English Market in Cork City

Spend Halloween in its birthplace

Did you know that Halloween originated in Ireland from the Celtic festival of Samhain? Soak up the spooky vibes and celebrate Halloween in the place it all began - Ireland!

Take a paranormal tour around Belfast's Crumlin Road Gaol and discover over 150 years of history in Northern Irelands only remaining Victorian era prison. Or visit Offaly's Leap Castle, home to many fascinating and sometimes horrific spirits.

Make sure to dine on colcannon, a traditional dinner to have on Halloween night. It's a simple dish made with boiled potatoes, fresh, curly kale, and raw onions. 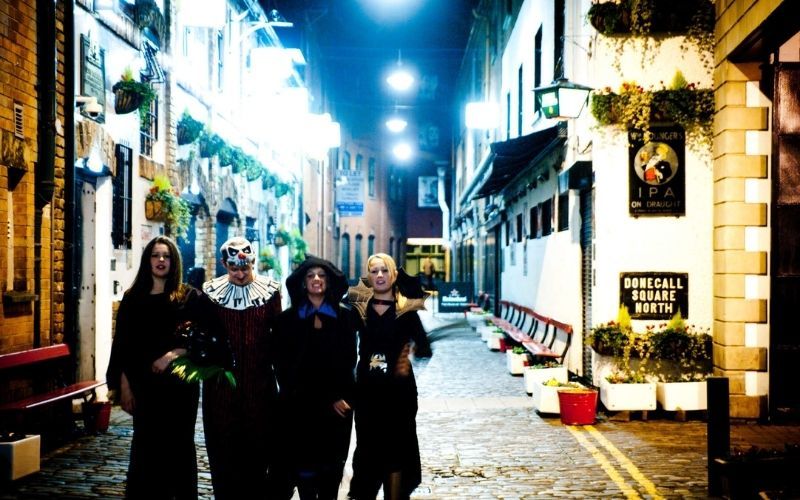 Spend the long Thanksgiving weekend with friends and family you can finally reconnect with. The fall temperatures in Ireland are mild so it's the perfect time of year for a leisurely walk or bike ride along many of Ireland's spectacular greenways.

The Old Rail Trail is just one of the bike routes you could take. Cycling from the bustling town of Athlone and ending in the elegant old market town of Mullingar, County Westmeath, you will hear nothing but birdsong and the crunch of leaves and as you lose yourself along the spectacular bike path.

You could also take the opportunity to explore the many castles that dot the island while catching up with loved ones. We'd highly recommend visiting the Rock of Cashel, County Tipperary in Ireland's Ancient East, home to an extensive collection of medieval architecture and Celtic art. 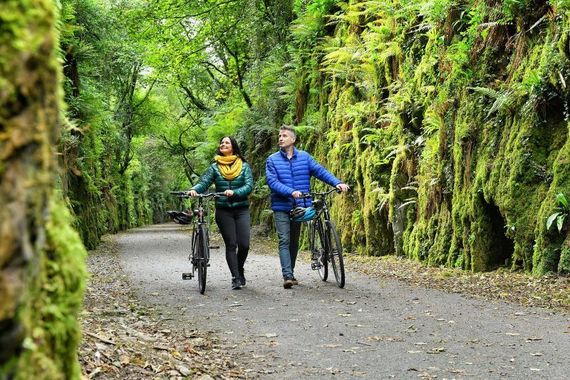 Soak up the holiday cheer

Immerse yourself in this feeling of joy by appreciating the magical lights hung for the holidays along Grafton Street in Dublin, festive shopping in Galway City, or just by spending quality time with the loved ones we were separated from for so long. 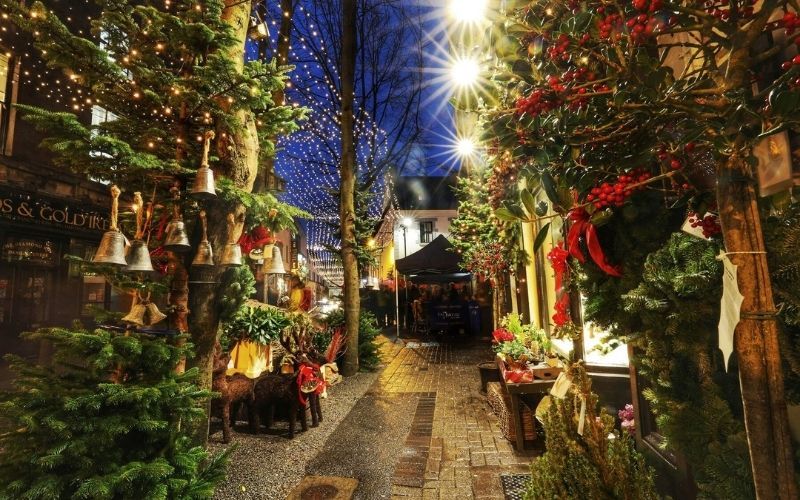 Soak up the holiday cheer in Galway City Center

We hope we have inspired you for your next visit to the Emerald Isle. Now, what are you waiting for? Ireland is calling, start planning your trip today!