Good conditions saw thousands take part in Reek Sunday, the most famous annual pilgrimage to celebrate mass at the peak of Croagh Patrick in Co. Mayo. 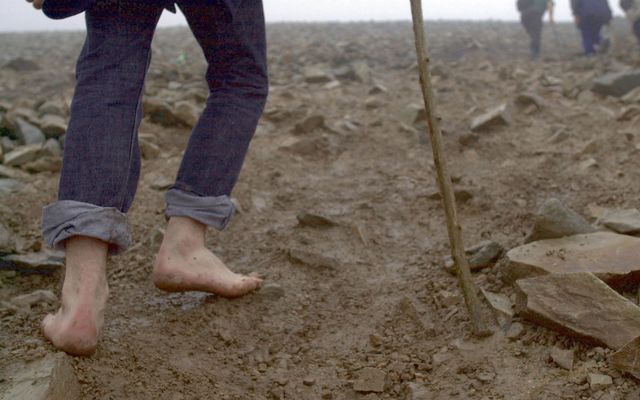 Conditions for Reek Sunday 2018 were much nicer than this 2002 image of the Croagh Patrick pilgrimage shows. LEON FARRELL/PHOTOCALL IRELAND

The annual Reek Sunday pilgrimage of Croagh Patrick saw few injuries as thousands started out at sunrise with good conditions to climb the mountain.

The fantastic weather in Ireland continued for just a little longer in order to allow thousands of devotees to pull on their climbing shoes early Sunday morning and take part in Reek Sunday, otherwise known as The Reek. The Catholic pilgrimage kicked off at sunrise as thousand started on the climb to the peak of Croagh Patrick to celebrate Mass.

One of Ireland and Mayo’s most famous landmarks, Croagh Patrick (sometimes referred to as the holiest mountain in Ireland) is located just outside of the beautiful and vibrant town of Westport and is known as the place where St. Patrick is said to have spent 40 days and 40 nights, praying and fasting during his missionary work in Ireland.

Pilgrims climb the 2,500-ft/764-meter mountain to the church at its peak every day of the year but thousands of visitors can be expected on the last Sunday of July each year, or “The Reek” as it’s locally known, to celebrate mass, beginning their pilgrimage at St. Patrick’s statue at the mountain’s base.

Although only the third highest mountain in Mayo, Croagh Patrick is a tough climb and some of the pilgrims do decide to undertake the endeavor in their bare feet. Fortunately, the good weather led to just 14 reported injuries this year, with one pilgrim being airlifted from the mountain.

“Conditions today have been very good, we've had very clear weather, the cloud base was above the summit,” said Mayo Mountain Rescue's Cameron Clotworthy.

Teams returning to Mayo Mountain Rescue Team base at the back of the Reek. The Mayo team are traditionally the last off the hill on Reek Sunday pic.twitter.com/UQxlsOhruc

“People climbing it had a relatively dry day. The conditions have been good and that assisted in the casualties not being that seriously injured.”

What is Reek Sunday?

Reek Sunday is an annual pilgrimage to celebrate Mass at the top of Mayo mountain Croagh Patrick.

When is Reek Sunday?

The world and it mother are out today. Reek Sunday #CroaghPatrick pic.twitter.com/xTo7rAkMmP

Have you ever taken part in Reek Sunday? Tell us about your experience in the comments section, below.