The National Famine Way is a 165km trail that traces the steps of the 1,490 famine victims who left Strokestown on a forced emigration to Canada in 1847. 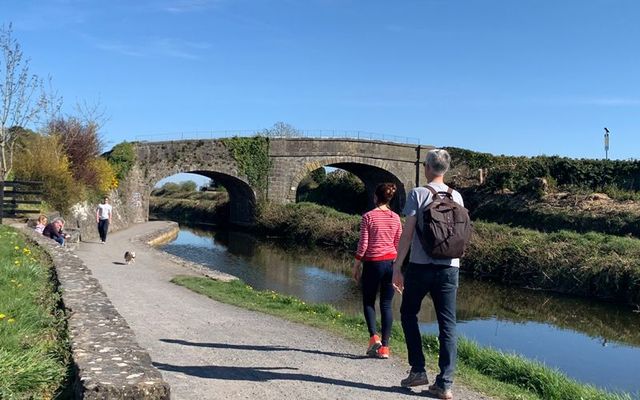 The National Famine Way is a 165km walking and cycling trail following in the footsteps of the 1,490 famine victims who left Strokestown on a forced emigration to Canada in 1847.

The accredited Heritage and Arts Trail begins at the memorial glass wall at The National Famine Museum, Strokestown Park in Roscommon. It follows pathways and quiet roads for 20km to Richmond Harbour at Clondara, and then extends along the entire length of the Royal Canal to Dublin.

The journey ends at the iconic famine statues and Jeanie Johnston Famine Ship, anchored at Custom House Quay, the spot where the “Missing 1,490” last touched Irish soil in May 1847.

The trail is waymarked by 32 poignant sculptures of bronze 19th-century children’s shoes along the route.

The National Famine Way commemorates the route taken by the famine victims who left Strokestown for Canada on a forced emigration by their landlord, Major Denis Mahon. The evicted tenants were “walked” under the surveillance of the Mahon estate bailiff John Robinson along the canal towpaths, from Strokestown to the Quays in Dublin and then on to Liverpool where they boarded four ships for the voyage to Quebec.

Prior to beginning the journey to Dublin, a cobbler was brought to Strokestown as many families were so poor, they didn't have shoes to walk the 165km route.#FamineWay#Missing1490#StrokestownPark pic.twitter.com/SH7xNqB8fG

The experience particularly focuses on 12-year-old Daniel Tighe, who walked the trail with his widowed mother Mary and four siblings.  Daniel and his nine-year-old sister, Catherine, were the only family members who survived the transatlantic voyage.

The self-guided trail, which is relatively flat and accessible for families, casual walkers and cyclists, is open and free to use. An accompanying app of the experience is available free of charge from both Apple and Android stores. It includes information on the trail, local history, maps and interesting facts.

In addition, a full immersive experience is available for recognized walkers who purchase the official National Famine Way™ pack and passport through the website.

The pack costs €15 and includes: a welcome and introduction to the National Famine Way™ at Strokestown; participant’s name entered on the official register; passport guide, which can be stamped at official over 30 stamping locations along the way; a ship ticket with details of one particular ‘Famine Family'; orientation map - Walking in the Footsteps, an OSI trail map; list of stamping locations; free tea/coffee along the entire trail at participating locations; discount vouchers for museums along the route; Certificate of Completion at EPIC The Irish Emigration Museum; End of Trail Booklet on what happened next to the 1,490 at the Irish Family History Centre at EPIC The Irish Emigration Museum; End of Trail ‘Your Family’s Fate’ - information on what happened to your ‘Famine Family’.

For more information on the National Famine Way, visit the website.

Stay like the locals in these Irish thatched cottage Airbnbs