Living the dream and traveling along the calming and historic river through the west of Ireland. 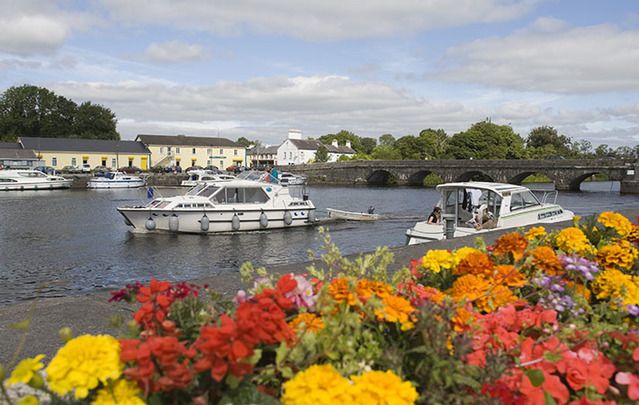 Living the dream and traveling along the calming and historic river through the west of Ireland. Derek Cullen / Fáilte Irela

The River Shannon has been our home since early summer. For the last two months my husband and I, both in our mid-60s, are living aboard our comfortable cruiser. We have travelled the length of this lovely river, all 224 miles of it.

Water is calming and a boat moves slowly – resulting in my busy mind becoming calm and still. We have no plans as we meander along. Some days we moor in small villages. Others days we moor in the middle of nowhere. All is so serene and peaceful that I have time to ponder on the past- on the history and legends associated with this beautiful majestic river.

According to Irish mythology, the Shannon is named after a woman called Sionann. She went to Connla's Well to find wisdom, despite being warned not to approach it. She, like Fionn Mac Cumhaill, caught and ate the Salmon of Knowledge and became the wisest being on Earth. However, the well then burst forth, drowning Sionann and carrying her out to sea.

The many islands on Lough Ree and Lough Derg were very holy places where the remains of old churches still stand. In 545AD Saint Ciaran founded his famous monastery in Clonmacnoise, on the River Shannon, south of Athlone. Students, from all over Europe, came there to study. At that time our small country was known as ‘The Island of Saints and Scholars.’

The Vikings arrived in the 10th century. They carried their long boats across County Meath from the Irish Sea and used the River Shannon to raid the rich monasteries deep inland.

The Normans followed in 1170 and built castles in Limerick and Athlone. These strongholds still stand. In the 17th century, the Shannon was of major strategic importance in military campaigns, as it formed a physical boundary between the east and west of the country.

After his conquest of Ireland Oliver Cromwell reputedly said the remaining Irish landowners would go to "Hell or Connacht", referring to their choice of forced migration west across the River Shannon, or death, thus freeing up the eastern landholdings for the incoming English settlers.

Read more: Watching the magic of Ireland go by - boating on the Shannon

In the Williamite War (1689–91), the Jacobites also retreated behind the Shannon after their defeat at the Battle of The Boyne in 1690. Athlone and Limerick, cities commanding bridges over the river, saw bloody sieges.

The Shannon River is closely bound up with Ireland's social, cultural, military, economic and political history

Irish weather is moderate, rarely too hot or too cold. It does rain sometimes; however, this is a small price to pay for the beautiful 40 shades of green which surround us on all sides. The meadows, hills and fields are lush and fertile. Old castles, round-towers and remains of cottages – deserted during famine times – are visible as we cruise along the tranquil still waters. Swans glide by and purple-loosestrife blooms along the bank, close to the lovely water lilies.

Other Irish people, like ourselves, own boats and spend their holidays on the river. Wealthy German and Swiss people hire cruisers on the Shannon and absolutely love the fresh air and silence. They fish and relax. They return again and again. The advantage of seeing Ireland from the river is that tourists get to visit small villages and country-side that tour buses never pass. They get to talk to local people at the quay walls and in the Irish bars.

We meet many interesting people all the time. Last night we moored in a very small village in County Roscommon. We walked from our boat to one of the old pubs there. As soon as we opened the door we saw (and smelt) a real turf fire burning in the grate.

There was a chill in the air – so this was very welcome. Four American tourists came in behind us. They were from Maine and had rented a boat for a fortnight. We had a great night, chatting and warming our toes, as we drank glasses of Guinness together. An old man insisted on reading an extract from a book for us, called ‘Thanks For The Memory’ by H. R. Rice.

“There is a family living on Lough Ree about which it is reputed that one son in every generation has ‘the second sight’ and is endowed with the power of seeing a leprechaun. If he can keep this leprechaun spellbound by an uninterrupted gaze the leprechaun will have to pay forfeit by leading him to a crock of gold.”

We all walked back to our boats together. We hadn’t drank enough Guinness to see any leprechauns!

Our boat is very comfortable. Family and grandchildren visit us now and then. We hope to remain afloat until September because we think that there is nowhere in the world nicer than the majestic River Shannon.