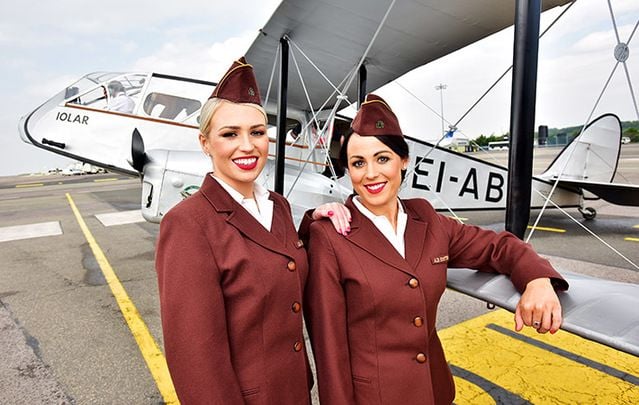 Aer Lingus has celebrated 80 years of flying having launched its first ever flight from Baldonnel to Bristol on this day in 1936.

To recognize this incredible milestone, Aer Lingus has flown the Iolar, a replica of the a six-seater De Havilland 84 Dragon which made that first journey with only five passengers, to Bristol once again, 80 years later.

While its first aircraft might only have had the capacity to accommodate six passengers, the national airline now boasts a fleet of 62 aircraft and connects 12 million people from Ireland and across the world to more than 100 destinations throughout Europe and North America.

Aer Lingus’ first transatlantic flight came in 1958, from Dublin and Shannon to New York, and more than 60 years later the airline operates 12 direct services to North America. 2016 in particular is a standout year for transatlantic growth as Aer Lingus introduces three new direct routes to North America – Los Angeles, California which began on 4th May, Newark, New Jersey which will commence on 1st September and Hartford, Connecticut on 28th September.

Aer Lingus CEO Stephen Kavanagh said “We are delighted to celebrate 80 years of flying at Aer Lingus. 2016 has been a very exciting year for Aer Lingus so far – we recently commenced our new Los Angeles service and in September our Newark, New Jersey and Hartford, Connecticut services will commence. These new routes open up new tourism and business opportunities with improved connectivity through our Dublin Gateway. We are proud of our 80-year history of connecting Ireland to the world and will continue to fly the shamrock high for the next 80 years.”

In its inaugural year Aer Lingus operated three routes, carrying 892 passengers and employed a total of 12 staff. In 2016, its 80th year of service, the airline carries 12 million passengers, flies 117 routes and provides employment to 4,000 staff.

Milestone events at Aer Lingus throughout the decades 1936-2016:

Aer Lingus Teoranta was registered as an airline in 1936. Teoranta means ‘limited company’ and ‘Lingus’ is derived from the Irish ‘loingeas’ meaning fleet. In 1936, Aer Lingus introduced the Dublin to Bristol route at Baldonnel Aerodrome. In 1940, Aer Lingus moved into the newly completed Dublin Airport.

1936 - Aer Lingus took delivery of its first aircraft, registered EI-ABI, on 26 May 1936 and named it "Iolar" (Eagle). This was Aer Lingus' first and only aircraft and it was based at Baldonnel Aerodrome, the Irish Army Air Corps base outside Dublin. At 0900 hours, May 27, 1936, the aircraft took off from Baldonnel on Aer Lingus' first flight from Baldonnel to Bristol. Within a few weeks, summer service began to the Isle of Man.

1936 - In September the network was extended to London (Croydon Airport) using a newly-acquired De Havilland DH86.

1946 - Paris added to the network, becoming the first Continental European city to be served by Aer Lingus.

1958 - The DC-3 (was also widely known by its RAF name, the Dakota) were replaced by new Fokker F27 Friendship twin turboprops.

1958 - Aerlinte Eireann, originally formed in the 1940s, re-establishes and on the 28 April the first service leaves Dublin and Shannon for New York.

1958 - The shamrock replaces the Irish flag on the tail of Aerlinte Eireann aircraft and a year later is extended to the European fleet.

1960 - Aer Lingus enters the jet age, with Boeing 720s covering the routes from Dublin and Shannon to New York and Boston.

1966 - Montreal and Chicago added to the transatlantic network in April.

1969 - Boeing 737-200 introduced into service. The aircraft became the mainstay of our short-haul fleet for many years.

1979 - Pope John Paul II flies from Rome to Dublin and later from Shannon to Boston on an Aer Lingus plane that has been specially chartered for him.

1993 - The Cahill Plan was introduced. This restructuring programme was launched to address the commercial challenges of the airline, at that time.

1994 - Airbus A330 introduced into service on transatlantic routes. Aer Lingus was the first airline to operate an A330 under ETOPS (Extended-range Twin-engine Operation Performance Standards) over the North Atlantic.

1995 - On the 2nd of October the last Aer Lingus Boeing 747 flight takes place after 25 years of service. By that time, over eight million people had travelled across the Atlantic in Aer Lingus ‘Jumbo Jets’.

1995 - Introduction of BAe146 into fleet in April to replace turboprops on UK routes.

1997 - Newark service inaugurated in May.

1998 - Introduction of Airbus A321 into service in May, used initially on busy Dublin-Heathrow route.

2006 - Aer Lingus is floated on the Irish and London Stock Exchanges.

2007 - Open Skies agreement provides Aer Lingus with new opportunities to grow its long haul network and within an hour of the announcement Aer Lingus announces three new routes to the U.S. Commencing with Washington D.C in August, followed by San Francisco and Orlando in October. Aer Lingus takes delivery of two new A330 aircraft. Aer Lingus carries in excess of 1 million transatlantic passengers.

2008 - Aer Lingus celebrates 50 years of Transatlantic flying on 28 April 2008. Aer Lingus embarks on a long haul aircraft product upgrade of its current fleet, which is rolled out from the end of 2008.

2010 - Aer Lingus celebrates 70 years of flights at Dublin airport. On the 19 January, 1940, Dublin Airport was officially opened when an Aer Lingus Lockheed 14 aircraft departed Dublin for Liverpool at 09.00 am, the aircraft having been positioned over from Baldonnel Aerodrome the previous evening.

2011 - The Iolar aircraft undergoes a restoration project meaning it is once again airworthy.

2014 - In April 2014 Aer Lingus commences its direct services to San Francisco and Toronto.

2014 - Also in April Aer Lingus becomes the first airline to have a present on the social media platform, Snapchat.

2014 - In October 2014 the new Aer Lingus Business Class is unveiled. Available on routes across the Atlantic, the offering now includes a new Vantage Seat which transforms into a fully-flat 6’6’’ (2 metres) bed, complimentary Wi-Fi, a new business class menu created with Irish food consultant, Hugo Arnold together with the very best in inflight entertainment.

2015 - In April 2015 Aer Lingus becomes the official airline partner to IRFU. As part of the partnership the Green Spirit was unveiled with a special branded livery featuring our four ambassadors which carried the team to the Rugby World Cup and the Six Nations.

2015 - In May of this year the inaugural flight to Washington takes flight.