Blue and fin whales photographed within miles of each other just off the coast of Clifden. 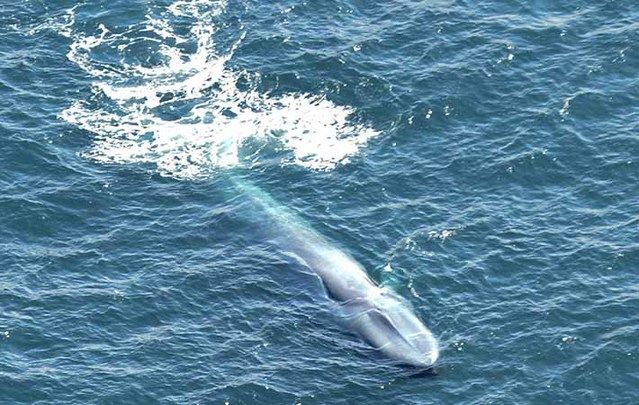 Blue and fin whales photographed within miles of each other just off the coast of Clifden.

The Irish Air Corp snapped some amazing photos of the whales off the coast of Galway while on a routine patrol. Irish Whale and Dolphin Group were particularly interested in this sighting as the spotted blue and fin whales within miles of each other, an unusual occurrence.

The whales were photographed by Corporal Pat O’Meara, one of four on board the 101 Surveillance and Airlife Squadron craft patrolling 120 nautical miles west of Clifden, County Galway.

Captain Sean McCarthy told IrishCentral the Air Corp completes this patrol route once a day, depending on the information provided by the navy, the police of their other liaisons.

Read more: Mayo and The Cliffs of Moher tours

He said “The reason for the Air Corp’s patrols is to provide information to the police, navy and other authorities and sometimes when we manage to spot something like list we pass the information along to the IWDG. Sometimes it’s helpful.

Already this summer we’ve had a Physicist out with us to see the lunar eclipse and we’ve had people studying algae from the sky.”

Although the Air Corp generally see Ireland from pretty different point of view and have captured some beautiful shots over the years McCarthy added “They haven’t had a sighting like this in the region in some time. The whales were both blue and fin which the IWDG were very interested in. The two pods were only miles apart and according to the experts that’s very unusual.”

On board every patrol flight for the Air Corps are five people: two pilots, two surveillance and radar technicians and a photographer.

McCarthy explained “The photographer’s role is to photograph sighting for legal reasons so there will be an official documentation of the issue, be it a trawler or so on.”

And then sometimes they document something magical like this.