The fifth-place winning entry in IrishCentral's My First Trip to Ireland contest! 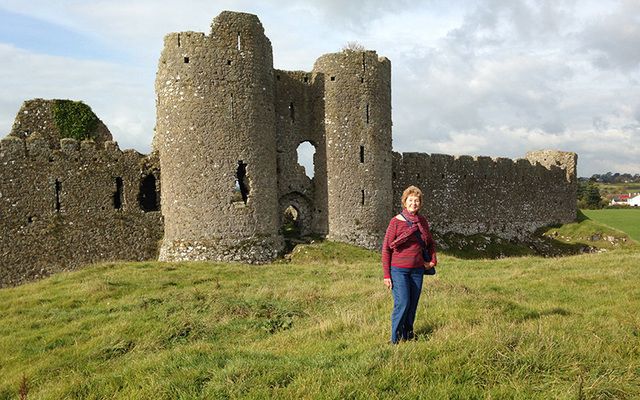 In January, we asked IrishCentral readers to submit stories about their first trips to Ireland, with the four runner ups being published in the days leading up to March 1, the start of Irish American heritage month, and the first-place winner receiving $300. We have been absolutely blown away by the submissions and have so loved hearing about the first time you set foot in Ireland. This is the story that snagged fifth place, out of 68 wonderful submissions. We loved Phil's observations and learning about his quest to walk in the footsteps of his ancestors.

"I've heard lots of Americans say their family had a castle in Ireland," my friend from Dublin said, "but you are the only one who can claim their family still lives in it!" I remember my mother telling me about it when I was a boy. For her 80th birthday, in 2014, my wife and I treated her so she could finally see it for herself. It was her first trip overseas, and our first trip to Ireland

We began our two week excursion in Dublin, then headed west through Cashel. We stopped in Lough Gur on our way to the Dingle peninsula, spending several days on the coast. Venturing back east we wandered through a bog, monasteries, and passage tombs, before ending our days in the land of my ancestors, an area once known as The Pale.

My ancestors were castle builders, so our first site was Bellew's Castle, a fortified medieval tower house that is now part of a school in Dundalk. We ended up going on a school day, so I'd resigned myself to just see the outside of the building, and taking Mom's picture with her hand on the wall. But as luck would have it, we arrived at break time. We met a teacher in the parking lot, then were introduced to Sister Triona, who gave us some history of the castle while taking us inside. We saw what was left of the original escape passage, and Mom had the thrill of her life when we got to climb onto the roof. I couldn’t help but smile when she climbed up that ladder and through the hatch faster than any of us.

Meanwhile, my wife stayed in the stairwell surrounded by school girls. They were putting on a play, and after learning we were from Alabama, they asked her to teach them the proper way to say "y'all." She had the best time watching them walk away laughing and practicing their new word.

Before leaving, Sister Triona invited us to tea, where we had a lovely visit and even got to meet the head of the school. I can't thank them enough for their gracious hospitality.

Our next stop was Bellew's Bridge, on the way to another castle. Out in the country in the middle of a pasture, Castle Roche was owned by my family for a couple hundred years. I was surprised once again at how fast my Mom climbed the hill to see those old ruins, smiling all the way. We had the whole place to ourselves, and the view was tremendous. We then drove to the rest of the sites on my list, giving us more photos, and more memories. Then at last it was time to see that castle.

Meeting the Lord and Lady of the estate was formal at first, but quickly turned familiar. After a tour of the building we were taken to their real pride and joy, the garden. Over lunch I got a first-hand account of some of the history of Ireland, and hearing it from a relative transformed me. They not only live where it happened 400 years ago, but have family stories filled with details you never learn in school. History was no longer the academic exercise of my youth. It became relevant in a way it never had before.

I thought I knew what to expect on this trip, and I was wrong. But I learned. I learned that a pint of Guinness really does go with Irish music, the two linked together on some deep level I simply cannot explain. I learned that a library can be a Cathedral in its own right, and that the sound of Evensong brings a church to life in a way no tour guide ever can. I learned that nothing can top an Irish B&B for hospitality, and that Dingle pubs are welcoming and patient with a stranger who wants to sit in on a session. I learned that there really is power in a stone circle, and that in the early morning mist, the storm beach at Minard Castle has a surreal quality that seeps into your soul, like you've stepped into a dream. And I learned to just stand still and soak in the view, because you can't put Dingle on a post card.

When planning a trip to Ireland, the biggest problem is not deciding what to see, but what to leave out. Now I know that nothing is truly left out, only put off for another time. And since I've been home I found two more ancestors, so Galway and County Tyrone have been added to my list. But then again, whenever I think of going back, I can hear a pub in Dingle calling my name…