Explore some of Ireland's best walking routes with the Donegal Camino

The Donegal Camino, a new annual charity event in Co Donegal, is the perfect way to explore some of the most majestic unexplored walking routes in Ireland. 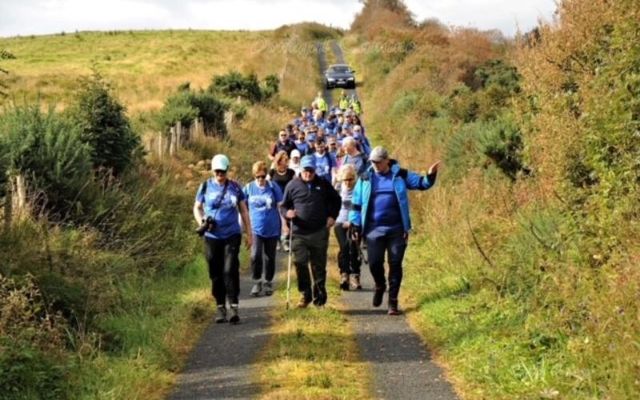 The Donegal Camino, drawing inspiration from the Camino de Santiago in northwest Spain, is a series of breathtaking walks along the Wild Atlantic Way taking place in early September every year.

The Donegal Camino was founded in 2020 by Donegal native Peggy Stringer, who sought to raise money for Cancer Care West after a close friend was diagnosed with cancer.

Unable to travel to Galicia to undertake the traditional pilgrimage, Stringer decided to bring the Camino to Donegal, showcasing some of the county's spectacular walking routes.

What was initially conceived as a solo venture quickly grew into something far bigger and the 2021 Donegal Camino attracted dozens of people, raising a whopping €26,000 for Cancer Care West.

This year's Donegal Camino was bigger still, with some walks drawing crowds of more than 80 people. The seven-day event also raised a staggering €50,000 for the charity, almost doubling the impressive figure of 12 months previous.

Organizers of the Donegal Camino endeavor to include a loop walk, bog walk, mountain walk, beach walk, and an island visit in every Donegal Camino, although the routes change from year to year.

Every Donegal Camino begins in the north of the county before heading south toward Donegal Town, with every Camino culminating in a walk to the summit of the majestic Sliabh Liag (Slieve League) sea cliffs.

Sliabh Liag is simply jaw-dropping; there is no other way to adequately describe it. 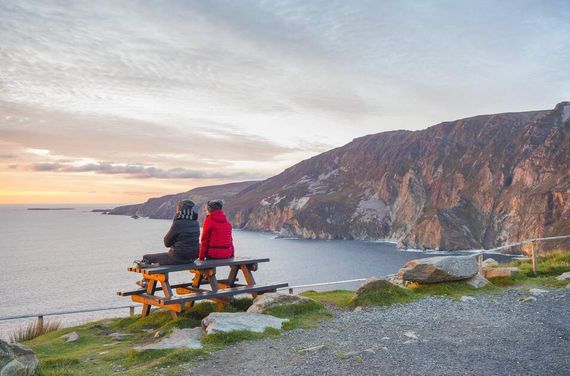 The sea cliffs, which are the highest in Europe, are a relatively untapped tourist landmark compared to the Cliffs of Moher in Co Clare. However, that only adds to the visitor experience.

Standing at 601 meters above sea level, Sliabh Liag is unlike any natural landmark in Ireland. In fact, the view is so good on a clear day that it almost looks too good to be true, as though every rock, every jagged cliff face has been placed there deliberately.

If visibility is good, as it was on the final day of the 2022 Donegal Camino, the summit of Sliabh Liag offers views of the Sligo coastline and the Darty Mountain Range, including the stunning flat-top mountain Ben Bulben.

Like most of the walks on the seven-day Camino, Sliabh Liag requires a moderate level of fitness, but it is more than worth the effort.

The final 100 meters of the walk feature a daunting crossing of "One Man's Pass", a narrow walking trail between two peaks atop the cliffs. Locals joke that if hikers fall to the left while crossing the pass, "they'll drown", while if they fall to the right, "they'll be 'kilt'".

In reality, the pass is far wider than the name suggests and hikers walking in opposite directions are able to pass each other with room to spare, but the name and the local jokes are enough to put some people off.

If one is brave enough to cross the trail, the payoff is simply incredible.

Hikers are rewarded with a stunning view of the cliffs below, while a piece of flat stone jutting out over the cliff's edge - known locally as the "diving board - offers the perfect vantage point for photographs. 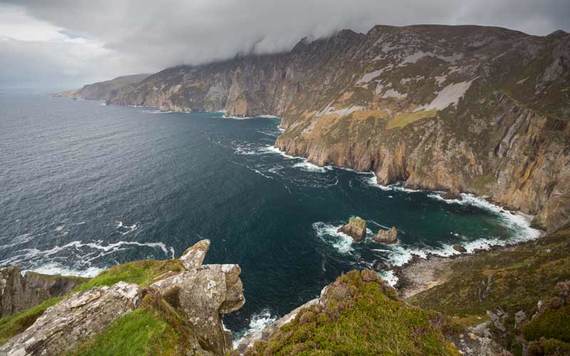 Local walking guide John McGroary led the hike to the top of Sliabh Liag, stopping at various points to explain the history and geography of the area.

An expert walking guide and an excellent storyteller, McGroary also led a number of other hikes on the seven-day Donegal Camino, including a majestic walk through the Bluestack Mountains on the penultimate day.

What sets the Donegal Camino apart from a standard walking holiday, however, is the people.

The Donegal Camino attracts people from all walks of life, from hiking enthusiasts traveling on their own to groups of American tourists hoping to reconnect with their ancestral homeland.

Naturally, the majority of participants are Donegal natives, but there is also a sizeable number of out-of-town visitors that make the trek to Ireland's northwest in early September. 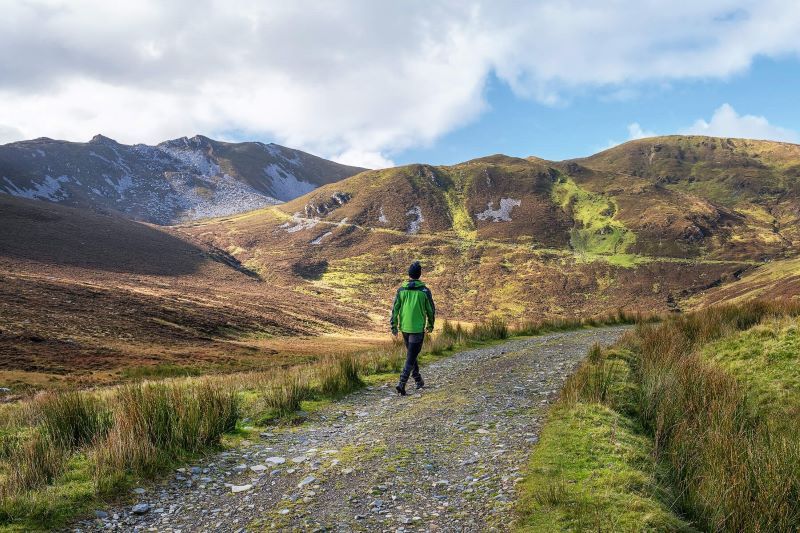 Joining the Donegal Camino four days after it began, it was amazing to see a group of people who had been strangers a week earlier acting like they were close friends.

Because the walks are long (averaging about 15km or six hours every day), it is only natural that people will talk to other hikers to help pass the time, while there is also a certain bond created between people taking part in a charity venture.

Donegal stalwarts Deirdre McGlone and Noel Cunningham, who helped organize the Camino alongside Peggy Stringer and Noreen D'Arcy, also ensure that anyone taking part in the seven-day event is made to feel welcome. 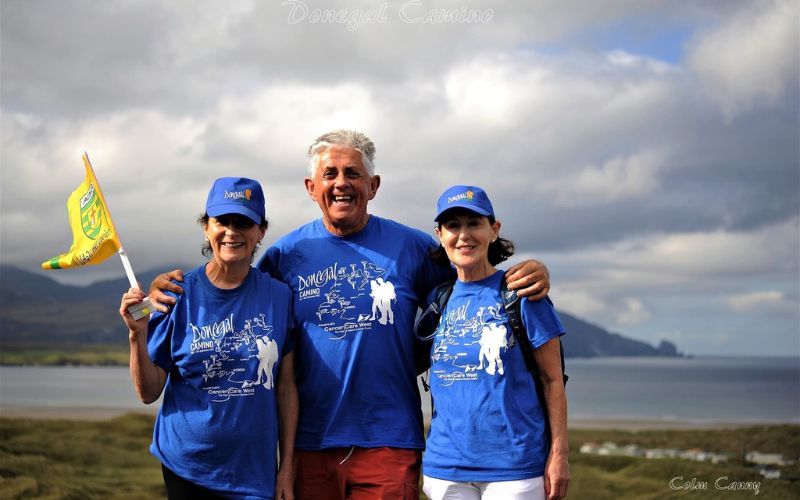 The result is that the nights are just as entertaining as the walks themselves. Every night, walkers gather in a local Donegal eatery, such as Biddy's O'Barnes, a traditional Irish pub located outside Donegal Town, or the fabulous Anderson's Boathouse in Killybegs, before departing for a night of music in a local pub.

This year, the excellent Glasgow musicians Seamus O'Sullivan and Kieran Hepburn provided daily musical entertainment, performing at the end of hikes and providing some after-meal entertainment.

But such is the welcoming environment of the Donegal Camino that the floor is open to anyone brave enough to perform, whether it be a song, a poem, or a story.

Walks were regularly - and refreshingly - interrupted by hikers who wanted to tell a story or sing a song. One walker, for example, read a poem by Yeats; another sang an old American folksong. Rather than disrupting the flow of the hike, these regular intermissions helped to break up the monotony of walking for six hours and, in turn, helped to create a genuine bond between the people taking part.

That is the beauty of the Donegal Camino. It creates a genuine camaraderie between perfect strangers in a way that would be almost impossible in everyday life, all while showcasing some of Ireland's most beautiful walking routes and raising money for an excellent cause.

Anyone wishing to take part in the Donegal Camino is not obliged to undertake every hike across the seven-day event but can come and go as they please, making this Camino accessible for hikers of all levels of experience and for locals with busy work schedules.

Participants are guaranteed to see some jaw-dropping natural landscapes, no matter how many days they decide to take on. Whether it is traipsing across the glorious Inishowen Peninsula in northern Donegal or taking on the rugged Urris Hills, the Donegal Camino will provide an unforgettable hiking experience.

It is only going to grow in the coming years and is, truthfully, one of the best ways to explore some of the more unexplored parts of Ireland. You're almost certain to make some friends along the way too.

You can learn more about this year's Donegal Camino online here.