Donegal Airport has been voted the most scenic airport in the world for the third year in a row. 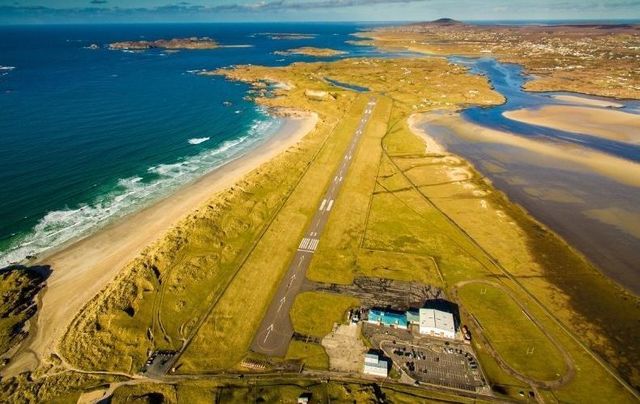 Donegal Airport in the northwest of Ireland along the Wild Atlantic Way has been voted as the most scenic airport in the world for the third time in a row, according to a 2020 survey conducted by PrivateFly.

Located at Carrickfinn, about 15 minutes outside of Dungloe and Gweedore, Donegal Airport (Aerfort Dhún na nGall) has a runway length of 4921 feet and is suitable for small props, small jets, and regional airliners.

In a Facebook post, the management and staff at Donegal Airport said they were delighted to again be named the winner, and thanked everyone for their support.

3 in a row!! Management and staff are delighted to have Donegal Airport as the No1 most scenic airport in the world...

Claiming the top spot, Donegal Airport beat out these other airports:

PrivateFly conducted the survey in September 2020 and shared some of the comments from people who voted for Donegal Airport: "Stunning varied scenery including mountains sea and beautiful beaches in the vicinity of the airport and beyond throughout the whole of county Donegal. Exceptionally friendly and welcoming people to greet you on arrival."

"You can see all the islands, beautiful beaches. Errigal and the Rosses on the approach. Truly wild Atlantic way!!"

"It’s just the most wonderful scenery in the world..."

“In the 1990s, permanent airport terminal buildings were built and the runway was extended, following funding from the Irish Government and other sources.

“The airport is now used by two scheduled airlines and for private charter flights, including helicopters connecting the area's many offshore gas installations to the airport.”