Delta taking off with direct Boston to Dublin flights this summer

Three other airlines already operate the route - but now a fourth has joined the pack. 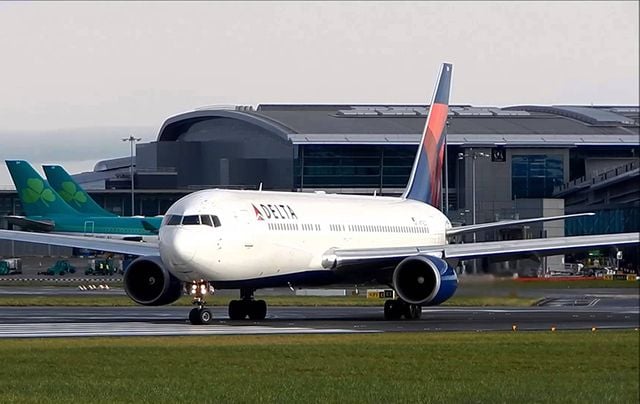 A Delta airplane taking off from Dublin Airport. YouTube

Delta have launched a direct flight service between Boston and Dublin just as the summer begins. The route is currently served by Aer Lingus, KLM and Air France but now customers will have a fourth option to choose from.

The Boston flight is scheduled to depart from Logan airport at 9.10pm daily this summer and the return flight leaves Dublin at 10.15am.

Journey time remains six hours from the US to Ireland and seven hours on the way back and passengers will find themselves flying on board Boeing 757-200s alongside 163 fellow travelers.

To celebrate the new link, staff from America jumped on board the inaugural flight service to Dublin and pitched up at a Dublin’s Holy Spirit National School in Ballymun. The school recently received nearly $6,000 in a grant from the company to help it improve attainment in literacy and science.

“The Partnership is delighted to present this grant with Delta Air Lines in commemoration of their new Boston-Dublin route,” a spokeswoman said on behalf of the company.

“Today we celebrate the rich historical connection between Boston and Ireland by investing in the future of the relationship- Ireland’s youth. We applaud Delta’s commitment to the Dublin community and look forward to working with them to promote mutual exchange between New England and Ireland.”

Read more: US to ban use of computers on flights from Europe