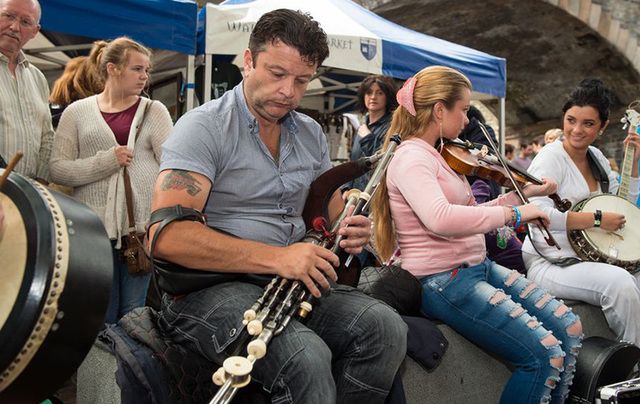 Musicians playing on the street at the Fleadh Cheoil na hEireann. Tourism Ireland

Tourism Ireland has launched a new video to promote the 2017 Fleadh Cheoil na hEireann. This year's Fleadh Cheoil will return to Ennis in County Clare during August for the annual traditional Irish music festival.

The Fleadh Cheoil, meaning ‘festival of music’, is the premier showcase for Ireland’s traditional arts and is run by Comhaltas Ceoltóirí Éireann (CCÉ), the Society of the Musicians of Ireland. This annual event highlights the country's most talented traditional Irish dancers, musicians and singers across various competitions over nine days.

This new video from Tourism Ireland captures some of the magic from the 2016 Fleadh Cheoil which was also held in Ennis. The aim of the short film is to promote the growing festival and share it with a global audience.

Each year thousands of young amateur performers gather to decide All-Ireland champions across 180 different categories for different age groups in the various disciplines of Irish dancing, music and singing. The festival also includes street performances, films, seminars and markets, while people can also take in the surroundings on historical tours.

In 2016, an estimated 400,000 people experienced the Fleadh Cheoil in Ennis over the nine day festival, making it the largest one to take place in the south of Ireland. Tourism Ireland hopes, “The film captures the atmosphere of this great music festival, encouraging potential visitors around the world to come and find out more about Ireland’s incredible culture and sample the Fleadh Cheoil for themselves.”

The inaugural Fleadh Cheoil took place in 1951 in Mullingar, County Westmeath. Since then this annual festival has been bringing communities together, allowing both young and old to share their love for Ireland’s traditional arts. The 2017 Fleadh Cheoil na hEireann will take place in Ennis, County Clare between August 13 - 21.

Read more: How well do you know the lyrics to “The Fields of Athenry”?