Myths and legends of the Cliffs of Moher are incredible as the scenery. Getty

The Irish myths and legends about County Clare's Cliffs of Moher and second to none.

The Cliffs of Moher in Co Clare are one the most popular tourist attractions to visit in Ireland but what you might not know is that they are steeped in tales of ancient Irish myth and tradition.

There’s no surprise that an odd bunch of tall tales surrounds the Cliffs of Moher. The cliffs’ jarring beauty has inspired legends ranging from underwater mythical cities to a witch falling in love with Cu Chulainn.

Here are summaries of five of the most popular stories.

The Legend of the Hag and Cú Chulainn

A witch named Mal fell deeply in love with Cú Chulainn, the legendary member of the Red Branch, the warrior band of the High King of Ulster. Unfortunately for the Hag, Cú Chulainn did not return her love. Mal would not be denied and began chasing Cú Chulainn all about Ireland.

Cú Chulainn ended up south of the Cliffs of Moher, on the mouth of the Shannon River. Cú Chulainn leaped to the island known as Diarmuid and Grainne’s Rock.

Mal continued the chase and luckily was carried by a gust of wind as she leaped for the island. Cú Chulainn quickly leaped back and Mal, with the false confidence from the last jump, leaped again but fell short without the help of wind. Mal crashed into the rocks and her blood reddened the bay giving some cause to assert that Malbay was surely named after her.

The rocks, now named Hag’s Head, was said to take the shape of Mal’s profile and remains visible to this day.

The Mermaid of Moher

A local man was fishing at the Cliffs of Moher and noticed a mermaid.

He struck up a conversation with her but soon set his sights on her magic cloak. As the two talked, the man grabbed the cloak and ran to his house.

Needing the cloak to make her return to the sea, the mermaid followed the man back to his house but couldn’t find the cloak for it was well hidden. With little options left, the mermaid agreed to marry the man and the two would soon have a son and daughter together. However, the mermaid would not forget her magic cloak.

Years later, while the man was out fishing, the mermaid found her cloak, left for the sea, and the man, nor their kids ever saw her again. 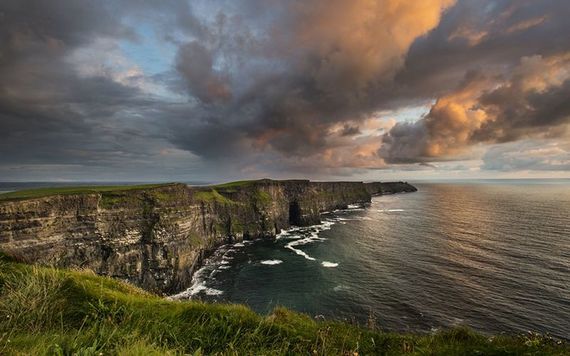 Stormy skies above the Cliffs of Moher.

The Cliffs of Moher are situated in the parish of Kilmacreehy which is named after the Irish saint Macreehy.

Legend has it that Macreehy killed quite the eel. The eel is said to have ventured into the cemetery just beyond the village of Liscannor to feed on the corpses.

Macreehy, seeking to protect his fallen friends, killed the eel.

Two stones of the cliffs, only visible during low tide, are said to mark the saint's bed. A carving of the eel appeared on a stone in Kimacreehy for generations until it recently completed faded.

The Lost City of Kilstiffen

The city sank when the chieftain lost the golden key that opened the castle doors. The city is said to remain underwater until the key is returned, which has yet to happen.

Magical sunset at the Cliffs of Moher.

Some say the key lays under the ogam-inscribed gravestone on Slieve Callan, east of Milltown Malbay while others claimed the key was in a lake on top of a mountain.

Many have claimed to see the city shining below the surface while others say the city rises every seven years.

The legend has it that if someone witnesses the city above water they will die before it rises again in seven years. Within the reef of Lisacannor Bay, there are submerged forests and bogs, which many believe to be the basis for this legend.

The Leap of the Foals

Taking in the ancient sites - The Cliffs of Moher, County Clare.

They galloped to Kilcornan where they took refuge in the caves for centuries.

Finally, seven foals emerged from the caves but, having been in the darkness for years, were immediately spooked by the sunlight. They galloped along the edge of the cliffs and eventually plummeted to their death. The same spot where the fell is today known as Aill Na Searrach, or The Cliff of the Foals.

What legends have you heard surrounding the Cliffs of Moher? Have you ever visited the cliffs themselves? Share your thoughts in the comment section, below.

Want more stories on the Cliffs of Moher? You can find them all on our topic page here.

Myths and legends of the Cliffs of Moher are incredible as the scenery. Getty