The best way to get away from it all? A Wild Atlantic Way road trip 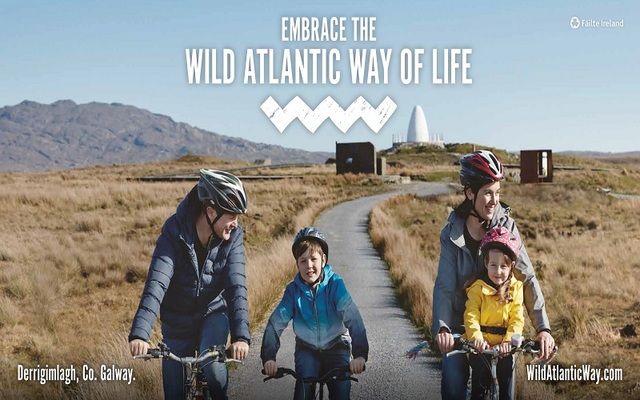 Fáilte Ireland has launched their latest campaign encouraging domestic holidaymakers to get out and experience the Wild Atlantic Way.

‘Embrace the Wild Atlantic Way of Life’ is the latest campaign from Ireland’s national tourism development authority who hope that this new advertising initiative will encourage Irish people to embrace the rugged landscape around them and enjoy the wonderful attractions right on their doorstep.

The new ad is expected to run throughout May, as well as September and October. Fáilte Ireland will take advantage of all major media platforms when launching this new campaign to reach as wide an audience as possible.

Over the past number of years the Wild Atlantic Way has been aimed towards international travelers as a way of promoting our country to a wider audience and increase tourism revenue. Now Fáilte Ireland hope to capitalize on its success and encourage Irish people to plan an exotic holiday without having to leave the country.

Fáilte Ireland CEO Paul Kelly hopes that this campaign can encourage Irish people to have domestic holidays which will help to sustain tourism sector in Ireland throughout the year. “The domestic market provides a bed-rock for many tourism businesses and sustains activity in the sector throughout the year.

“Our home holiday marketing activity is especially geared to generate business in the ‘shoulder seasons’ each side of summer to allow tourism operators trade longer which is good for jobs and also important in terms of developing and maintaining a strong product on the ground for all tourists – whether domestic or international.

”Footage and photographs for the campaign were shot on location at some of the most popular destinations on the Wild Atlantic Way route such as Mullaghmore (Co. Sligo), Keem, Achill (Co. Mayo), Ballinskelligs (Co Kerry), Derrigimlagh (Co. Galway), Fanad Lighthouse (Co. Donegal) and the Cliffs of Moher (Co Clare).

The Minister of State for Tourism, Patrick O’Donovan TD, has welcomed this new campaign and sees it as an opportunity to rejuvenate domestic tourism in Ireland. “While many overseas visitors are discovering the joys of the Wild Atlantic Way, the route has also been incredibly popular with the domestic audience.

“The west coast brand has helped rejuvenate many tourism businesses and communities along its route and is driving incremental growth in visitors and revenue. I am pleased to see Fáilte Ireland leveraging this domestic appeal to maintain business momentum beyond the high season with targeted advertising in spring and autumn and would encourage anybody who has not had the experience yet to get out there and discover the west.”

In 2016 there were 4.8 million holiday/leisure trips taken by people within Ireland, which was up 3.7% compared to 2015. This accounted for an expenditure of €1.12 billion on domestic holidays, a 5% increase on the previous year.

The Wild Atlantic Way is one of the world’s longest defined coastal routes and has been a huge success since the 2,500km touring route officially opened in 2014. In the past number of years Ireland’s tourism sector has seen a major increase in visitors and revenue, both internationally and domestic.

Have you sampled the Wild Atlantic Way? What was your experience like?