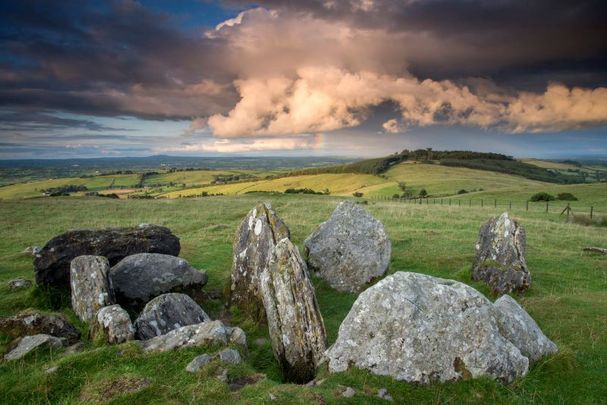 Witness the magic of Ireland's ancient sites during the Atumnal Equinox.

Editor’s Note: Today, September 22, 2022, is the autumnal (or fall) equinox, the day when the sun crosses the celestial equator and the earth has the same amount of daylight as darkness. For the ancient Irish, this day was sacred, celebrated with the symbol of the cornucopia as all the harvest is collected and the stocks for winter – it is hoped – will be plentiful.

Over 5,000 years ago, before the Pyramids in Giza in Eygpt, the ancient Irish had built structures, such as Carnbane West, Carnbane East, and Patrickstown, Loughcrew, all of which have been found to align with the rising sun of the spring and autumn equinoxes. Fascinating.

Situated over three hilltops, Carnbane West, Carnbane East, and Patrickstown, Loughcrew in Co Meath (Loch Craobh in Irish), is a cluster of twenty-five passage tombs dating to approximately 4000BC. Thought to have been built by a community of Neolithic farmers, these structures have been found to align with the rising sun of the spring and autumn equinoxes.

Loughcrew actually falls into the same category of importance, in terms of Irish archaeological sites, like the more famous Brú na Boinne (Newgrange), Carrowkeel, and Carrowmore. The mounds mostly consist of long, narrow passages ending in a set of chambers, forming a cruciform shape. These have then been covered over with stones, thus creating the familiar domed cairn. 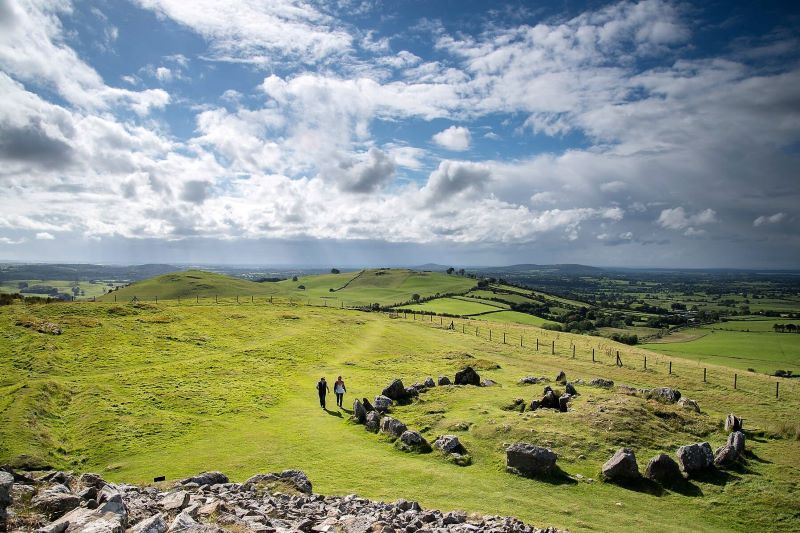 During the summer months, the main central cairn (cairn T, also known as the 'Hag's Cairn') on Carnbane East is open, and there is a guide waiting to show you around, free of charge. In the winter, the cairn is locked, but you can collect the key from the cafe at nearby Loughcrew Gardens (leaving a deposit against its return), and have your own private viewing. Usually, there is no one else around in the winter, so you can stay as long as you like, admiring the inner carvings which look as fresh and sharp as if they were only chiseled yesterday.

Cairn L on Carnbane West, arguably the most spectacular of the cairns, is privately owned and not open to public viewing. Cairn L is spectacular and unique because it contains a limestone pillar, or standing stone, which is lit up by the rising sun entering the chamber.

There are many carvings in the chambers of Cairn T. In particular, those on the back wall of the rear chamber look like flowers and leaves, or stars. Of course, these carvings look quite random to us, but it's interesting that on the equinox, the beam of light starts in the top left symbol, and traverses across the stone panel over the course of an hour, finishing at the bottom right symbol, which looks extraordinarily like the sun.

Another name for Loughcrew is Sliabh na Caillaigh, which means 'Mountain of the Hag.' Local folklore tells of a hag, or witch, leaping from hill top to hill top carrying stones in her apron. As she did so, some of the stones fell from her apron and landed on the hills below, thus forming the cairns of Loughcrew. 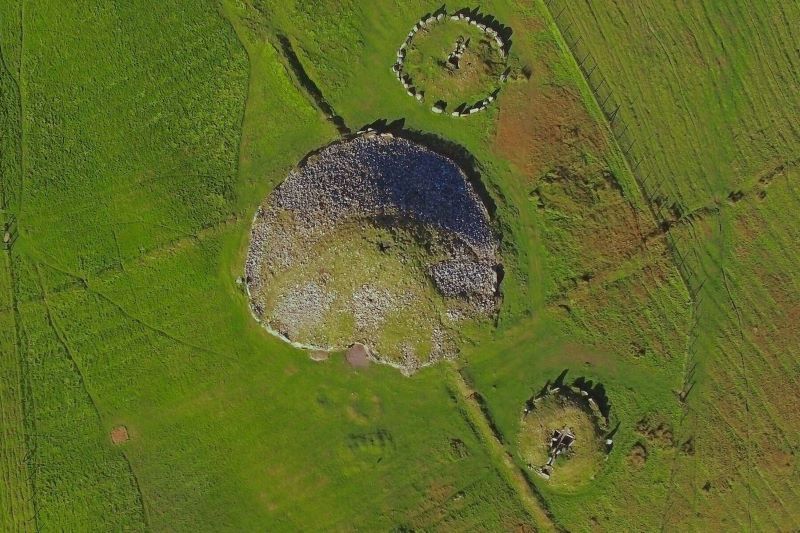 On September 23 in 2016, I visited Loughcrew to greet the dawn of the autumn equinox. It was still pitch black when I left the house, and I was glad to see the stars shining bright and clear. It meant there would be a good chance of seeing the sunrise.

There was just enough tremulous starlight to guide my way up the hill. I couldn't help feeling that by following in the footsteps of our distant ancestors I was enacting some kind of ancient ritual, winding my way through the still velvety darkness as they would have done, perhaps earning the right to be there by participating in that steep, breathless climb at such an early hour of the day.

Meanwhile, the faint stain of dawn was already caressing the horizon in the east.

Although the tiny car park was full, I wasn't prepared for the number of people waiting in anticipation as I rounded the stony bulk of cairn T. They were queuing all the way around it, and the hum of their chatter and laughter seemed loud after the silence of the climb.

There were people everywhere: photographers with huge cameras on tripods, dogs on leads, children running, men climbing on top of the cairn, even people on horses. Above our heads, a remote-controlled device flew and hovered, buzzing noisily and flashing red and green lights; it probably contained a camera. 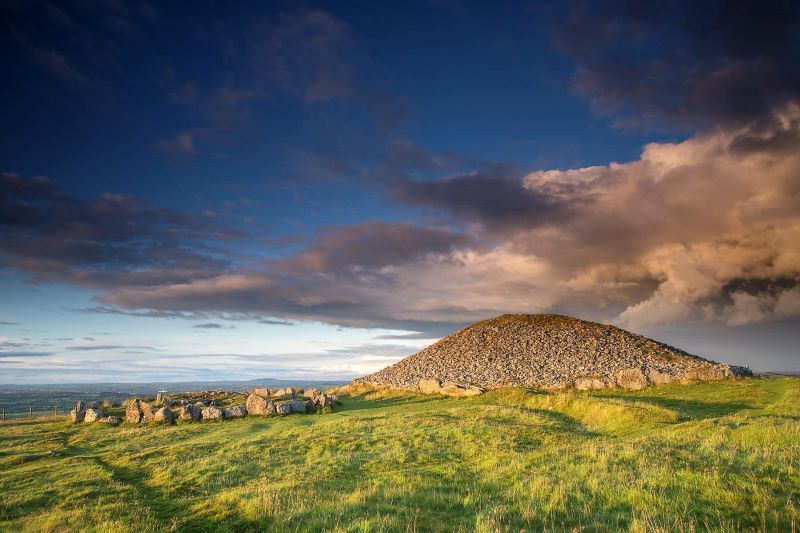 As the sky lit up, a pagan group began their ceremony, chanting and singing, and beating on a bodhran. It was very atmospheric, with the stony humpback of the cairn brooding in the darkness behind them, and the sun washing the sky with gold, lilac, and pink before them.

The feeling of anticipation was intense. Everyone was waiting for that special moment when the sun finally broke through and cast its rays like long fingers stealing over the land and into the entrance of the cairn.

The sun rose but hid her face stubbornly behind a thin veil of cloud that refused to budge. Still, people waited. I suspected that if there was even a hint of a sunbeam, there would be a mad rush to try and get into the cairn chamber, and I did not want to be a part of that. The cairn was open, so I asked the Office of Public Works staff if I could go in.

Inside, it was dark and empty, save for one huge spider. I shone the light from my phone on the familiar symbols, tracing their sharp outlines with my fingers. There was no indication of the crowd and chaos which waited outside. It was silent and peaceful. This was where the magic happened, in the dark quiet solitude, surrounded only by the stones, the symbols, and the ghosts of our ancestors.

It was clear that there would be no mystic sunbeam entering Loughcrew on this occasion. Others followed me in, so I paid my respects and began the trek downhill. I could come back another time. If the cairn was closed, I could even get the key. This is Ireland, after all. We don't fence our monuments off and forbid people to touch and experience them.

These stones were put together by mankind for the benefit of mankind. We may not know how, or why, but we know it took great effort and commitment to do so. I wonder if those Neolithic builders ever imagined that thousands of years in the future, their structures would still be standing, and people would still be climbing the hill to view the equinoxes from them.

You can take a look at a previous autumnal equinox at Loughcrew here: