Tips for traveling to Ireland with kids

Whether you’re traveling with infants, toddlers, tweens, or teens, traveling to Ireland with kids can be the family vacation of a lifetime. 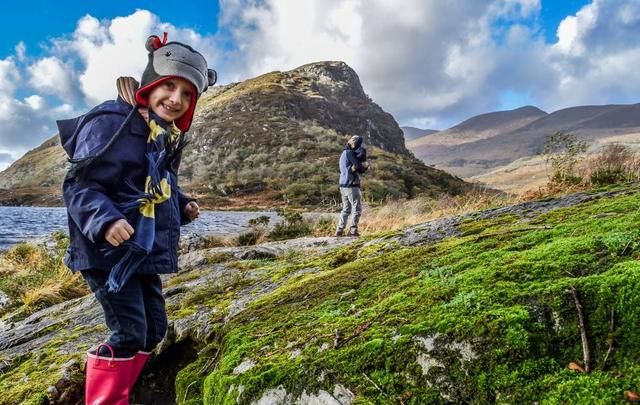 Whether you’re traveling with infants, toddlers, tweens, or teens, traveling to Ireland with kids can be the family vacation of a lifetime. iStock

Family vacations in Ireland can make traveling with kids a breeze.

While traveling across an ocean with your kids may seem like it could create more stress than it’s worth, the cheap flights available, the wealth of history and culture, and the multitude of amazing attractions that are perfectly family-friendly, make Ireland a magical playground for children of all ages.

If you want to take the plunge and go on your dream family vacation to Ireland, here are IrishCentral’s top tips for traveling to Ireland with kids!

How to pack for your kids in Ireland:

Wrap your kids up well with a good raincoat and boots in Ireland. Image credit: iStock.

Don’t let the rain stop your little ones from exploring the land of castles and fairies! There is no way to avoid the rain in Ireland and no such thing as staying inside and waiting for it to pass over because there’s a high possibility that you could be waiting for a full day, or two, or even longer.

While it will, of course, put a dampener on the trip if any of the kids were to get sick, investing in a great raincoat, big fleece jackets, good waterproof walking boots, and plenty of large warm fluffy socks will keep everyone on the go come rain or shine without running the risk of catching a cold.

How to fly to Ireland with kids:

Flying to Ireland with kids doesn't have to be stressful. Image credit: iStock.

Flying to and from Ireland can take anywhere from 5 and a half to seven hours if you’re flying from the US east coast to Dublin. Adding on another three hours of airport time and some travel time from the airport on the other side, Ireland is still closer than you may think and by flying on many of the current overnight flight options available, you can tuck the kids in for the night and wake them up once they land in a whole other country.

With flights from the likes of Norwegian Air not offering the same in-flight entertainment options, be sure to have a charged iPad or a great book or coloring book to keep the kids entertained while traveling.

How to travel around Ireland with kids:

A car is the best way to travel Ireland with kids. Image credit: iStock.

While traveling around via public transport or with a bus tour is an option, the only real way to travel Ireland with kids is to rent a car and brave driving on the opposite side of the road.

With the option to pack your own picnic lunch for the journey, space to shelter from the rain if it begins to lash down, and a base to eat your ice creams in comfort after changing out of your swimming gear on the beach, a car can become your second home in Ireland, allowing you to work to your own schedule, take as many unplanned stops as you need to, and leaving you in control of where to head next.

While we’re sure that your kids will enjoy looking out the window at all the new animals and amazing countryside and castles, one of my own favorite memories of an early trip around Ireland is having my own little scrapbook where I could write notes and draw pictures of the favorite things I saw.

For certain counties, there are also options such as Cultural Roadmapp, a hands-free, GPS-enabled audio tour app for motorists which will talk the whole family through the sights and sounds as you drive around. If the app isn’t available in the county you’re currently driving through, audio books of Irish history can keep the whole family entertained or your kids can learn about the history of the country around them by reading a novel or two from Irish authors during long journeys. A great favorite among many young Irish readers is the Under The Hawthorn Tree series by Marita Conlon McKenna which chronicles the lives of three orphaned siblings battling to survive the Irish famine.

Just be warned that gas is more expensive in Ireland, so picking a car that just fits the space you need will help you save on costs.

Where are the best places to take your kids in Ireland? Image credit: iStock.

There is a multitude of sights and attractions around Ireland that kids will love but here are some of the best to make traveling to Ireland with kids something to really remember.

If you’ve little people to entertain then don a Viking hat and hop on the Viking Splash tour for a wild ride through Dublin on a World War II amphibious vehicle. Don’t worry it’s all safe and life jackets are provided. They’re even encouraged to shout at passersby and pretend to be a real-life Viking which provides hilarity for all as unsuspecting pedestrians are suddenly met with a massive yellow boat-like vehicle holding tens of roaring passengers.

One of the most unique ways to see Dublin, you'll see all the main sights of Ireland’s capital by land and by water while learning all about the influence the Vikings had in Dublin.

Kids watching the animals up close and personal in Fota Wildlife Park.

Visited by almost 440,000 people annually, Fota Wildlife Park consists of 100 acres of parkland where animals such as the kangaroo, emu, European bison, zebra, giraffe, and ostrich can roam freely.

First opened in 1983 on Fota Island, six miles east of Cork City, the Park is located on part of what was the estate of the Smith-Barry family for nearly 800 years and is the second largest visitor attraction in Ireland outside of Leinster.

The ideal family attraction, the park can be explored on foot, taking in the animals as you go along, or by the safari train. From the roar of the lions to the acrobatics of the monkeys, Fota will wow young animal lovers and rightfully earned its place in the Top 25 Zoos/Animal Parks in Europe in the 2015 Tripadvisor Travellers Choice Awards.

Just some of the attractions in Tayto Park & Zoo.

For those of you not familiar with the Irish classic that are Tayto crisps (as in potato chips), we’d greatly recommend getting your hands on some and making yourself the best crisp sandwich you’ll ever have.

Such is the popularity of the brand of chips in Ireland that it has its very own theme park and zoo honoring the Irish classic and their legendary mascot, Mr. Tayto.

With everything from tigers and bison to scaly reptiles and bald eagles, it quickly became a firm favorite for family days out while the theme park attracted the thrill seeker in us all.

The most exciting thing about the park, however, is that it is also home to one of Ireland’s most epic roller-coasters and Europe’s largest wooden roller-coaster, the Cú Chulainn Coaster, named after the famous Irish mythology figure. Not for the faint-hearted, we’d leave eating the packets of Tayto until after you’ve braved its dizzying heights of 32.05 meters and 31 meter plunges, all at speeds of up to 62 miles per hour.

Opened last June 2015, the rollercoaster tosses and turns along for 1,400 meters. That’s the equivalent of 8,255 Tayto crisp packets laid out end-to-end. Featuring 14 turns and plenty of air-time, the coaster races through its course in just over a minute.

Tayto Park officially opened in 2010 and since then has expanded enormously with the arrival of eight new attractions including “Air Race”, the “Rotator,” the “Sky Tower” and  Ireland’s only 5d cinema.

While the National Aquatic Center is popular with Irish visitors, there’s no reason why those traveling from further afield cannot take advantage of the fun. If you’ve spent a good few days traveling around the country and are in need of a break from the hiking and bus tours, the indoor aquatics facility in Dublin will be sure to offer a welcome reprieve.

If the rain is just a little too heavy for you to venture out and explore, drop in and take advantage of the water slide and massive family-friendly pools that will help stretch out the legs after all those hours spent in the car.

Where to stay with kids in Ireland:

You can rent houses with your kids in Ireland that will have you right on the beach. Image credit: iStock.

While you can find plenty of family friendly hotels in Ireland, Bed and Breakfast (B&Bs) are some of your best options once you leave the cities. Offering you a room for the night and a full Irish breakfast the next morning, you can fill yourself up for the day while staying in a genuine Irish house and taking advantage of the wealth of knowledge the owners will have about the local area.

If staying in one place for a week or more, renting a whole house out for the week can be a very cost-effective option which will allow you to come and go when you please, cook your own meals, and have space to prep for the day ahead. You’ll also have more space to unpack and settle down for the week and get a feel for rural life in Ireland.

Where to eat with kids in Ireland:

Or the kids can attempt to catch their own dinner in Ireland! Image credit: iStock.

If you have some fussy eaters, much of the fast food options available in the US can also be found in many Irish towns with the addition of Irish favorite Supermacs. Many Irish towns will have at least one major supermarket chain (Supervalu, Tesco, Lidl, Aldi, and Dunnes Stores being the most prominent) where you should be able to find everything you need from fresh veg to dry goods. Smaller chains such as Centra and Spar also sell a wide range of foods and can be found even in Irish villages if you plan on cooking a lot for yourself.

The vast majority of Irish pubs will have some kind of menu and are a great choice if you've spent a day out hiking or on tours. Kids are legally allowed to be in pubs until 9 pm (kids aged between 15 and 17 are even allowed to be there unaccompanied) and most pubs will have a bar section and a lounge section where food will mainly be served.

Serving Irish traditional meals from bacon and cabbage to a Sunday roast, options such as a lasagna, wraps, sandwiches, burgers and fish and chips are standard in most Irish pubs.

A homemade bowl of soup with some thick slices of soda bread is sure to go down a treat at any time of the day!

Have you traveled to Ireland with kids? Were you still a child when you made your first visit? Let us know about your own tips and experiences in the comments section, below.