Lynnette Wukie is the first-ever female to serve as the iconic Leprechaun mascot at the University of Notre Dame. 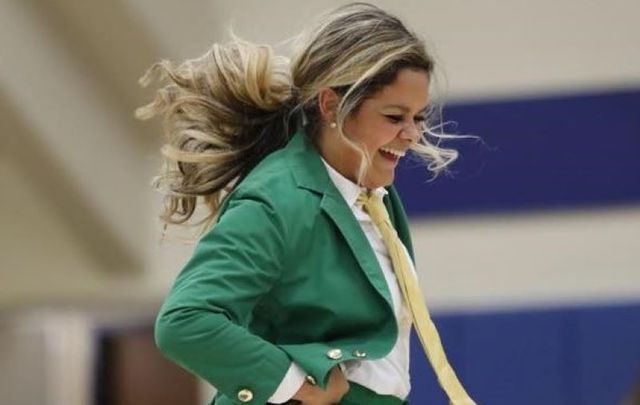 Lynnette Wukie says: “Who says the Fighting Irish can’t fight like a girl?”

Lynnette Wukie has become the first-ever female to serve as the University of Notre Dame's iconic Leprechaun mascot.

Wukie joins fellow students Conal Fagan and Samuel Jackson to create the trio of Leprechaun mascots who will cheer on The Fighting Irish for the 2019 - 2020 school year.

Fagan, a native of Co Derry in Northern Ireland, is the first native-born Irish person to ever fill the role. Wukie and Jackson are only the second and third African Americans to be Leprechauns, a role that has existed at the Indiana university since 1965.

It was actually Fagan, who returns as a Leprechaun for the second time this year, who convinced Wukie to try out for the mascot role last spring. Each Leprechaun hopeful had to pen an essay and submit a video to be considered for tryouts.

In her video, Wukie asked, “Who said the Fighting Irish can’t fight like a girl?”

Wukie told Good Morning America that during her tryouts, "One of the [judges] said it never crossed her mind that a leprechaun could be female and she apologized because she said it should have.

"I told her not to apologize because I didn’t think of it either. It was one of those things where that’s how it’s always been and that’s how we always thought it would be, but here we are.”

Ultimately, Wukie, a former high school cheerleader who is attending Notre Dame on a golf scholarship, nabbed the role alongside Fagan and Jackson from five contestants. (Notre Dame Magazine notes that due to increased demand, there are three Leprechaun mascots for this school year: Green, Blue, and Gold.)

So proud to represent the greatest university as their first female leprechaun #GoIrish https://t.co/OlOncqK1sl

Speaking with Purpose2Play, Wukie said: “Our Leprechaun trio continues to show everyone how special ‘different’ can be.

“You make your own path, and staying in any kind of box is your choice, and often boring. We want to show everyone that you should be proud of who you are and ignore any and all stereotypes. You need to pursue your dreams no matter what the people before you have done or what qualities they possessed.”

Speaking with Good Morning America, Wukie explained how she’s adapting the beloved Leprechaun mascot for a female: "We have done our best to keep the tradition but adapt it to me being female," she said. "I still have a suit, but the pants are cuffed instead of cinched and both the coat and the vest are shorter so it’s more of how a women’s suit would look.

"I wear an ascot type scarf, but I can also wear the tie if I want, it’s my choice.”

She added: “I think it’s something that’s natural with anything like this, when there’s a first, especially with gender, that something will come up. Also being a woman of color, I feared there would be a lot of controversy, but I’ve heard only positive things both here and back home."

"I hope that having a female leprechaun continues as a tradition," Wukie added. "I hope I won’t be the only one."

Watch Wukie and her to fellow Leprechaun mascots discussing their duties for this school year: