David Shanahan from Castleisland in Co Kerry has committed to playing football at Georgia Tech in the US. 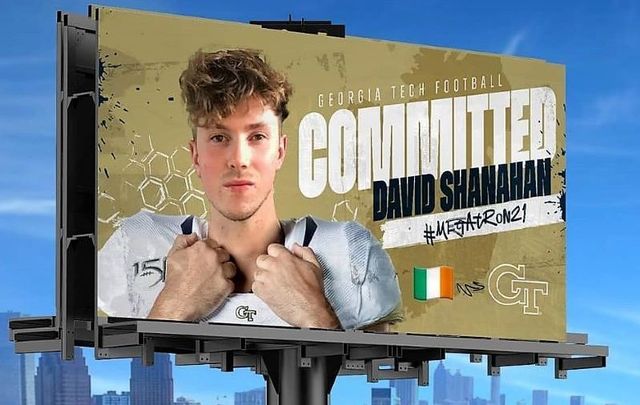 David Shanahan, 19, has successfully pivoted from the GAA to the NCAA

David Shanahan, from Castleisland in Co Kerry, has become the first Irish person to be awarded a full scholarship to play college football in the US.

On May 15, the 19-year-old announced that he has committed to play for the Georgia Tech Yellow Jackets:

Extremely excited to announce that I have been offered and accepted a full scholarship to play football and study at Georgia Tech in 2021. Huge thanks to @CoachCollins @Coach_Conner @PatrickSuddes @CoachPopovich @JohnnyPKA @ProkickAus #4the404 #meGaTron21 pic.twitter.com/1uaK1Rk9ih

In his tweet, Shanahan shared a note that read: "Thank you to Coach Collins, Coach Conner, Coach Popovich, Patrick Suddes and all the Georgia Tech football staff for this amazing opportunity.

"A massive thank you to John Smith and Nathan Chapman of Prokick Australia for all their hard work and dedication to make this all possible. I am so grateful for everything you have done for me.

"Also thanks to Dave Tuinauvai of Conquest Athletic Performance for all his work.

"Finally to my family and friends, especially my mom and dad, I cannot thank you enough for always supporting me.

A talented athlete, Shanahan played Gaelic football, rugby, and basketball while growing up. In 2017, he was part of the Kerry U17 Gaelic football panel which won that year's Munster title.

Shanahan’s local GAA club, the Castleisland Desmonds, congratulated him on the massive achievement:

The Irish Consulate in Atlanta, Georgia also offered their congratulations:

Speaking with Jackets Online, a blog about sports at Georgia Tech, Shanahan said that when he was about 16 years old he wanted to try something new.

Having been "enthralled" with college football, he decided to order a few American footballs online and started practicing at his local Castleisland Desmonds GAA pitch.

“I had literally been kicking my whole life just with a round ball instead of an American football. At the start when I was punting, I really had no idea what I was doing.”

Shanahan said he began studying YouTube videos and filming himself to compare.

As he progressed, he learned about Prokick Australia on Instagram and noticed that they were sending athletes to college in the US. The Irish teen decided they were his best shot at attending college in the US on an athletic scholarship so he reached out to them.

One of the coaches, John Smith, was in Manchester at the time and agreed to fly to Ireland to assess Shanahan.

"After a couple of kicks with Johnny, he told me he thought If I moved to Melbourne and trained with him, Nathan Chapman, and the rest of the Prokick boys, I could get a division one scholarship," Shanahan said.

So after completing his Leaving Cert, Shanahan and his parents, coincidentally, flew to Atlanta, Georgia where he has an aunt living. They stayed there for a few weeks before Shanahan continued on solo to Australia for training.

The training, evidently, paid off. Following a Zoom call with four Georgia Tech coaches and two of his Prokick Australia trainers, Shanahan received an official offer for a full scholarship to be a punter on Georgia Tech's football team.

"I was ecstatic when my coach John Smith told me they offered me. It's a feeling I'll never forget."

Shanahan says he believes the plan as of right now is to enroll at Georgia Tech in January 2021.