Scarred Christmas memory - an accident and no cowgirl suit

A mother's quintessential reaction to a crisis and a little girl's disappointment as Santa fails to deliver a coveted cowgirl outfit. 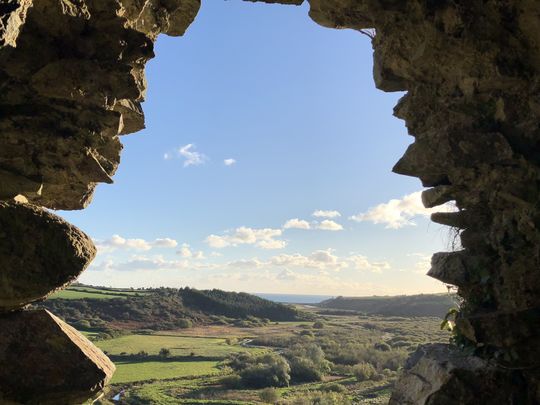 "Why anyone came to my mother in crises remains a mystery like the Blessed Trinity. It was easier to board a fast-moving train than deliver bad news."

I was seven and figured I’d hard-ball Santa to bring a cowgirl suit with a couple of guns to defend myself against my brothers were rumored to be cowboys on Christmas morning. I had begun writing my letter at the kitchen table when Aunt Peggy, the parish priest’s housekeeper, ran like a crazy woman into my mother’s yellow kitchen.

“Sit down Joan, I need to talk to you, Liam was in an accident.” She said.

“He was coming down by the Infirmary to catch the bus and some young fella threw his school bag, it landed in the road.” Peggy mauled her face.

“Sacred Heart of Jesus, Peggy,” my mother thrust like a matador sizing up a defeated bull.

“Tea?” My mother probed—her ritual of avoidance began. For as long as I can remember, my mother had a rare talent to change the topic of any conversation. It fortified her persuasion.

“No, I’m fine, well ok if you’re making one for yourself,” Peggy answered.

“No bother, sit down there Peggy,” my mother said.

“Joan, he went after the school bag and the bus, the double-decker bus…”

"Oh Peggy, how do you like your tea?” My mother reached for the kettle.

“It doesn’t matter, anyway is fine. Joan, the bus, the double-decker went over his leg.”

My mother clenched her Rosary beads to anchor herself.

“He lost a lot of blood, the doctors in the Infirmary said he may lose the leg.”

“Do you want your tea in a mug or a cup?

“A cup is grand Joan, they’re taking him to Cork hospital.”

“That’s great Peggy, because Cork’s the best in the country!”

“Better than Dublin? Is that a fact?” Peggy asked.

“All go in the capital, sure they can’t think straight— Cork doctors are far more relaxed.

"More people left the Mater Hospital in Dublin in worse shape than when they went in.”

To this day, I will never know where my mother got her direct feed of information.

“How’s your tea, would you like a biscuit with it?” She broke open her Christmas box of biscuits.

The neatly packed pink and white marshmallows dusted with coconut looked like mini-space shuttles about to launch into my mouth from small orbs of shortbread. Why anyone came to my mother in crises remains a mystery like the Blessed Trinity. It was easier to board a fast-moving train than deliver bad news.

“I’m grand Joan, Liam’s in God’s hands now.” Peggy settled. Then came the big slip I had been waiting for my whole childhood.

“Joan, what about his Roy Rogers cowboy suit for Christmas? he may lose the leg.”  My mother glared at me, our eyes locked. She knew I wanted a cowgirl outfit more than a stupid doll. This was my chance—Liam may no longer need his suit so I could have his.

“Santa will take care of everything.” My mother said, closing the biscuit box.

Christmas morning rolled around and I watched my brothers feed their red roll of caps into their shiny guns. They’d reload, drop them into their holsters and draw over and over, shooting off their smoldering pistols in my doll’s face. My mother said I should be happy my cousin Liam woke up with his Roy Rogers cowboy suit at the end of his Cork hospital bed. My father slept through the commotion. When he awoke, my revolution was over. For spite, I had eaten all the white coconut cream marshmallows and left the pink marshmallows for my brothers.

The next day, I deliberately abandoned my doll at the end of my street hoping a deserving kid in my poorer neighborhood would steal her. It worked. I pretended to miss her, I even faked a few sissy tears. By New Year’s Eve, my mother had somehow learned the doll’s whereabouts and marched me to a neighbor’s house to get her. The other mother apologized as she pried my stupid doll away from her wailing daughter. I wanted her to have it, but my mother talked up one of her shenanigans about how Santa had read my letter asking for a doll. The whole way home I couldn’t think what I would tell the parish priest at my next confession.