These Irish baby names are becoming super trendy in the US

With names like Nessa, Bartley, and Bradan, the Irish are clearly trendsetters when it comes to baby names! 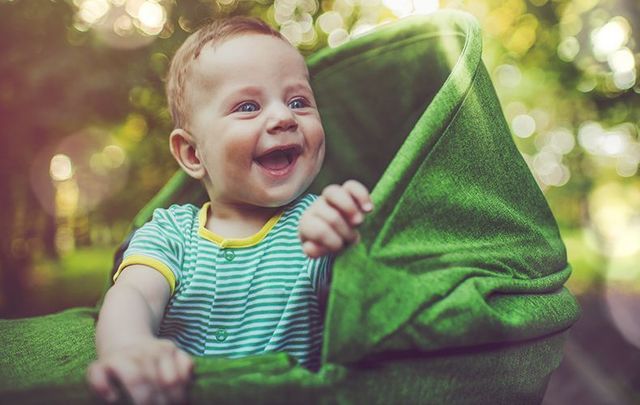 These Irish baby names “are about to take over.” Getty Images

Got a small one on the way? Check out these trendy Irish baby names.

Irish baby names, in our opinion, are always on-trend. But back in 2016, Buzzfeed chose 17 Irish names that they predicted were about to "take over."

Here's a breakdown of the 17 Irish names as chosen by Buzzfeed. What’s certain going through the list is that these names may well indeed "take over," but most likely only in the United States - we reckon it’ll be a long time before you meet a young fella in Carlow town called Tierney, Bartley, or Vaughn!

Quinn is one of the most popular Irish surnames and is to be found in every county in Ireland. The Irish original from which the surname derives is Ó Cuinn, from Conn, a popular personal name, meaning chief or leader.

Originally a Viking name it became popular in Ireland in the 14th century. In Irish history Nessa was the mother of Conor Mac Nessa, king of Ulster. A powerful and beautiful woman, ambitious for her son, she tricked her second husband, Fergus, into giving up his kingdom to his stepson.

Colm means dove in the Irish language. The name may also be an abbreviation of the name Malcolm or Columba.

It is derived from the French name Jeanne, which was introduced into Ireland by the Anglo-Normans in the Middle Ages. Siobhan is the Irish version of the English name Joan, which means “'God is gracious.”

The Greek name is a feminine form of the Greek Iōannēs, which is in turn a shortened form of the Hebrew Johanan, which is where the meaning “God is gracious” comes from.

Read More: These were Ireland’s most popular baby names in 2019

Sinead is the Irish version of the name Jane or Jennifer, derived from the French name Jeanette and the Scottish name Jean. Again this name has its origins in the Hebrew name Johanan and also means "God is gracious."

This names comes the word bradán, meaning salmon. The name is derived from the legend of Bradán Feasa (The Salmon of Knowledge), a tale of the Irish hero Fionn MacCool.

This is the Irish form of the Hebrew name Bartholomew, meaning the Son of Tamai. It is also derived from the name Parthalon, the leaders of the first people believed to have occupied Ireland after the biblical flood of 2800BC. Legend says that he brought agriculture to the land.

Strictly this isn’t an Irish name but has gained popularity lately in the west of Ireland.

Derived from the legendary hero Fionn Mac Cool, a central character in Irish folklore and myth, the name means fair-headed. Fionn was incredibly strong, brave, handsome, generous and wise, a wisdom he acquired by touching the Salmon of Knowledge and then sucking his thumb.

Read More: This Irish name is the most popular name for baby boys in New York

The name means lord or chief and implies that the child lord of the household.

It comes from the 6th-century saint Tierney of Clones. He had the privilege of being baptized by St. Conleth of Kildare with St. Brigid as his godmother. As a young man he was captured by pirates and taken to the English king who placed him in the monastery of Rosnat in England. He later returned to Ireland and became Bishop of Clogher, in County Down.

Meaning dream or vision, Aisling has its origins in the 17th and 18th centuries, in Irish poetry.

The name comes from the Irish clodhna, meaning shapely. In Irish mythology, Clíodhna is a Queen of the Banshees (fairies) of the Tuatha Dé Danann. Cleena of Carrigcleena is the potent banshee that rules as queen over the sidheog (fairy women of the hills) of South Munster.

In some Irish myths Clíodhna is a goddess of love and beauty. She is said to have three brightly colored birds who eat apples from an otherworldly tree and whose sweet song heals the sick. She leaves the otherworldly island of Tir Tairngire ("the land of promise") to be with her mortal lover, Ciabhán, but is taken by a wave as she sleeps due to the music played by a minstrel of Manannan mac Lir in Glandore harbor in County Cork: the tide there is known as Tonn Chlíodhna, "Clíodhna's Wave."

This can be used for a boy or girl. The name comes from the Irish word rí, meaning king and the diminutive – ín. So the name means the king’s child.

Caoimhe, or the Northern Irish Keeva, is derived from the Irish caomh meaning beautiful, gentle or precious.

Killian or Cillian an anglicized version of the Irish name Cillín. Cill meaning "church" in Gaelic while the suffix -ín is used affectionately to indicate a “pet” or diminutive status.

The name is also said to be derived from Saint Kilian, an Irish missionary to Germany in the 7th century, who, according to the Acta Sanctorum, was born in Mullagh, County Cavan.

Ronan is the anglicized version of the name Rónán, meaning little seal (Rón meaning seal and -án being a diminutive suffix). The name comes from the legend of a seal who is warned never to stray too close to the land. When the seal child is swept ashore by a huge wave, she becomes trapped in a human form, known as a Selkie or seal maiden. Although she lives as the wife of a fisherman and bears him children, known as ronans or little seals, she never quite loses her sea-longing. Eventually, she finds the seal-skin which the fisherman has hidden and slips back into the ocean. But she can’t forget her husband and children and can even be seen swimming close to the shore, keeping a watchful eye on them.

Niamh is an old Irish name meaning bright and radiant. In mythology, Niamh was a goddess, the daughter of the god of the sea and one of the queens of Tír na nÓg, the land of eternal youth. She was the lover of the poet-hero Oisín.

This one’s tenuously Irish. Originally a Welsh surname it is used as a form of the Irish surname McMahon. In Welsh it comes from the word bychan, meaning small.

What's your favorite Irish name? Let us know in the comments!