Can you help this trace tales of this incredible Irishman's life from Limerick to New York and Detroit as he made, lost and made his fortune again? Help share his stories with his descendants. 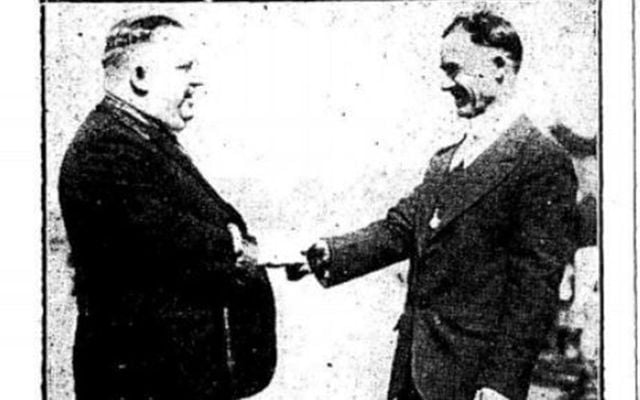 Can you help this IrishCentral contributor trace tales of this incredible Irishman's life from Limerick to New York and Detroit as he made, lost and made his fortune again? Help share his stories with his descendants.

John J Hanley, otherwise known as The Baron Hanley or The Baron of Broadway is my great grand uncle. I grew up hearing stories about him from my father and have been researching and gathering information on him for the past ten years.

His story is proving to be multi-faceted and quite fascinating. As I continue my research, I realize that all of my information to date is centered on Ireland. However, he lived in both New York and in Detroit. So, I am now moving to widen my research to try and piece together some information on his life in America.

Each time I discover a new piece of information another door opens and leads to yet more stories. As he died in 1956, there are still people who remember him personally – including my father and aunt. But I am conscious that as time progresses, I will lose more and more of these personal encounters.

I have a day job, so my research is slow and dependent on my free time. I am hoping that this article will generate some interest and perhaps more information to help build the full story.

John J Hanley was born in the parish of Monagea, Co Limerick, near Newcastle West, circa 1895, and emigrated to New York in the early 1900s. He made and lost and made again his fortune between New York and Detroit. It would seem that, at least for a time, he made it big in America. Certainly, his old Irish sod reaped the benefits of his successes.

My father remembers The Baron Hanley well. Known to him as his grand-uncle – John J Hanley, he visited his mother, Catherine O’Grady Collins and the local parish regularly on his frequent trips to Ireland. Talking with my father and the few locals who still remember him, it is his generosity that is most recalled. That and the big American Cadillacs he brought to Ireland on each trip. A different one on each trip, with a different chauffeur selected from the local community and handsomely paid for the privilege of getting to drive such an ostentatious car in a time and place when few had cars.

Seeking to find out more about my great grand uncle, I discovered a wealth of information online. His antics, grandiosity, and generosity of spirit were well documented in the national and local press in Ireland. But such was his notoriety that his name even made it to the pages of the New York Times among other International press.

Having arrived in New York sometime in the early 1900s, he is said to have made his money working in the hospitality industry. At least at the outset, this was a wholesome endeavor, with him purported to have worked in such fine establishments as The Waldorf Astoria. But his ambition to succeed may have led him down a different path as, in the late 1910s and early 1920s the newspaper archives suggest that he made his money in bootlegging, running a speakeasy on Broadway, called The Broadway Café. There are even articles referencing his role as a landlord, owning at least one building in New York that he rented.

One of his most notorious endeavors was bootlegging. His escapades lead him into the wrong kind of contact with the law in New York, receiving fines of $500 for serving illicit alcohol at the Broadway Café. His notoriety drew attention even than in New York as his café was subject of a thrilling hold up by a group of “automobile bandits” who relieved him of $1400 from the café safe.

John J Hanley "Baron of Broadway" on left of picture.

Such was his news appeal that even false reports of his death reached the Irish national press in June of 1930, by way of a telegram sent from New York to the offices of the Cork Examiner announcing his death at the hands of highway robbers, who held him up at gunpoint. Indeed, this story circulated for a few days in June until the Baron himself saw fit to telegram the national press and advise them of his fit and healthy state.

His frequent travels to Ireland are well documented in the Irish press, both national and local. His visits often punctuated by official welcomes, even parades, particularly in his native Co. Limerick. It is little wonder that he gained such popularity as he was well known to be generous in his support of both family and community.

Read more: How to pinpoint where your ancestors lived in Ireland

My father and aunt well remember his support to their mother and aunts. He sponsored the education of my grandmother at a private Catholic boarding school in Co. Cork from which she graduated in the late 1920s.

Among his many contributions to family and local community are a set of three exquisite stained-glass windows of Jesus Christ, St. Patrick and St. Brigid. These are installed at the entrance to the Monagea parish church in Co. Limerick and are thought to be from the studio of Harry Clark. The three windows are dedicated to the memory of Nora Fitzgerald Hanley, Catherine Hanley (his mother) and John Hanley (his father). Through generous donations such as this, his legacy lives on in the local community.

My father remembers him as a well-dressed, stylish gentleman, always wearing a hat. In fact, almost every newspaper article references his dapper and rather formal attire, with a diamond-studded tip to his walking cane.

Throughout the 1950s John Hanley continued to make frequent trips back home to Ireland, at least every two years, before his untimely death in December 1956, in Detroit, as a result of an automobile accident.

In 2018, I visited his grave in Mt. Olivet Cemetery in Detroit with my sister, to pay our respects. Sadly, there is no headstone to mark his final resting place. That is something we hope to rectify in the near future.

Even with all of the information in the archives and personal accounts from family, there are still a lot of gaps in the story of The Baron Hanley.

It is thought that he married a woman by the name of Margaret Scanlon in 1911 and that they had a child together. Sadly, we believe that the girl died young of meningitis. Where did they live? What happened to Margaret?

When did The Baron make his journey from New York to Detroit? We imagine that he made the trip having lost all his money in the 1929 crash. Yet, somehow, based on his regular generosity and extravagant trips home, he certainly made his fortune back again, at least to some extent.

On those famed trips back to Ireland he always brought a large American car, each car often emblazoned with the Irish Tricolor and Shamrocks. My father says that the cars arrived from the Americas in that fashion. Where did the cars originate? New York, or Detroit – the home of the American Car? Where was the artwork done?

There is a wealth of stories about the “Baron Hanley” that I am piecing together to form a more complete biography of his life. It is such a wonderful and colorful life that it warrants further research and documentation to be preserved for future generations.

Perhaps your readers remember the “Baron Hanley” and can contribute to my research. e-mail collins.katrina@gmail.com.